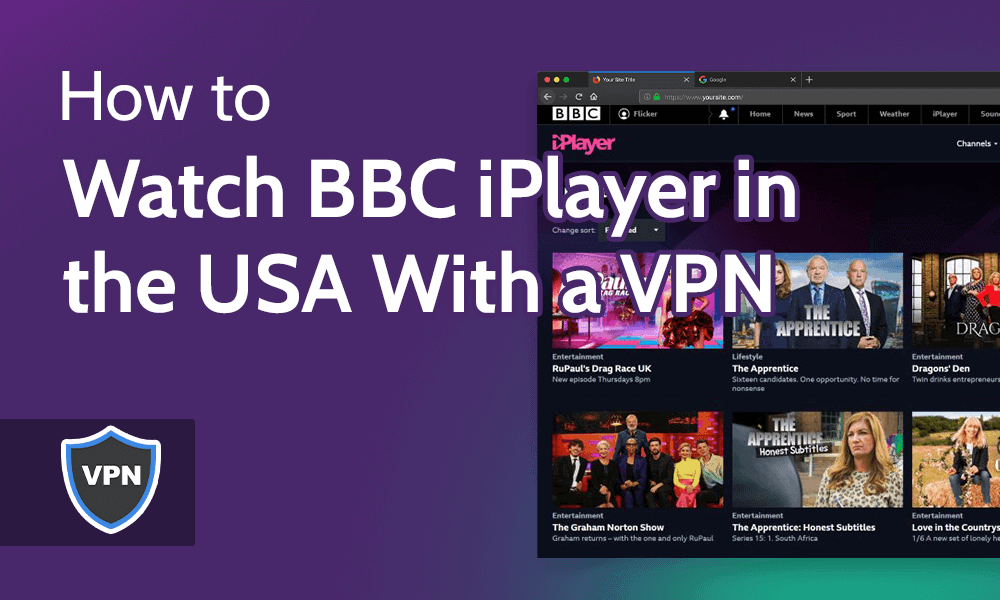 Want to watch British TV shows like Peaky Blinders? The best of them are available on BBC iPlayer. Unfortunately, there’s no BBC iPlayer USA. The streaming service is only accessible from the U.K. If you want to access BBC iPlayer in the USA, the easiest way is using a VPN (virtual private network).

You can unblock BBC iPlayer with a VPN, but you shouldn’t just pick a service at random and try unblocking BBC iPlayer. The reason is that many VPNs might not be able to unblock BBC iPlayer, and some that do will offer a subpar streaming experience. In this guide, we explain why you need a VPN, how to use it and how to select one that works well.

BBC iPlayer USA: Why Do I Need a VPN for BBC iPlayer?

You need a virtual private network to access BBC iPlayer USA because the platform uses geoblocks to restrict access only to those who are physically located in the U.K. When you access content on BBC iPlayer in the USA, you’ll see this message:

When you connect to a U.K. server, you’ll be assigned a U.K.-based IP address. Accessing BBC iPlayer with a U.K. IP address allows you to stream content on the platform because it will see you as someone who is physically located in the U.K. If you’re curious, we have a guide on how VPNs work. Along with a VPN, you’ll also need to create a BBC iPlayer account.

You can register on BBC iPlayer in two easy steps, as illustrated below.

How to Watch BBC iPlayer With a VPN From Anywhere

Once you’ve created an account on BBC iPlayer, you’re ready to start streaming. British law does require viewers to have a U.K. TV license, but BBC iPlayer doesn’t proactively verify if you have one.

As long as you have a VPN, you should be able to stream what you want from BBC iPlayer in the USA. When asked if you have a license, select “I have a TV license. Watch now,” and you’re good to go.

Can I Use the BBC iPlayer App on My Mobile or Smart TV?

In either case, you’ll still need to use a VPN to watch BBC iPlayer content. Most VPNs have an app for mobile devices, but if your smart TV doesn’t support the VPN app, you can always install the VPN on your router.

The 3 Best VPNs for BBC iPlayer

BBC iPlayer proactively blocks VPN users. A lot of VPNs can assign you a British IP address, but few can get past BBC iPlayer’s geoblocks. Below, we discuss three of the best BBC iPlayer VPNs that not only bypass the platform’s geoblocks, but also offer top-notch streaming performance.

ExpressVPN easily unblocks BBC iPlayer. It offers an excellent combination of lightning-fast connection speeds and unparalleled ability to get past BBC iPlayer’s geo-restrictions, which means you’ll never have to wait while the video loads on the screen. The VPN service has British servers across several locations in the U.K. so you can always try a different VPN server to stream BBC iPlayer content.

In addition to helping you watch some good old British TV, ExpressVPN also offers excellent security and other features. We talk more about them in our ExpressVPN review if you’re curious. Given the premium feature set, ExpressVPN commands a higher price tag. If you don’t mind spending a little extra, ExpressVPN is an excellent choice. There’s also a 30-day money-back guarantee if you want to try it out before committing.

NordVPN is another excellent VPN when you want to watch BBC iPlayer in the USA. It’s almost as fast as ExpressVPN in the U.S. and even faster than ExpressVPN in some regions. The VPN service has more than 440 servers in the U.K., which means you’ll always have additional servers to try if one of them is overloaded.

The double VPN feature also adds another layer of security and minimizes the possibility of BBC iPlayer detecting VPN usage. Alternatively, NordVPN also offers dedicated IPs. You can use a dedicated British IP address to access BBC iPlayer too. Learn more about what NordVPN offers in our NordVPN review.

NordVPN is a great value for the money, especially given its features and performance. However, you can still take it for a spin with the 30-day money-back guarantee.

If you want to stream BBC iPlayer free, Windscribe is one of the best free VPN services. Free VPNs are typically insecure, unreliable and slow, but not Windscribe. On the contrary, Windscribe offers fast connection speeds and reliably bypasses geo-restrictions.

You get 10GB of data on the free plan, which renews every month, and access to two U.K. server locations. Plus, Windscribe’s servers are optimized for streaming and can also access other popular streaming services like Netflix and Amazon Prime Video. You can learn more about this excellent free VPN service in our Windscribe review.

Windscribe only offers a three-day money-back guarantee, but that’s understandable given the generous free plan.

How Can I Watch BBC iPlayer USA Free?

BBC iPlayer is a free streaming service, but to access it from the USA, you’ll need a VPN. The best VPN services aren’t free, but you can use the 30-day money-back guarantee to stream content free for 30 days. If you decide to discontinue using the VPN service, you can always get a full refund.

Can I Use a Free VPN for BBC iPlayer US?

Yes, you can use a free VPN for BBC iPlayer U.S., but there’s a catch. Free VPNs are usually unreliable, slow and insecure. They often fail to bypass geo-restrictions, lack a good server network and offer a poor streaming experience. There are a few exceptions like Windscribe that are excellent, but free plans typically come with a few limitations like a data cap.

What Channels & Shows Can I Watch on BBC iPlayer?

You can watch some of the most popular U.K. TV channels on BBC iPlayer. The list of BBC iPlayer channels includes:

You can watch British TV shows on BBC iPlayer without a TV license. The most popular shows available on BBC channels include:

Can I Watch BBC iPlayer Offline?

You can only watch BBC iPlayer content offline if you’ve downloaded it. Otherwise, you’ll need an active internet connection for streaming TV shows on BBC iPlayer.

BBC iPlayer has an excellent collection of popular British TV shows. It’s a free service, so you can view your favorite shows on demand, as long as you have a reliable VPN. Using a VPN allows you to bypass the platform’s geoblocks. It’s also important to not just choose any VPN.

An ideal VPN service should be able to bypass geoblocks on BBC iPlayer and offer good connection speeds.

Have you used a VPN for streaming TV shows on BBC iPlayer first? If yes, which one, and how was your experience? Let us know in the comments below, and as always, thanks for reading.