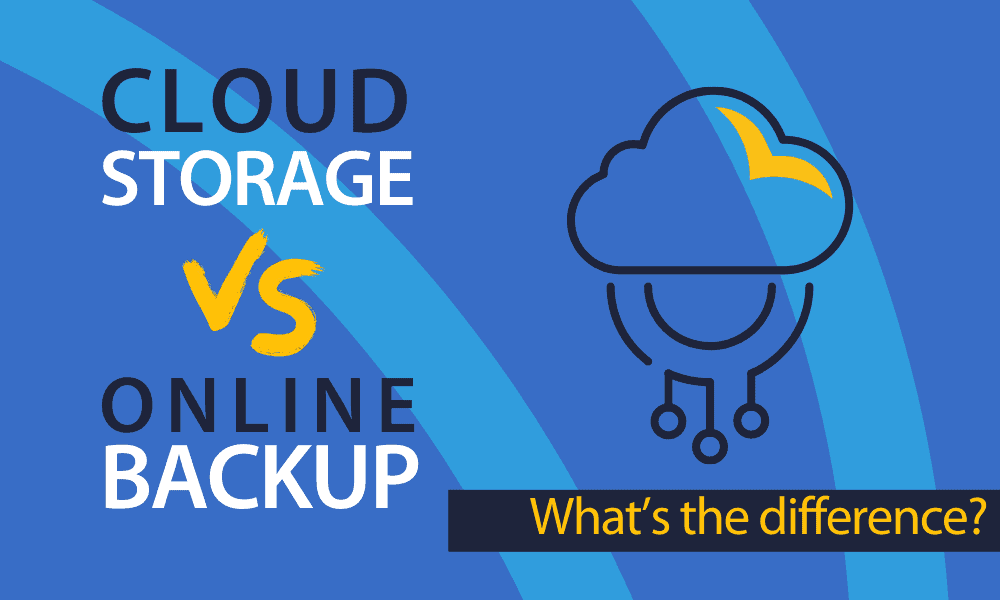 There are many good reasons to keep copies of your computer files in the cloud. There are also many excellent software options that will let you do so. However, choosing the wrong tool for your needs usually ends up a bit like trying to fit a square peg in a round hole.

Understanding the precise difference between these two oft-confused technologies and what each can do for you is the critical first step to finding the best cloud storage services or best online backup tools for your precise needs.

In this article, we’re going to help you do just that. With that knowledge in hand, you’ll then be able to look at the services detailed in our cloud storage  and online backup libraries with a sharpened point of view, in addition to giving your nerd credibility a nice boost.

Before we dive into what’s different, though, let’s talk about what’s the same: the cloud.

Cloud Storage vs Online Backup: What is the Cloud?

The term “the cloud” itself is as much a marketing buzzword as it is meaningful technical jargon, coined in the mid-90s (probably) by Netscape executives dreaming of a limitless future (remember Netscape?).

In this case, cloud refers to software that runs on a remote network of servers, as opposed to localized on a computer. If that sounds kind of like the Internet, well, that’s because it is: the cloud is software running on the Internet (and more besides: check out our article on cloud terminology for the details).

There are private clouds, owned and used by a single company or household (find out how to setup your own personal cloud storage) and public clouds, which are usually sold as a service. However, both private and public clouds let you access the same software and information from any computer authorized to do so.

Both cloud storage and online backup work by hosting files in the cloud and let you access those files from different devices, including computers and smartphones, so long as those devices are connected to the Internet.

While the infrastructure may be similar, however, the general behavior of cloud storage and online backup sets them apart and gives them very specific, different, purposes.

We’re probably not going to blow you mind by telling that the goal cloud storage — or online storage, if you prefer — is storage.

In the mid-90s, when a bunch of soon-to-be-extinct Netscape executives were coining a word that wouldn’t become popularized until more than 10 years later, the average home hard drive ran between 400 and 1000 megabytes. That, today, would hold about a weekend’s worth of selfies (or an hour’s worth if you’re a Kardashian).

While the size of hard drives have skyrocketed, the amount of data we own has more than kept pace. On top of that, replacing plodding, mechanical hard-disk drives (HDDs) with the zippy solid-state drives (SSDs) has temporarily increased the price of storage.

Because of that price bump, it’s not uncommon to see laptops with only 256GB of storage built into them. On occasion, you’ll even see otherwise high-end laptops packaged with 128GB of storage. That’s okay, though, and cloud storage is the reason why.

Let’s look at Sync.com as an example of how cloud storage works: it happens to be one of our personal favorite cloud storage services, as you can read about in our Sync.com review. In part, that’s because it provides zero-knowledge encryption and a host of other excellent cloud security features.

It’s also because Sync.com is one of the best deals in cloud storage, presently costing about Cloud Storage vs Online Backup: What’s The Difference in 2022? for 2TB of storage.

That 2TB storage can be used to supplement your hard drive. Meaning that, rather than storing all of your pet pictures and UFO-sighting videos on your laptop, you can store them in the cloud instead.

On top of that, you can access that storage space from just about any browser on any device you own, too. Most cloud storage services, including Sync.com, also make mobile apps for Android and iOS to access and store data.

Extension of the physical storage capability of your device or devices is the defining and essential feature of any cloud storage solution. Modern solutions — those that have risen above the fray — tend to do a bit more, though, with two features more common than others: sync and share.

Sync, short for device synchronization, is a cloud storage feature that lets you edit a file on one device and have those edits reflected on another device in near real-time. The idea is credited to Drew Houston, the founder of Dropbox, who claims to have come up with it after he realized on a bus trip between New York and Boston that he left his USB drive behind.

The basic mechanism behind Drew Houston’s conception, and the basic mechanism used by most cloud storage services offering sync to day, is a “sync folder.”  A sync folder is a folder that looks and behaves pretty much like any other folder on your hard drive, except that files placed in that folder are both stored on your drive and the cloud.

Any device with the cloud storage client installed on it will have this folder installed, too, which is mirrored across all devices connected to your cloud storage space. The cloud is the middleman, passing updates made on computer to the others.

One of the problems with sync, however, is that it stores files both in the cloud and on your hard drive. That, you may have realized, seems to defeat the essential value proposition of cloud storage that we laid out earlier (storage supplementation).

To account for this, many cloud storage services offer either a separate folder that doesn’t synchronize content or a feature called “selective sync” that lets you turn sync off for content if you don’t want kept both on your hard drive and in the cloud. Some, including Sync.com, have both.

As it is an Internet-based service, the usual mechanism behind cloud storage file sharing is the generation of a URL pointing to the file — or even a folder of files — that you want to share.

You can copy and paste that link to distribute it manually, such as in a Slack channel, or sometimes automatically send it via email or post it to social media. Some services, like pCloud (yes, we have a pCloud review), also let you password protect and add expiry dates to those URLs — or even make them zero knowledge.

That’s all there is to sync and share, really, except to say that there are several business-oriented cloud storage services today that are more built around the productivity and collaborative aspects of those two features than they are around supplementing your hard drive space. They’re called “enterprise file sync and share” services, and you can read about the cream of the crop in our best EFSS buyers’ guide.

Before we get into online backup, it’s also worth a mention that some cloud storage services integrate with software-as-a-service tools like Microsoft Word Online and Google Docs. However, that’s mostly restricted to the bigger names in the market, most notably Dropbox, Google Drive and OneDrive.

Putting it another way, online backup is about disaster recovery. It’s so that a glass of spilled milk — in this case having disappeared between the cracks of your keyboard — really isn’t worth crying over.

Tipped beverages are just one way to wreak havoc on the files stored on your hard drive, too. Flooding, fires, loss, theft — there are too many ways to count that you can lose your data prior your hard drive inevitably reaching the end of its lifespan.

That lifespan, according to a study conducted by online backup vendor Backblaze, is about 1.5 years for roughly five percent of HDDs. That initial death toll is mostly due to faulty construction. After that, the failure rate levels off to one percent a year for the next three.

Besides that, your hard drive is spinning on borrowed time: SSDs may extend that lifespan considerably, of course, perhaps even decades. However, that’s a lot of glasses of milk (milk is a metaphor for beer, right?) that didn’t get spilled.

Without online backup, assuming your hard drive is still in your possession, you can pay a computer repair shop perhaps hundreds of dollars to try and recover some of your data. You can also try a data recovery tool like one of those mentioned in our best data recovery software reviews.

Online backup is the better option. Most such tools run continuously to ensure that files are replicated in the cloud almost as soon as they’re created or changed. If you prefer, most also let you set scheduled backups so that your backup can run at night, when the process is less apt to hog system resources.

Carbonite Home is a good example. From within the desktop client, you can tell it backup continuously, once a day or to not backup between certain hours.

Cloud storage solutions don’t have scheduling capabilities, but the bigger reason they’re not really suitable for hard-drive backup is that they also don’t retain your file-system structure because you end up having to put everything into a sync folder.

Online backup services retain your file system structure and let you restore everything back the way it was in case you need to rebuild your hard drive.

Beyond those online backup features, there are a number of others that differentiate one backup solution from another.

Some, like Backblaze, take advantage of the fact that they’re unlimited to simply backup all common file types (read all about unlimited backup in our Backblaze review). There’s little need for you to do much of anything other than install the client to ensure that all of your previous photos, videos, emails and documents are included in your backup plan.

Other online backup services, like Carbonite, require that you manually tag every folder and file you want to protect outside of some folders that are automatically suggested by the software.

The basic idea is the same for all online backup tools, however, and that’s faithful replication of your hard drive.

Many online backup services, including Carbonite, let you share files. However, usually those capabilities aren’t quite as honed as a good cloud storage service.

Some cloud services go a bit further in blurring the lines between storage and backup. Backup service SpiderOak (read our SpiderOak ONE review), for example, lets you sync any files added to your backup plan. Acronis Cyber Protect Home Office (read our Acronis Cyber Protect Home Office review) and IDrive, two more consumer backup services, let you sync files regardless of whether they’re part of your backup plan or not.

Questions or comments? Use the comment section below to drop us a line — and thanks for reading.