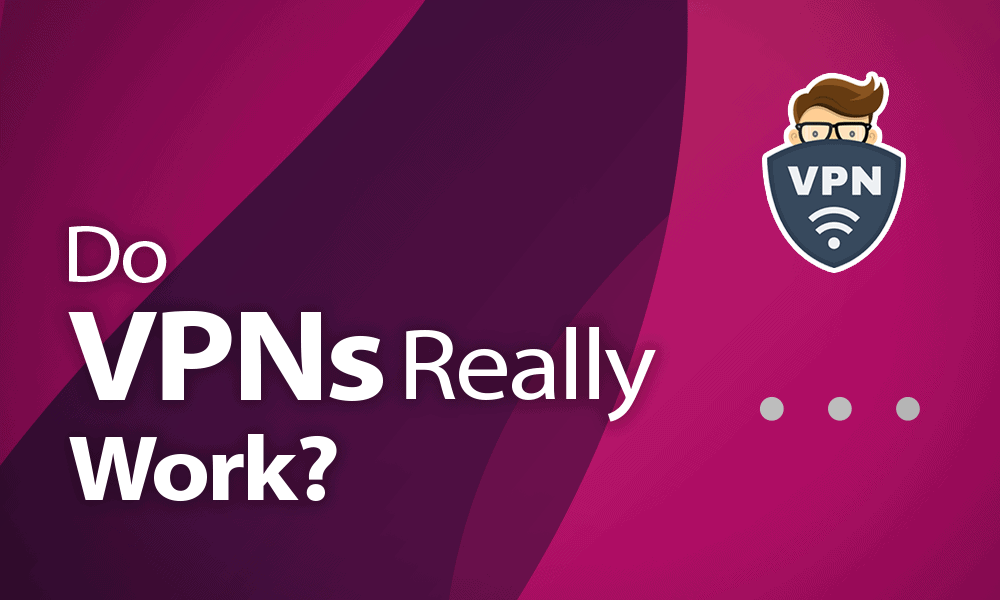 Here at Cloudwards.net, we talk a lot about the best virtual private network services on the market. From guides on the best VPN for Hulu to the best VPN for Nepal, we’ve run the gamut about which services to use for various situations. In this guide, we’re taking a different approach, talking about if VPNs work and the limitations that come into play while using one.

If you’d rather not deal with the nuts and bolts, just head over to our ExpressVPN review. Over the years, we’ve tested ExpressVPN countless times, and in every evaluation, it simply works (even the new ExpressVPN Lightway protocol looks promising). Plus, there’s a 30-day money-back guarantee in place, so you can get started risk-free.

VPN apps really work, but that depends on your definition of “work.” As we explain in our article about what a VPN is, the tech is pretty simple to understand. It’s a private network — one that only users with the proper credentials can access — that’s created virtually.

As we explained in our guide on how secure VPNs are, the effectiveness of this virtual private tunnel changes from provider to provider.

The concept of a VPN works, and as long as you use a reputable service like ExpressVPN or NordVPN, your connection will be secure. However, even more so than other software, there are many services posing as VPNs that are nothing more than a scam. For example, Hola VPN is basically just a botnet, despite advertising itself as one of the top free VPNs.

Using a VPN for Torrenting and Streaming

Thankfully, the majority of VPN services available today are legitimate, at least to a degree. Services like Hola VPN are usually no more than a flash in the pan; so as long as you do some basic research, you should be fine (read our Hola VPN alternatives guide).

At least you should be fine when it comes to not getting scammed. Just because a VPN is legitimate doesn’t mean that it works in every application. Torrenting and streaming are two of the main reasons to use a VPN, but some services are far better suited for these tasks than others.

Hide.me, for example, can’t break through a geoblock to save its life, despite being a solid service otherwise. Meanwhile, ExpressVPN took the crown in our best VPN for streaming and best VPN for Netflix guides. Similarly, IPVanish is an attractive and easy-to-use VPN with questionable security, while ExpressVPN ranks at the top of our best VPN for torrenting guide.

Navigating the VPN market is tough, especially with so much variation between services (just read our fastest VPN guide to see that in action). At Cloudwards.net, we consider all of the many factors that make up a VPN service when we review it, so know that when we recommend a service, we mean it.

How Effective Are VPNs?

Now that you understand how VPNs operate, and the fact that they can actually work, it’s time to talk about effectiveness. In this section, we’re going to cover how effective VPN security is, as well as the limits of a VPN when it comes to user privacy.

Let’s start with security. With your normal internet connection, your internet service provider handles all of the details. You send a request to your service provider’s DNS servers, they route the connection properly, and a channel is opened that allows internet traffic to pass back and forth.

A VPN sits between your initial request and your internet service provider. Instead of connecting to your ISP, you connect to a remote VPN server. This connection is encrypted, and once your requests reach the server, they’re anonymized and decrypted, then sent to the open internet.

What results is a connection that looks like it’s coming from the VPN server, replacing any personal information, like your IP address.

There are two points of pressure when it comes to a VPN connection. The first is the encrypted tunnel between your computer and VPN server. There are multiple different encryption methods, but we recommend AES-256, when available. It’s well-documented and highly secure, with no known exploits. If a VPN service has perfect forward secrecy, like ExpressVPN does, it’s even better.

The second potential failure point is with the VPN server, where your requests are anonymized and decrypted. Unfortunately, there’s not a whole lot you can do to verify this point, short of using a well-established VPN service with a good privacy track record (Mullvad and ProtonVPN come to mind).

“Privacy” and “anonymity” — or some form of either — are top words on most VPN websites, and they’re often used interchangeably. The purpose of these words is to drive a single point home: VPNs protect you online. However, allowing the two to be synonymous is not only inaccurate, it’s also dangerous.

For example, say you live in a crowded cul-de-sac or bustling apartment complex. If you were anonymous, none of your neighbors would know who you are, so much so that none of them would’ve ever seen your face.

To stay fully anonymous in this situation, you could never leave your home, the postal service couldn’t know you live there and you could have no identifiable markers. Some would argue even living around others would break your anonymity.

The situation above sounds ridiculous, and it is. More realistically, you may not know your neighbors on a personal level, and you may choose to keep details of your life private. That’s privacy, but it’s not anonymity.

You can apply the same concept to VPNs. Staying anonymous online is a matter of simply avoiding the internet entirely. VPNs don’t keep you anonymous; they keep you private.

With a VPN, you can choose what data you hand over and what data you don’t, as well as dictate the “who, what, where, when and why” of your browsing habits. Others may be able to see these browsing habits in one form or another. Still, you have control over how that information spreads.

Is a VPN Necessary?

You should use a VPN. If nothing else, a VPN protects your online privacy by preventing corporations, ISPs and government agencies from tracking you. In the U.S. and many other countries, VPNs are legal. Using one is simply an exercise in online privacy, giving you control over how you protect your data.

In the more likely event that you want to torrent or stream Netflix from other countries, a VPN is essential. Using one removes geoblocks and allows you to experience the internet of the world, rather than just the internet of your country.

For those who are completely disinterested in their online privacy, a VPN is a poor investment. For everyone else, a VPN is a great choice.

As long as you stick with providers like ExpressVPN, CyberGhost and NordVPN (which is also the best remote access VPN), your online data will be protected from third parties, all while giving you the chance to experience a more open internet. If you want more recommendations, make sure to read our best VPN guide (linked above).

Are you still on the fence about using a VPN? Why or why not? Let us know in the comments below and, as always, thanks for reading.