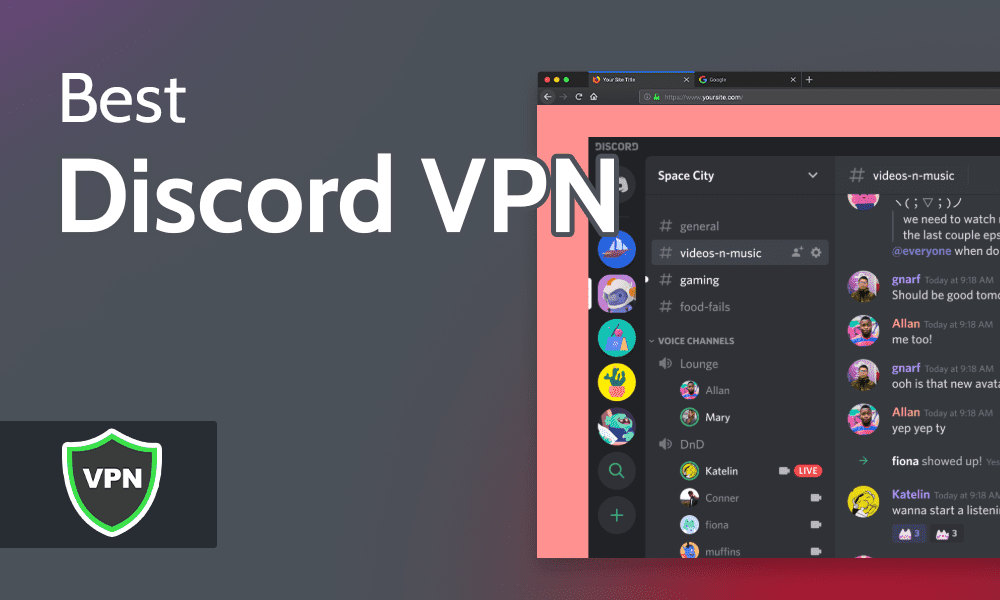 Discord is one of the easiest ways to communicate online, whether you’re talking to your in-game teammates, your friends or your classmates. It’s a free platform that we get into detail on in our What is Discord? article, but the gist of it is that you can create or join a server and communicate with text, voice and video chat. So where does a Discord VPN come into play?

Well, with social networks, many schools impose an IP ban, which means that the school computer’s IP address is restricted from accessing the platform. In addition to this, many restrictive countries, such as China, restrict access to apps like Discord. Tunneling your connection through a VPN server can help you bypass both restrictions.

There are a lot of VPN providers that can be used with Discord. We picked three that do a great job at bypassing IP ban situations, while ensuring excellent performance and a solid focus on security. Spoiler alert: ExpressVPN is the best tool for the job.

What Makes the Best Discord VPN?

The most important thing is for the VPNs to be able to bypass an IP address ban and work in restrictive countries. All three of the VPNs below do that by giving you a new IP address and hiding the fact that you’re using a VPN.

The other criteria we looked at were how safe the VPNs are from DNS and IP leaks, how they perform and how good their security is. Whichever one you pick from the list below, you’ll be able to bypass IP ban situations with ease, but there are a few key differences between the providers.

ExpressVPN is the most expensive of the bunch, but it’s certainly worth it if it fits your budget. NordVPN and Surfshark are somewhat more affordable in the long run, and both bypass IP bans without much trouble. There are some features that set the three apart, so let’s look into the VPNs up close.

The 3 Best VPN Services for Discord

These three VPN services will allow you to access Discord even if you’ve got an IP address ban on your device or you live in a restrictive country. Each of them will perform admirably and secure your internet connection, but which one should you go for? We’re kicking things off with our top choice, ExpressVPN.

If you’re looking for a no-compromise solution, no VPN does it better than ExpressVPN. It tops our list of the best VPNs for a variety of reasons, and some of those reasons make it the best choice for a VPN for Discord too. It can bypass bans on IP addresses, it hides the fact that you’re using a VPN, and it’s fast and secure. We cover it in more detail in our ExpressVPN review.

ExpressVPN will give you a new IP address and make sure an IP ban can’t keep you from accessing your favorite Discord server. It also works without any hiccups even in restrictive countries, and its obfuscated servers will ensure that your VPN usage goes undetected.

At the core of ExpressVPN is its Lightway protocol. It’s been built from the ground up to ensure the ideal combination of security and performance, and is faster and easier to audit than OpenVPN, which is one of the most popular protocols out there. It uses a relatively small codebase, which allows the entire protocol to be as lightweight as possible.

ExpressVPN’s major downside is the pricing. Even if you opt for the yearly plan, it’s significantly more expensive than the competition. With that in mind, if you want access to Discord regardless of where you are and your real IP address doesn’t allow that, ExpressVPN is certainly worth it. In case you don’t like it, there is a 30-day money-back guarantee.

NordVPN’s forte is its speed, which is useful for bandwidth-heavy video calls. If you only need it to unblock Discord, though, you’ll probably be interested in its obfuscated servers, which hide the fact that you’re using a VPN. It also has security features that keep your real IP address hidden and your connection encrypted.

NordVPN has over 5,000 servers in 60 countries, meaning you’ll be able to find a server close to you that gets you the best possible performance. The apps aren’t exactly impressive, though, and some of its more advanced features might be difficult to set up and use. You can find out more in our NordVPN review.

NordVPN takes a different approach from ExpressVPN. Rather than doing everything from scratch, NordVPN took WireGuard, improved it from a privacy standpoint and called it NordLynx. WireGuard (and NordLynx, by extension) is a modern and fast VPN protocol that doesn’t skimp on security. This makes the VPN service excellent for Discord users who don’t want to compromise on performance.

Price-wise, NordVPN is certainly far from a free VPN, but it’s not that expensive either. A two-year subscription will lower that price by quite a margin from the monthly cost, and you’re covered by a 30-day money-back guarantee in case you don’t like it.

Surfshark has a bit of a theme going, with unlimited bandwidth, unlimited data and unlimited simultaneous connections. This makes it the perfect VPN for Discord users who want to share a subscription and get access to Discord as affordably as possible. You can find out more about it in our Surfshark review.

Surfshark’s server network is impressive, with 3,200 servers in 95 countries. The VPN also gets you multi-hop servers that tunnel your connection through not one, but two secure servers. This adds a bit more security to your connection. It’s one of the fastest VPNs for downloads and uploads (important for Discord calls), but its latency tends to be quite high.

If you’ve got friends or classmates who also struggle with IP bans on Discord, Surfshark’s unlimited simultaneous connections allow you to share a subscription. You can connect as many devices as you want at the same time and enjoy Discord despite regional restrictions (or any restrictions, for that matter).

Even if you don’t want to share a subscription, Surfshark is the most affordable VPN on our list. True, its monthly plan is expensive, but subscribing for two years brings that price down significantly. You also get a 30-day money-back guarantee.

How to Use Discord With a VPN

Using Discord with a VPN service is fairly simple. All you need to do is pick your favorite VPN from the list above, download and set it up, then use Discord as you normally would. Here’s a short step-by-step guide that shows how to do so. We’ll use ExpressVPN as an example, but the steps for another VPN will be very similar.

Whichever of the aforementioned VPN services you pick, you’ll be able to access your favorite Discord server and regain access to your text and voice chats, despite IP address bans and restrictive countries’ laws. ExpressVPN takes a no-compromise approach, but comes at a price, whereas NordVPN and Surfshark are easier on your wallet.

If you hit any hurdle when using Discord, fret not. We have scoured the web to find the most common issues users face with Discord. Our comprehensive ‘Discord is not working‘ has a solution to these issues.

Do you want to access Discord safely while you’re at school? Maybe you live in a restrictive country and want to enjoy Discord communities — which one of the VPNs above is your choice? Let us know in the comments, and thank you for reading.