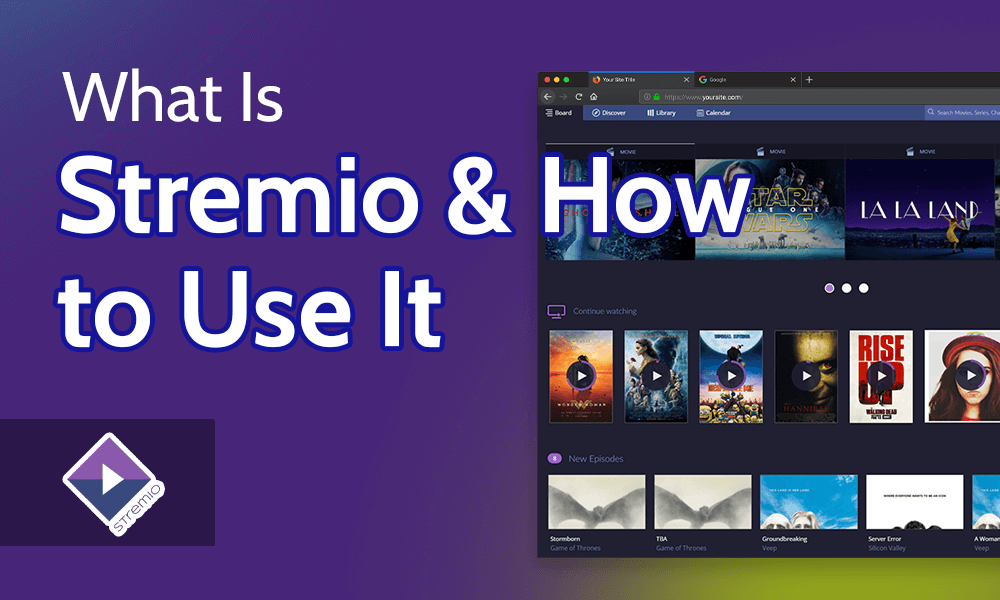 Cord-cutters view Kodi as a one-stop solution to free streaming. Kodi is great at enabling viewers to access a giant database of movies and TV shows. However, did you know there’s another app called Stremio you can use to stream a movie or TV show for free? In this guide, we’ll answer the questions: What is Stremio? Is Stremio legal? and How do I use Stremio?

You can install the Stremio app on several devices including Windows, macOS, Linux, Android and iOS. The iOS app doesn’t support add-ons, though. The streaming app isn’t available for smart TVs, but you can always cast the media to your Apple TV or Chromecast.

Stremio is a lesser-known alternative to Kodi that allows you to stream movies and TV shows for free. Unlike many shady apps out there, Stremio is reliable and safe. However, since it’s not the most popular streaming tool, you might have a hard time finding a reliable source of information for Stremio.

You can also watch web channels, sports and TV channels or listen to podcasts on Stremio. None of the content is owned by Stremio; it’s just a media center application where you can watch content from different streaming platforms. It can also stream content through torrent files and magnet links, eliminating the need to download the content to your computer.

Yes, Stremio is a completely free, open source tool. It’s free to download and there are no in-app purchases. You can stream content for free and install add-ons at no cost. Stremio sustains its operations by running non-intrusive ads. The founding team owns an ad company called AdEx (a separate legal entity) that focuses on ads that are transparent and preserve privacy.

Yes, Stremio is legal. It’s simply a platform that facilitates streaming from other streaming platforms and sources through a P2P network.

Stremio is a legitimate app available on the Apple app store and the Google Play Store. While the use of P2P networks isn’t illegal, streaming copyrighted content without permission is, and that’s why you should use a VPN (Virtual Private Network) when streaming via Stremio.

Should I Use a VPN With Stremio?

VPNs encrypt your internet traffic so no one can intercept it and look at your online activity. In some cases where the ISP has been throttling your connection speed, using a VPN will also improve the connection speed, so you can enjoy buffer-free streaming.

You’ll also need a VPN if you’re in a country with heavy censorship. For instance, if you’re in China, you won’t be able to access Stremio (or any other non-Chinese streaming apps) without a VPN.

We recommend ExpressVPN as the best Stremio VPN because it offers top-notch security and doesn’t keep activity logs. It’s also the fastest VPN out there and comes with everything you’d want from a premium VPN.

How to Install Stremio

Installing Stremio is fairly straightforward. Since you don’t need to pay for a subscription, you can simply download the app, sign up (or use the guest login option) and start streaming all your favorite movies:

How to Use Stremio

If you’ve never used the Stremio app before, you might need some help navigating the interface. While finding content is fairly straightforward, you’ll need to install relevant add-ons to watch movies, TV shows or any available content for free. You can also build your own Stremio add-ons if you know how to code Node.js.

Watch a Movie or TV Show With Stremio

When you launch the app, you’ll see the Stremio Board with movies and TV shows listed categorically. Switch to “discover” and look for the content you want to watch.

Click on an item and select a source from the right. If you haven’t installed any Stremio add-ons, there’s a good chance you’ll only see options like Netflix and Amazon Pay. If you don’t have a subscription to either of those streaming platforms, you’ll need to download Stremio add-ons.

Stremio doesn’t offer as wide a selection of add-ons as Kodi. Some add-ons have also been flagged as insecure in the past. However, you can still install most of the popular Stremio add-ons without any security concerns.

Installing add-ons is fairly easy. Click on the icon that looks like a jigsaw puzzle piece in the top-right corner. Select a category from the left and click “install” for all add-ons you want to install.

How to Watch Stremio Remotely

Stremio comes with a few advanced features too. For instance, if you’re away from a device you’ve installed Stremio on, or want to stream on a device for which Stremio is unavailable such as a smart TV or Fire TV stick, you can watch Stremio remotely.

You’ll need to enable remote HTTPS connections from one of the supported devices ahead of time to set up remote streaming. On Stremio desktop apps, you’ll need to click on the ellipsis in the top-right corner and select “settings.” Switch to the “streaming” tab from the left sidebar in the “settings” menu.

In the right pane, you’ll find an option to “enable remote HTTPS connections.” Expand the dropdown menu to the right and select one of the IP addresses. When you do this, a new option will appear at the bottom called “streaming HTTPS endpoint.” The URL next to it is where you’ll be able to stream the content you want.

Note that you’ll need to keep the app running to be able to stream remotely on a different device.

Keep Track of Your Watch History With Trakt

Trakt is a free service that allows you to keep tabs on content you’ve watched. It’s also available as an add-on for Kodi and works exactly the same way for Stremio.

If you want to use Trakt on Stremio, you’ll first need a Trakt account. Start by creating an account on the Trakt website. Launch Stremio and click on the ellipsis at the top right. Select “settings” and then click on the “authenticate” button under “Trakt scrobbling.”

Stremio takes things up a notch with the built-in calendar. While Trakt can track the content you’re watching, the calendar takes a forward-looking approach and tells you the release date of the next episode for the TV shows you’re interested in.

You can have Stremio populate the calendar with the TV shows of your choice in several ways:

Once you’ve added shows to the Stremio calendar, you can import the calendar into your default calendar app as well. To do this, click on the ellipsis icon and click “subscribe to calendar.” Missing new episodes? Not anymore.

Stremio makes it easy to find and stream content from multiple sources by bringing all of them into a single app. While Stremio itself isn’t illegal, you might still be held liable for streaming copyrighted content without paying for it. That’s where a VPN can help — we recommend ExpressVPN as the best VPN for Stremio.

Have you used Stremio before? Did you use a VPN? If yes, how was your experience streaming from Stremio with a VPN connection? Let us know in the comments, and as always, thanks for reading.