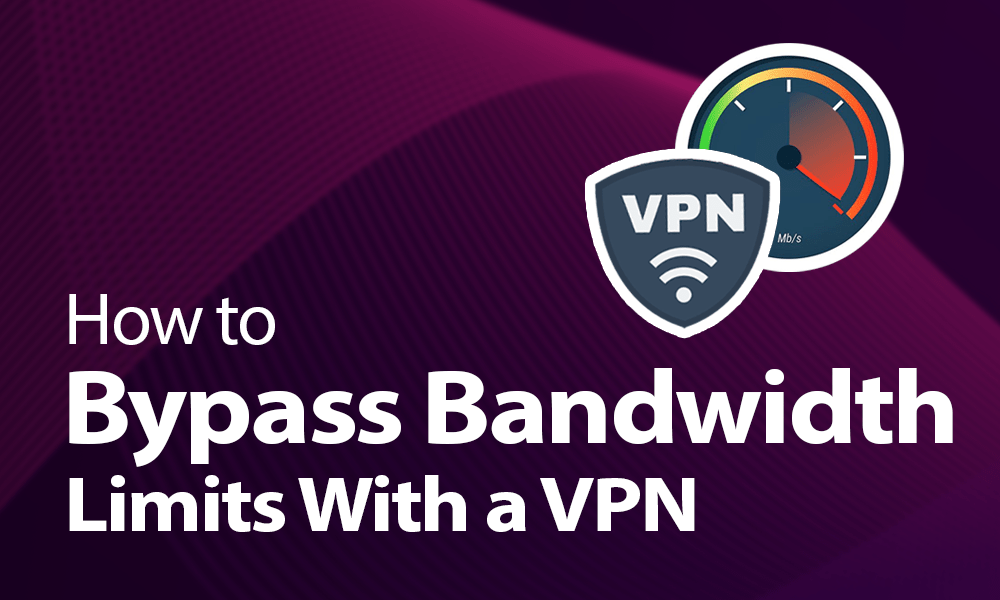 Do you experience slothy connections that come out of nowhere when streaming movies or NBA playoffs online? That’s bandwidth throttling: when your internet service provider (ISP) slows down your connection based on what you’re watching. Fortunately, you can get around ISP throttling when you learn how to bypass the bandwidth limit with a virtual private network (VPN).

A VPN gets around this anti-consumer practice, enabling you to enjoy an unrestricted online experience. In this article, we’ll use ExpressVPN — the best VPN provider — to demonstrate how you can skirt around throttling with a VPN. Keep reading also to learn why ISPs limit your bandwidth.

There are various reasons why ISPs limit your bandwidth (which we’ll talk about later). The gist of it is that it sees you using a lot of bandwidth — by streaming HD videos, downloading torrents or a number of other things — so it slows your connection down. When the ISP uses bandwidth throttling against you, you should take action. If you can’t change your ISP, your next best option is to use a VPN.

The Tor browser can also help you get around ISP throttling, but it’s super slow, which defeats the purpose. This leaves the VPN as the surefire way to easily bypass bandwidth throttling without putting further strain on your connection. So, how does a VPN prevent bandwidth throttling?

A VPN reroutes all of your internet traffic through its servers to anonymize everything you do online. This gives ISPs no chance to know when you visit bandwidth-heavy sites, like Netflix. ISPs prioritize throttling for users engaging in streaming or torrenting activities, so with a VPN you won’t be on the high-priority list. This saves you from content-based internet throttling.

Bypass ISP Throttling Your Internet Traffic: Use a VPN

For a VPN to effectively bypass bandwidth throttling, it should come packed with security features, like AES 256-bit encryption and strong VPN protocols. ExpressVPN is our favorite VPN here at Cloudwards, which is why we’ll use it to show you how to get around ISP throttling.

Your ISP may decide to impose bandwidth throttling when it notices you’re engaging in activities like streaming or torrenting. By limiting download speeds for bandwidth-intensive websites, ISPs reduce bandwidth usage on the network. That enables the ISP to serve more internet users without increasing its network capacity.

You could have also gone over your data usage limit. Some ISPs won’t disconnect your internet altogether when you exceed the set data caps. Instead, they keep you connected but throttle your internet speed to prioritize users that are still within their data limit. Sometimes that will leave your connection operating below the good internet speed for streaming, gaming or browsing.

Beyond that, ISPs may throttle connections during “internet rush hour” to ease congestion over the network. Generally, the ISPs throttle the internet connection of anyone consuming a lot of bandwidth to enable other users in the area to get regular services.

A VPN helps bypass throttling because it prevents your ISP from detecting where your traffic originates. Here are the top three services that can stop ISPs from throttling your internet speeds.

We’ll discuss each provider’s strengths (and weaknesses, if any), starting with ExpressVPN — our best VPN service to circumvent ISP throttling.

ExpressVPN is the best VPN to stop ISP throttling, thanks to its strong digital security and blazing-fast speeds. It barely puts a dent in your browsing speed, and being our best VPN for streaming, it unblocks pretty much any streaming site. Using AES 256-bit encryption and a variety of VPN protocols, it ensures your activity stays private.

Besides that, ExpressVPN uses a private domain name system (DNS) on every server to prevent DNS leaks. Doing so prevents your internet provider from seeing the type of websites you visit based on your browser’s DNS requests. Plus, ExpressVPN has a strict no-logs policy to put your mind at ease.

It’s a little more expensive than the rest of our picks, but the value it offers more than makes up for the higher price tag. Read our ExpressVPN review for more information.

NordVPN is another good VPN provider to defeat ISP throttling. With over 5,300 servers, NordVPN ensures you have a server that’s geographically close to you for faster connections.

Though it doesn’t match ExpressVPN’s speed consistency over longer distances, it makes sure you can access any geoblocked content using the “smartplay” feature.

NordVPN’s obfuscated servers conceal your VPN usage, making it look like you’re not using a VPN at all. Plus, most importantly, they make it impossible for the ISP to distinguish bandwidth-heavy traffic from simple web browsing. NordVPN is also one of the best VPNs for torrenting, plus it’s more affordable than ExpressVPN. You can read more about it in our NordVPN review.

CyberGhost is a cheap VPN solution to ISP throttling. It has around 7,800 servers across 91 countries, with a special focus in the U.S., UK and Germany. CyberGhost offers many specialty servers, like the NoSpy servers, that deliver strong data encryption and greater anonymity to keep your traffic out of an ISP’s reach.

CyberGhost also offers torrenting-optimized servers, which facilitate seamless and secure torrent downloads. However, one big disappointment is that in our testing, CyberGhost — despite its streaming-optimized servers — could access Netflix but not Amazon Prime Video, Hulu or BBC iPlayer. Read more about it in our CyberGhost review.

Can You Use a Free VPN to Bypass ISP Throttling?

Technically, yes, you can use a free VPN to get around ISP throttling, but only if you find a reliable free VPN, and those are hard to come by. You’ll rarely find a free VPN with security features to send your traffic via a truly secure tunnel. Some may sell your data to third parties or leak it on the internet, despite promising to never keep any user activity logs.

That said, some VPNs, like Windscribe, offer reliable free plans. We vouch for Windscribe because of its security and high monthly data cap of 10GB, and we have no reason to doubt its no-logs policy, too. Our list of the best free VPN providers has other effective services, as well.

If your ISP is deliberately throttling your bandwidth when it notices traffic from streaming or torrenting sites, a VPN can be of great help. We recommend getting started with ExpressVPN because it guarantees watertight digital security and excellent streaming speeds. Read our guide to learn about other instances when a VPN can help with internet speeds.

Have you ever experienced ISP throttling affecting your internet speed? Which VPN service did you use to stop bandwidth throttling from your internet service provider? We’d love to hear about your experience in the comments section below. As always, thanks for reading.