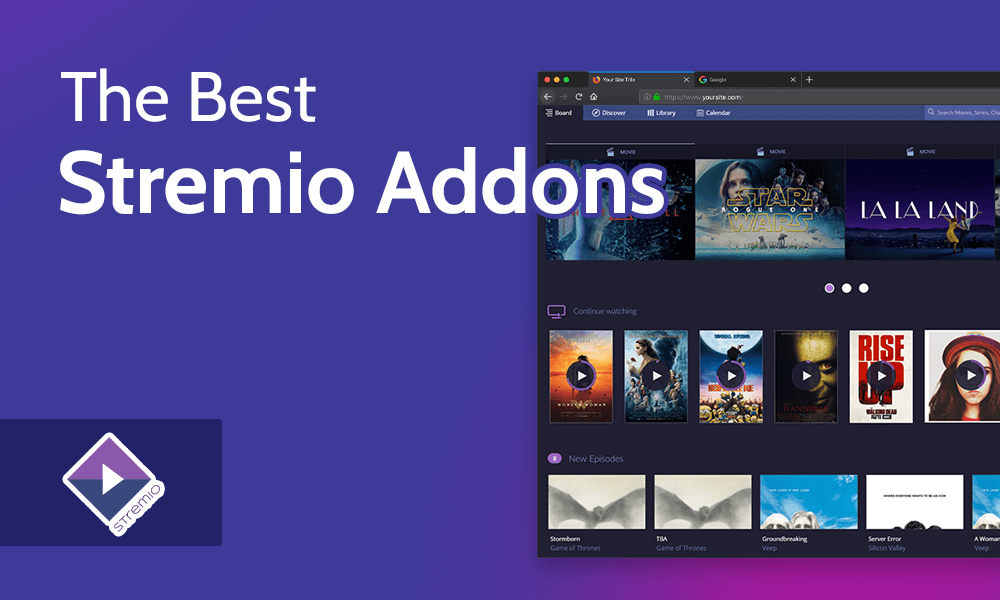 Stremio is a great app for streaming free content online. Whether you want to watch free movies or TV shows, Stremio can help. However, you’ll need Stremio add-ons for specific platforms to be able to stream free movies, TV shows or web channels from them.

For instance, if you want to stream Spiderman: No Way Home, you can install the Pirate Bay Stremio add-on. Similarly, you’ll have the option to stream it from any platform for which you’ve installed add-ons. The more add-ons you install, the more movies and TV shows you’ll be able to stream.

Stremio is perfectly legal. However, you’ll still be streaming copyrighted content, and that’s illegal. That’s why you need a Stremio VPN.

On the other hand, community add-ons (aka unofficial add-ons) are developed by Stremio community users. Stremio has no control over these add-ons. They don’t come installed by default, but you can install or uninstall them manually.

Why Should I Use a Stremio VPN?

There are several reasons to use a Stremio VPN. The most important reason you should consider using a Stremio VPN is for streaming copyrighted content. A VPN (virtual private network) can help you stay anonymous by hiding your IP address from both the websites you access and your ISP (internet service provider), allowing you to stay anonymous online.

VPNs can also help you stream with Stremio where it’s inaccessible. This includes your school or workplace networks, where streaming platforms and torrent websites are banned. It also includes countries with heavy censorship, such as China.

Using a Stremio VPN ensures online security and privacy when you stream content using Stremio. However, not all VPNs work equally well. Read our best VPNs for Stremio guide to find a VPN service that will work the best with Stremio — we recommend ExpressVPN.

You can install Stremio add-ons with one click, but since there are only a few add-ons, you might find some unfamiliar names on the list. Stremio live TV addons do exist, but we’ve excluded them as they currently don’t offer a good experience. We’ve rounded up 10 of the best Stremio add-ons below, so you don’t have to spend time researching.

Stremio has an add-on for Netflix that comes installed out of the box. If you have an existing Netflix account, you’ll be able to see which shows are available on Netflix.

However, you can no longer stream Netflix content directly from Stremio because of digital rights management issues. If you want to stream content from within Stremio, you can use other add-ons like Pirate Bay and Torrentio.

Select a Netflix show or a movie on Stremio and select the Netflix add-on. It will take you to the relevant Netflix show in your browser. Next, enter your Netflix login details to start streaming.

However, Torrentio isn’t available within the Stremio add-on library. You’ll need to go to the addon’s URL and install it from there. Once you’re done, you should see Torrentio listed as a source on Stremio.

The Pirate Bay add-on gives you access to the popular torrent website’s torrent links. This lets you watch TV shows and movies for free by pulling streams from torrent files available on the website.

You can install the Stremio add-on for The Pirate Bay by selecting the jigsaw puzzle piece at the top and searching for “Pirate Bay.” Click the “install” button, and the next time you look for any piece of content on Stremio, you’ll find the Pirate Bay add-on option to the right, provided it’s available on the website.

When you search the Stremio add-ons list for Juan Carlos, you’ll find several add-ons with a similar name. This eponymous Stremio add-on allows you to stream content using torrents.

Juan Carlos has been flagged by several websites on the internet, but most users report that it’s safe to use as long as you’re using a VPN. You can download it from here if you can’t find it in the Stremio add-on library.

Popcorn Time gives you access to EZTV and YTS — two of the most popular torrent servers. You can use the Popcorn Time add-on for streaming almost any piece of content from these platforms. Both EZTV and YTS are continually updated with fresh content.

YouTube is another official Stremio add-on that comes installed by default. As you probably already know, YouTube has a ton of content, from DIY tutorials to calculus lectures.

If you frequently watch YouTube videos, the YouTube add-on can help you watch those videos ad-free. The add-on also notifies you about new uploads and offers recommendations based on your viewing history.

Cinemeta is an official Stremio add-on, but it doesn’t stream movies and TV shows. Instead, it helps pull information about Stremio free movies and TV shows from websites like IMDb, TheTVDB, TheMovieDB and Fanart.tv, so you don’t have to look for it separately using your browser.

RARBG pulls streams from a torrent website called RARBG. It’s one of the best Stremio add-ons if torrents are your go-to choice for streaming content. The add-on allows streaming content in your preferred quality, from SD to full HD, and it usually has all the popular TV shows and movies in its library.

OpenSubtitles is one of the official Stremio add-ons and comes preinstalled. If you like to have subtitles when you watch movies or need them when streaming non-English content, OpenSubtitles is a great add-on.

Similarly, if you’re watching English content and need subtitles in your native language, OpenSubtitles’ database might have those too. In case the subtitles are synchronized, you can adjust them to improve the viewing experience.

Twitch is a popular video streaming platform where you can stream live sports events and content uploaded by gamers or creators in other categories like cooking and drawing. Installing the Twitch add-on gives you access to the entire Twitch library, so you can stream content from within the Stremio app.

How to Install Stremio Add-On

Installing Stremio add-ons is fairly straightforward once you know which add-ons you want to get. Here’s a two-step process for installing add-ons on Stremio:

How to Uninstall an Add-On

Too many add-ons can clutter up the app’s sidebar, where streaming options are displayed. It makes sense to keep only the best Stremio add-ons and remove the rest. Uninstalling add-ons is a simple two-step process:

Stremio is a great platform where you can access media servers from across the globe and enjoy hassle-free torrent streaming. However, you’ll need the right add-ons for a good experience.

Have you been using Stremio to watch movies, TV shows or YouTube videos? Which add-ons have you installed, and which one do you feel is the best Stremio add-on? Did you use a VPN when using Stremio? Let us know in the comments below, and as always, thanks for reading.