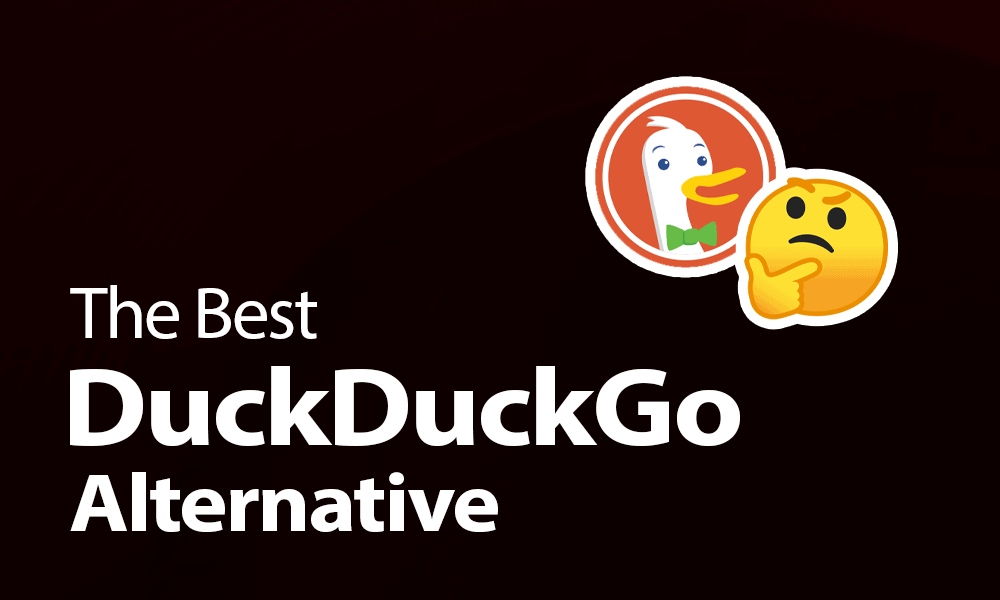 DuckDuckGo has risen to the top of private competitors to Google. Launched in 2008, DuckDuckGo took time to gain momentum, but now it’s become a favorite among enthusiasts of online privacy. It began with only 16 million queries in 2010 and recently reached 3 billion total searches in January 2022.

DuckDuckGo is the best search engine that doesn’t track your search data and use it for advertising purposes. This has made it a popular rival to the major tech companies, but there are many more private search engines to consider.

Despite its privacy-preserving nature, DuckDuckGo still derives its results from Bing’s curated index. Privacy is a good start, but some search engines can also circumvent censorship, search from independent indexes and do much more than simply leave your personal data alone. Without further ado, we’ll walk you through our favorite alternative search engines.

What Makes Other Search Engines the Best DuckDuckGo Alternatives?

Privacy is the basic requirement for a good alternative to DuckDuckGo. This means search engines that don’t save your search history, IP address, unique user agent or anything that could be used to identify you.

Usually search engines use this data to create targeted ads and search results that are relevant to your interests. For example, every time you search on Google, the company saves your search queries and uses it to curate a feed of results related to your searching habits.

Google is a particularly egregious offender because it uses data collected from other Google services — Google Chrome, Gmail, etc. — to influence what you see in the search results page. Private search engines usually don’t include personalized results as a consequence of their privacy-respecting practices. Some might find this inconvenient, but others see it as a worthy trade-off.

There’s a lot more to say about the web’s most popular private search engine, so we recommend checking out our full overview on DuckDuckGo here. For more tips on staying anonymous online, read our anonymous browsing guide here.

Aside from its privacy protections, Swisscows also uses a “semantic map” to give the user helpful search suggestions, which is a list of related search terms in a column on the right side of the page. Furthermore, Swisscow prides itself on being a family-friendly search engine that omits all adult and violent content by default.

Its location in Switzerland gives Swisscows a significant privacy advantage. By remaining outside the jurisdiction of the U.S. and the EU, Swisscows avoids the surveillance legislations of both territories, which are home to some of the most invasive intelligence agencies in the world.

Switzerland is outside the reach of the Five, Nine and 14 Eyes alliances and therefore is less likely to face the possibility of giving data to the authorities when asked. The good news is that  Swisscows wouldn’t have any user data to hand over in such a case.

Launched in 2009, Gibiru is another private service similar to DuckDuckGo, but it distinguishes itself with its use of 256-bit AES encryption to obtain search results. Gibiru collects no cookies, IP addresses or search query history from its users, and therefore cannot sell user data to third parties or identify individual users.

Its results are sorted into two columns: “all results” and “censored content.” The former is Gibiru’s complete index and the latter are all of the links that are excluded from the curated feeds of major services like Google Search.

Gibiru meets all of the criteria for a good private search engine, but not much is known about the team that operates Gibiru. We haven’t seen news of any privacy scandals involving Gibiru, so there is no particular reason to regard the search engine with suspicion. However, it would be nice to know at least a little about the people behind the scenes.

As an EU-based search engine from France, Qwant has become a major Google alternative in Europe. Its minimalist, user-friendly interface resembles Google’s, but like the best search engines, it doesn’t log your personal data.

Qwant stands apart from many private search and metasearch engines for using its own crawler and index instead of simply deriving its index from third parties. Its search results are therefore not influenced by your previous web activity, and Qwant doesn’t use cookies to save your history after you close your browser.

Once you close your browser and return to Qwant, your previous queries will not appear. Some may find this inconvenient, but it’s a worthy tradeoff for better privacy. Qwant only uses cookies to store your preferences if you adjust the search engine’s settings.

Among the more unique entries on this list is YaCy, a peer-to-peer, open-source search engine application. Even private search engines require some level of trust since there’s no way to be completely certain how a company uses your data, but YaCy is a private company that does not have a central server or proprietary software.

Instead, the software YaCy provides is a decentralized network of private computers operated by members of the YaCy peer-to-peer network, numbering in the thousands. Unlike other private search engines, there is no single company or person controlling the YaCy network. The company provides the open-source software and the community does the rest.

Every machine crawls the internet on its own YaCy instance to form an index of websites and shares the index with other peers, producing a dynamic and uncensored set of results for every search term.

The distributed nature of YaCy means there is no single legal jurisdiction YaCy belongs to. The laws of any given country or regulating body only apply to individual users, not to the whole YaCy network.

Most of the standard privacy criteria for search engines is irrelevant here. Using YaCy requires downloading the Java-based open-source YaCy software and searching the internet through your browser. Any browser will do.

Rather than returning results from a single search index, Searx is an open-source metasearch engine that indexes search results from dozens of search engines at once. Searx doesn’t track the user’s IP address or history, nor does it allow its sources to track user data, even if Searx is sourcing from a major brand.

Like Dogpile, Searx doesn’t have a single index, but rather it has dozens of instances run by different Searx users, each with multiple sources and varying results. You can even create your own instance if you put some work into it, but there are plenty of public instances available on searx.space that you can use right away as your primary search engine.

After entering a search query, Searx retrieves its results and includes the name of the search engine(s) Searx originally collected the link from. You can adjust Searx’s settings to choose which sources to include links from, and which to avoid.

Google sometimes blocks Searx requests, but there are still dozens of other search engines and sources Searx uses. Not only is it a private search engine, but it also indexes links that don’t show up in the curated results of Google and other major services.

DuckDuckGo uses Bing search results, and metasearch engines like Searx take their results from a variety of sources. Mojeek is a notable option for using its own crawler and algorithms to create its search index while simultaneously protecting user privacy.

Mojeek was the first search engine to officially adopt a “no tracking” privacy policy when it was launched in 2006. It doesn’t keep advertising profiles on its users or collect much personal data at all. As a consequence, Mojeek features a clean interface that’s not loaded with ads, targeted or otherwise.

Mojeek’s biggest disadvantage is its small index size. It’s no surprise Google returns more web pages than Mojeek, so sometimes it will be necessary to use a different search engine if you can’t find what you’re looking for. Aside from that, Mojeek is at the very least a private search engine, and you don’t have to worry about it tracking and selling your personal data.

Mainly known for its private web browser, Brave is now developing its own privacy-oriented search engine. Brave Search is currently in a beta phase and is promoted as a private engine that uses its own index and search algorithm. Thus, it doesn’t have to completely rely on third-party indexes, whether from the major tech platforms or others.

At the same time, Brave Search mixes its own index with that of third-party search engines. The proportion of Brave’s search results to other search engines varies from query to query, and each search page comes with a “results independence” metric showing how much of the search results originate from Brave’s index.

Brave insists that their users’ privacy will always be protected, no matter how many results come from other sources.

Brave Search is still in its beta phase at the moment, so we expect to see significant changes as time goes on. For now, it’s still a good search engine for everyday use. Unsurprisingly, it has replaced DuckDuckGo as the Brave browser’s default search engine.

There are a wide range of alternative search engines, from the major brands everyone knows to the privacy-focused alternatives. Uncensored search results and independent indexes are important factors to consider, as well as good privacy practices.

DuckDuckGo is a very good search engine in its own right, but it’s not the only one. If you’re jumping ship because of usability issues, our how to use DuckDuckGo guide could change your mind.

What do you think is the best private search engine? Is privacy all you need in a good alternative to DuckDuckGo, or do you need advanced search features like an independent index and metasearch capability? Let us know what you think in the comments, and as always, thank you for reading.