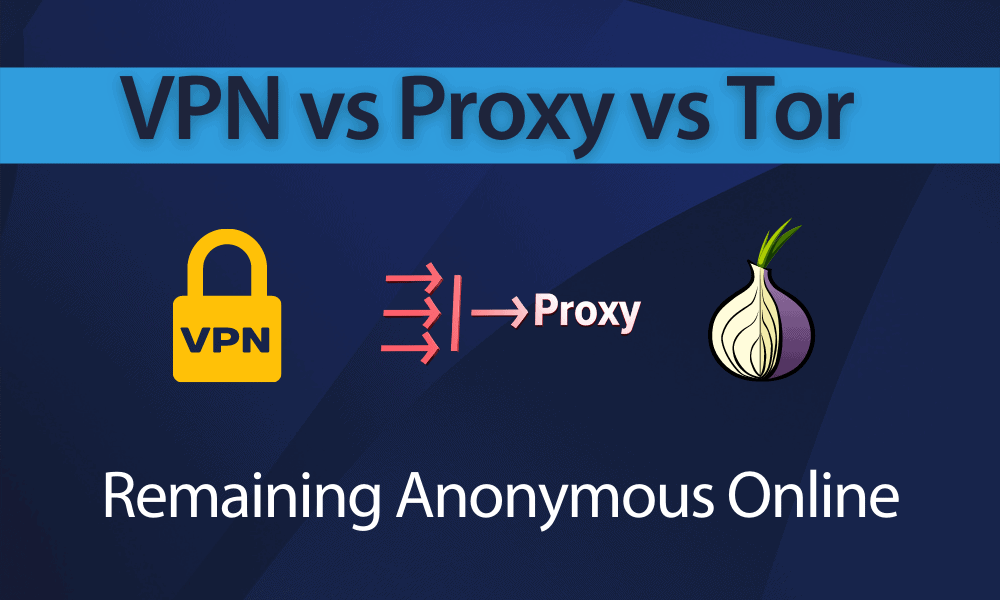 Remember that old meme about hiding your identity behind seven proxies? As it turns out, no matter how many proxies you go through, your identity is never hidden. Proxies don’t encrypt any data, and exposing you is just a matter of tracking your signal back to its original source. Only a virtual private network (VPN) can truly keep you safe. This comparison will see the age-old VPN vs proxy vs Tor debate finally put to bed.

Proxy servers just aren’t safe enough, and the Tor network is run by volunteers who can access your data. That said, both have their uses. We’ll discuss what those are and how VPNs, proxies and Tor compare. At the end, we’ll give you our recommendation on which tool to use, so read on.

VPN vs Proxy vs Tor: Explaining the Basics

We’ll start this comparison off by going over what each of these services is and isn’t. To that end, we’ll explain what proxy servers, VPNs and the Tor network do and how they work. Then we’ll talk about how and when you should use them to help you choose the best service for your use case.

What Is a Proxy Server?

When you connect to a website, your connection is sent to the server the website is hosted on. That server can see a load of information about your connection, including your IP address and relative location.

However, proxy servers have a glaring issue in that your connection isn’t secured with encryption. Basic route tracing, which can easily be done online for free, will reveal your true IP address and location.

If you’re doing anything questionable, then your internet service provider, government or anyone else who can access your stream of data can see it. Even so, proxies have their place. There are different types of servers you can use depending on the traffic you want to hide.

HTTP proxies are meant exclusively for internet traffic. You enter the IP address of the proxy you want to connect to in your browser’s settings and traffic will be routed through that server. Other traffic, such as peer-to-peer connections, isn’t suitable for an HTTP proxy.

There isn’t any encryption, either — not even basic SSL/TLS. You can learn the difference between those in our SSL vs TLS guide.

That means you’ll have to make sure that the websites you connect to support TLS, especially if you’re inputting sensitive information. That applies to email, too. You can learn more about enabling encryption for your emails in our guide to email security.

SOCKS proxies are better than HTTP proxy servers in that they’re traffic agnostic. You can send any traffic through a SOCKS proxy, whether it is basic web traffic, a P2P connection or an FTP connection.

Apart from that, SOCKS proxies have the same issues as HTTP proxies. There’s no encryption outside what you supply and the traffic load and speed are up in the air. Plus, SOCKS proxy servers have more overhead, so they are usually slower than HTTP.

Free proxies are bad for security, but what about paid ones? You’d think that maybe shelling out a few dollars for a paid proxy might give you better security, but that’s not really the case.

The fact of the matter is that paid proxy servers aren’t meant for individuals. Instead, they help companies scrape data from websites. Most corporations blocklist IP addresses coming from other businesses, so those businesses have to use proxy servers if they want to obtain that data. That’s the true purpose of a paid proxy, and it’s no more secure than a free proxy server.

Cybersecurity novices will often reach for a free proxy online as a way to protect themselves while downloading a few movies or albums. Free proxies come with many drawbacks, including lack of encryption, inconsistent uptime, slow speeds and in some cases exposure to malware. It’s also difficult to pin down who’s running a free proxy server and their integrity as it pertains to cybersecurity.

What Is a VPN (Virtual Private Network)?

For this article, we’re going to provide a general overview and how VPNs compare to proxy servers and Tor. You can read our guide on what a VPN is and VPN security guide if you want the nitty-gritty details on how the services work.

What Does a VPN Server Do?

At first glance, a VPN looks pretty similar to a proxy server. Your signal travels to a VPN server, then from there to the website you’re trying to visit. However, this time, your signal gets encrypted by the VPN software before it ever leaves your device. This means that anyone snooping on you will only see jumbled signals that don’t make sense. Yes, that includes your ISP.

VPN providers are far more secure because they use advanced encryption ciphers like AES-256 and ChaCha20 to encrypt your connection and anonymize your traffic.

As long as you’re using a service that doesn’t leak — read our VyprVPN review for an example — you’ll be incognito online. Route tracing becomes practically impossible and your initial connection disappears into the ether.

First let’s address the elephant in the room: VPNs are paid services. We’ll talk about free VPN services in a bit, but for now, suffice it to say that if you need a VPN, you should use a paid one. The extra cost comes with extra security, reliability and features.

For example, VPNs can bypass the harshest geoblocks and let you access restricted content across the globe. The best streaming VPNs will help you unblock Netflix, Hulu, Amazon Prime Video and most other streaming platforms.

VPNs are also the only real solution for secure P2P connections, as you can see in our best VPN for torrenting guide. VPN services provide the best balance of security and speed for P2P connections — something proxy servers and Tor struggle with.

VPN services aren’t without their drawbacks, though. While they’re meant to protect your privacy, a VPN provider can see your web traffic and, in some cases, log it. Providers such as IPVanish have been caught red-handed logging user data and handing it to the government. You can read more about that incident in our IPVanish review.

That said, ExpressVPN and NordVPN are examples of providers with a commitment to security and privacy (read our ExpressVPN review and NordVPN review). It’s important to do your research and see if the service you want to use has anything shady in its past.

Should You Use a Free VPN?

The biggest downside is that a good VPN, in almost every case, will cost money. There are free options, but as you can see in our worst free VPNs guide, they come with unintended consequences.

There are rare exceptions to this, like Windscribe, ProtonVPN and TunnelBear. In our opinion, Windscribe is the best free VPN around, as you can read in our Windscribe review.

However, if you’re on a budget, you can get a VPN for cheap. Providers such as CyberGhost and Private Internet Access offer unlimited plans for multiple devices for only a few dollars per month. You can learn the specifics in our CyberGhost review and PIA review.

Tor is a free-to-use network of access points called nodes that work like proxies for your connection. It’s also the name of the browser you use to connect to this network. When you use the Tor browser, your connection gets routed through several of these nodes before arriving at its end destination. Traffic on the network is encrypted as well, so it’s marginally safer than a proxy.

However, like any free service, it comes with drawbacks. Like proxy servers, Tor exit nodes (the last server your connection bounces off of) are recognizable. Because of that, websites can blocklist those IP addresses and your connection.

Additionally, Tor nodes are run by volunteers who can see your traffic and potentially alter it. Many nodes are malicious and add malicious data to the packets you’re sending or receiving. They can also redirect your traffic to a copycat website and steal your login information.

As for privacy, not everything is sound there, either. VPN providers, such as VyprVPN (read our VyprVPN review), have consistently asserted that Tor is a subpar solution for true anonymity, and for good reason. Massachusetts Institute of Technology researchers, for example, have been able to break Tor without cracking the encryption it uses.

The basic premise is that someone who’s snooping on a Tor connection can use traffic fingerprinting to determine what content a user is accessing. The data can be monitored and the packets counted to determine where the connection is coming from and where it’s going.

Plus, Tor is under constant scrutiny by government agencies because it’s often used for cybercrime. As you can read about in our guide to the deep web, Tor is used by criminals to connect to dark web websites in an attempt to mask their identities. Cybersecurity is made to be broken and the focus on Tor makes it all the more risky to use.

It has other usability concerns, too. Tor doesn’t work for P2P connections and is much slower than a proxy or VPN. You’re still encrypting your initial connection, but also having to bounce that connection off several servers before reaching your destination.

Which Is More Secure: VPN or Proxy or Tor?

The only way to truly protect your web traffic is with a VPN. Proxy servers are convenience- and speed-focused solutions that are suitable for bypassing basic geoblocks, and Tor focuses on brute-forcing anonymity at the cost of massive amounts of speed.

On the other hand, VPN connections provide near-unprotected speeds while keeping your traffic completely secure. Really, the only drawback is that you have to pay for a VPN. There’s really no contest between Tor, a VPN and proxy server — the VPN always wins.

For most people, a VPN is the best choice, but that shouldn’t come as much of a surprise. A VPN connection is encrypted, secure and fast. Proxy servers and Tor don’t have that kind of reliability, so your security is left to speculation.

That doesn’t mean they don’t have value, though. Connecting to a VPN through Tor is a slow but effective solution for true anonymity (see our best VPN for Tor) , and proxies are a fast and low-cost solution for basic IP masking. As an all-around solution, though, VPNs are best.

Do you agree that VPNs are the best option, or do you prefer to use something else? Let us know your thoughts in the comments below and, as always, thanks for reading.