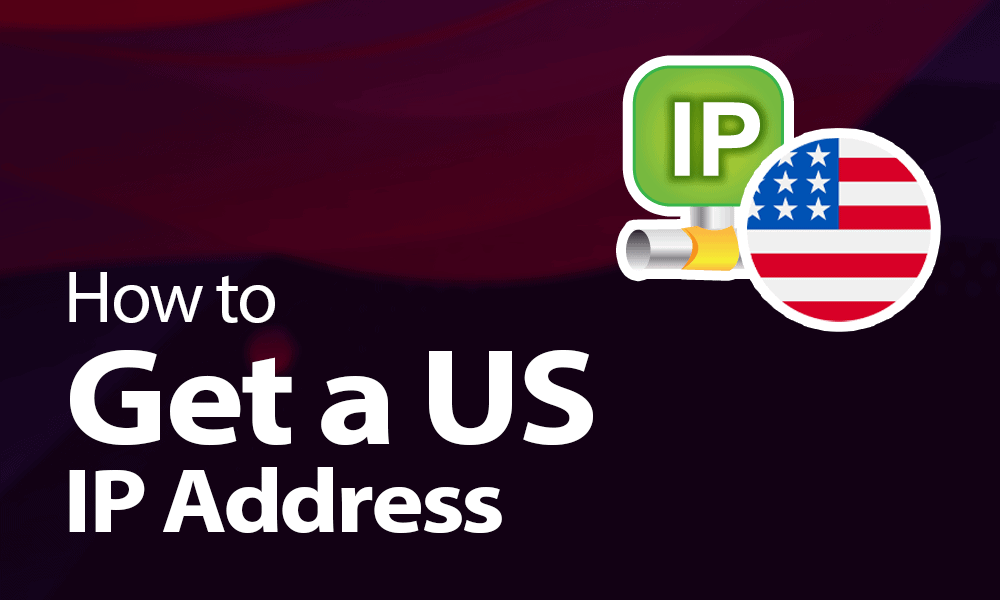 There’s a huge number of reasons why someone would want a U.S. IP address. Maybe you want to watch U.S.-exclusive content on American Netflix, Amazon Prime Video, Hulu or HBO Max. Or maybe you’re looking to access websites that aren’t available outside the U.S. Regardless of the reasons, you need to know how to get a U.S. IP address, and this guide will show you how.

The solution you want is a VPN provider. While a proxy server might seem like a good idea at first, they’re actually not secure, and most of them won’t work with streaming services. To add to this, tracing your real IP address is a piece of cake if you’re only using a proxy. However, using a great VPN like ExpressVPN is easy and secure.

Step by Step: How to Get a US IP Address

The best and most secure way to get an American IP address is to use a VPN, or virtual private network. Not only does it make websites think that you’re in the U.S., but it will also add a layer of security to everything you do, keeping your internet traffic away from the prying eyes of your internet service provider.

To show you how simple it is to use, here’s an example using ExpressVPN (other VPN services are very similar).

The 3 Best VPN Options to Get a US IP Address

When you’re looking at how to get a U.S. IP address, most of the VPN options out there will offer servers in various locations around the U.S. To make the most of it, you should find a VPN that has great speeds, is reliable in terms of online security and privacy, and can unblock Netflix and other popular streaming sites. Here are three VPN suggestions that do all of the aforementioned very well.

When it comes to speed, ExpressVPN takes the win for the fastest VPN out there. Plus, if you need an American IP address, it offers a very extensive list of server locations, with multiple data centers in the larger cities. It works very well with streaming services, too, and has unlimited data. You can find out more about it in our ExpressVPN review.

Its pricing is more expensive than other VPNs, but subscribing for a year will make it a bit better (and get you three free months). The reliable 30-day money-back guarantee is there in case you change your mind.

All things considered, if you want the fastest, most reliable way to get U.S. IP addresses, ExpressVPN is the VPN to go for. It takes the first spot, thanks to a combination of speed, features and U.S. servers.

NordVPN’s strong suit is security, thanks to its NordLynx protocol that provides users with a double network address translation (NAT). NordVPN also has servers in multiple locations in the U.S., which makes it perfect for getting  an American IP address. The included ad blocker is a neat addition, too, and you get solid speeds and unlimited bandwidth — perfect for streaming.

When it comes to the pricing, you’ll want to go for the two-year plan for the best value. There is a 30-day money-back guarantee in case you change your mind, as well.

The robust feature set and focus on security make NordVPN a great way to get U.S. IP addresses, and the long-term commitment is worth it. If you want to find out more, check out our NordVPN review.

If you aren’t looking to spend any money at all, and don’t mind limited data, Windscribe is the best way to get a U.S. IP address for free. There is a generous data cap at 15GB per month if you confirm your email address and tweet about the service, and you get multiple locations in the U.S., even on the free plan. We go into more detail in our Windscribe review.

Windscribe is a free VPN, but there is also a Pro plan with a reasonable price. Or, you could build your own plan by adding servers of your choice for a $1 charge per location per month. Your data will be limited to 10GB per location each month, but you could add on unlimited data for an extra $1 per month.

Overall, even though it does have some limitations, Windscribe is the best free VPN for people who need access to a U.S. IP address, bar none.

Even though the three VPN providers above are the best for an American IP address, there is no shortage of VPNs that offer U.S. IP addresses, and there are some other VPNs that offer quite a bit of functionality but didn’t quite make the top three.

CyberGhost is a great example, but as seen in our CyberGhost review it fails to access streaming services like Hulu and Amazon Prime Video, which is why it didn’t make the cut.

Surfshark is another VPN that we like a lot, as you can tell in our Surfshark review, but the middling streaming speeds is why it’s not in our top three. Then there’s Private Internet Access, which, as you can read in our PIA review, has inconsistent speeds and doesn’t perform too well when it comes to streaming.

All the honorable mentions are part of our list of best VPNs, but when it comes to a U.S. IP address, there are better options (including free VPNs), for the reasons mentioned above.

How Can I Get a US IP Address Without a VPN?

An alternative to VPN software that you might be tempted to use is a proxy server. There are both free and paid proxy servers, but none of them are a good idea. They get you a U.S. IP, but that’s it. No kill switch, no split tunneling and don’t even get us started on things like encryption and DNS leak protection. Plus, they lack a no-logs policy, too.

If you use a proxy, any third party that can access your data stream — such as your internet service provider (ISP) — can see everything you’re doing, despite the fact that you’re using proxy servers. This also includes the streaming services you access and the websites you visit.

There’s also the fact that it’s incredibly easy for any basic tracing service to find your IP address, which is just bad for security reasons. Don’t experiment with proxy servers — instead, play it safe and go for a VPN. Even some free VPN services come with great DNS servers, a strict no-logs policy, the ability to access streaming sites and to get a U.S. IP.

Why Get an American IP Address?

Having United States IP addresses can bring lots of benefits. For Americans abroad, connecting to a U.S. IP address means you’re able to access your local content and services, such as your online U.S. bank account, as usual.

For many non-U.S. citizens, though, it’s like opening the wardrobe doors to Narnia. There’s a ton of content and services that are only available to the United States audience.

Take Netflix as an example. Although it’s available in over 190 countries, Netflix U.S. has plenty of unique content, with a lot of shows being unavailable in other countries. Plus, the streaming service Hulu is only available in the U.S. (check out our best VPN for Hulu piece).

If you’re a gamer, connecting to an American server could mean you’re one of the first to get access to a downloadable game. It could also grant you access to games that aren’t available outside of the good ol’ USA.

You might also want to keep up with live sports events on ESPN, such as Major League Baseball (MLB), the National Football League (NFL) or the National Basketball Association (NBA). If you’re outside the U.S., you’ll need the best VPN for ESPN.

The Dangers of Using a USA IP Address

Now that we’ve mentioned the benefits of getting a U.S. IP address, we should also point out any vulnerabilities, too.

The U.S. is known for its intrusive surveillance measures, and it’s fair to say that as soon as you’re hooked up to a U.S. line, that IP address is being monitored and your sensitive information is at risk. You probably won’t even realize that it’s happening, but that’s why it’s so important to have a VPN as your virtual bodyguard.

With that in mind, it’s also a good idea to check where the VPN service is based. If you choose a VPN that is based in the U.S., it will fall under U.S. jurisdiction. Because the country is part of the Five Eyes alliance and has other eyeballs looking at you — such as the NSA — there’s the worry of the VPN not being totally private.

For complete peace of mind, it’s best to choose a VPN service that’s based outside the U.S. Our three recommendations are based in the British Virgin Islands, Panama and Canada, respectively, which are all countries with the best cloud privacy laws.

Final Thoughts: How to Get a US IP Address

When everything is said and done, the answer to how to get a U.S. IP address is actually very simple — just opt for one of the VPNs we suggested above. Each provider will virtually move you to the U.S. within a few seconds, and you can’t go wrong with any of them.

Will you go for ExpressVPN’s incredible speeds and unlimited data, or do you prefer the added security of NordVPN? Or is it maybe Windscribe’s free plan that has your heart? Are there other free VPN services you prefer? Let us know in the comments, and thank you for reading.