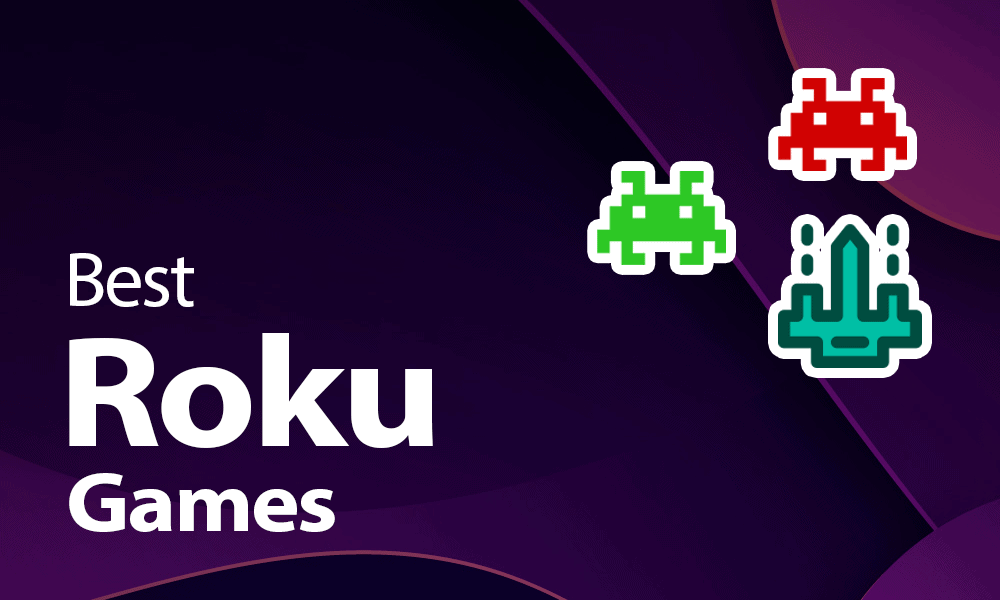 Roku is among the top streaming players on today’s market, especially for cord-cutters because of the number of free Roku channels available. Still, streaming TV shows and movies are not the only thing you can do on Roku. You can also play Roku games. Sure, they’re not up to PlayStation or Xbox standards, but they’re similar to mobile games and great time-killers.

We’ve listed 15 of the best Roku games. That includes paid and freemium games, as well as completely free Roku games, in case you’d prefer to keep your Roku costs down.

To find them, all you need to do is go to the “games” category in the Roku Channel Store menu either on your Roku streaming device or the Roku website. You can add a game to Roku in the same way that you add channels to Roku.

Enjoy some classic arcade gaming on the TV screen with PAC-MAN Championship Edition. This sequel — created by the original developer, Bandai Namco — brings better graphics and a whole bunch of new features, too, such as larger mazes, chompin’ combos and more. It costs $4.99, but if you’re a PAC-MAN fan, it’ll be the best $4.99 you’ll spend.

Air Hockey is a great in-person game, but you can also have fun on-screen. Play against the computer or four players and enjoy smooth animation as you hit the puck into the goal. There are two versions of this game available: ad-supported or ad-free. If you don’t mind some ads here and there, then you can play Air Hockey totally free. If not, the ad-free version costs $0.99 per month.

Galaga is another classic arcade game developed by Bandai Namco. If you like Space Invaders, you’re sure to like Galaga, where you can control your spaceship and take down each wave of invaders.

Each wave brings a new formation and speed, so you’re going to need to shoot and maneuver your spaceship like your life depends on it — well, three lives. There are 250 levels, too, and each level you pass gives you the power-ups needed to succeed. Galaga costs $4.99, but you’ll get your money’s worth from the addiction.

Fancy a bit of a twist to traditional bowling? Then Downhill Bowling 2 should be right up your alley — no pun intended. Instead of bowling down a conventional lane, you’ll come across different terrain, ramps, slopes, obstacles and more. Collect coins and power-ups as you go while earning as many points as possible. The game costs $1.99, but you get fast-paced entertainment all the way.

Who can turn down a good ol’ game of Snake? The apple-munching game became a favorite on cell phones such as Nokia, and now, Roku has brought this piece of nostalgia to the TV screen. Snake is free, but it may require additional fees.

Super Stickman Golf isn’t like ordinary golf. Rather than just swing and hope for the best, you need to apply some physics to this puzzle game. You take on 32 courses needing different angles to get the perfect shot. You can collect special abilities and power-ups, as well as earn achievements along the way. Originally released on iOS and Android, the Roku version costs $1.99.

If you like time-management games, then you should love the iPhone original game, Anna Montana. The game takes you through a complete story in which you help to send Anna to school by doing housekeeping chores, such as vacuuming, laundry and organizing, for the residents of Glamour Lane. There’s a free demo available, and the full game costs $1.99.

Tiles is an action-puzzle game that never ends. You can play levels created by other players and create and share levels for others to play, too. Tiles is the perfect game for puzzle-lovers to get their brain cogs going. It’s also free, though additional fees may be required.

Retaliate is similar to Galaga and Space Invaders in that it’s a scrolling shooter game, but the difference is that your space hero isn’t armed with infinite ammo. Instead, you have to absorb your enemies’ ammo and shoot it back at them. It’s a free game, but additional fees may be required.

If you fancy your luck at some poker, then Video Poker has five varieties to play. Choose from Jacks or Better, Double Double Bonus Poker, Deuces Wild Poker, Joker Poker or Double Joker Poker. You can also choose from two modes: normal mode for a Las Vegas casino experience or tournament mode for a more competitive game. Video Poker is free but may require additional fees.

Some of the simplest games offer the best entertainment when you’re bored, and what could be simpler than Tic-Tac-Toe? You can play three-in-a-row or five-in-a-row, and you can play with a friend or against the computer. It’s a free game, but there may be additional fees required.

Whether you’re a chess master or just dabble in the odd game here and there, Chess Live could become a favorite go-to on Roku. Not only can you play against the computer, but there’s also the option for a two-player game or to play online with friends, family and other Roku users.

You can choose your level of play, schedule games and even have a quick game of Solitaire, MineSweeper or Sudoku while you’re waiting for players to come online. It’s free but may require additional fees.

If you’ve ever played Bubble Shooter, you’ll know how addictive it can be. If not, it won’t take long to understand. You simply aim and shoot to match three or more of the same color bubbles and pop them. Clear the board to earn the highest score, but be sure not to let the bubbles reach the bottom, or you’ll lose. It’s totally free and lots of fun.

Fill boring, gray levels with as much color as possible as you bounce your way through. The more color you fill, the higher your score. Rainbow Dash is simple but addictive. It’s also free but may require additional fees.

Move your way through different obstacles to collect as much candy as possible. Dodge bunnies, clamber over bricks, float on moving platforms and more. There are lots of levels to get through, and each level is a little harder than the last.

Although Roku isn’t a dedicated gaming device, there are lots of Roku games available, from puzzler games to traditional board games to classic arcade games and more.

Many games are completely free, but some are paid or include paid add-ons. If children are likely to install games, it’s a good idea to set up a PIN on your Roku payment method, so they don’t make any purchases without your consent.

If you liked this article, you might find some of our other Roku articles helpful, including our Roku vs Firestick comparison, the best VPN for Roku guide and how to use Roku with Google Play.

What’s your favorite Roku game? Do you agree with our list of the best Roku games? Is Roku gameplay good? Let us know in the comments below and read our Roku scams piece to ensure you stay safe. As always, thank you for reading.