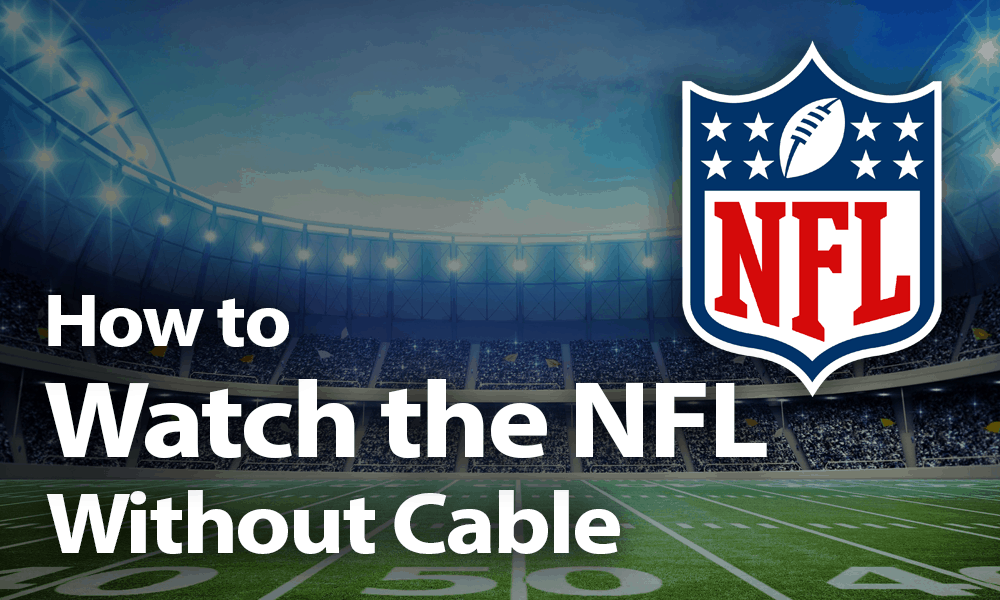 American football fans need those couple of hours of thrill during the NFL seasons. After a hard day at work, watching the Tampa Bay Buccaneers face off against the New England Patriots is just what you need to kick back. If you’ve given up cable and are a dedicated cord-cutter now, you’ve still got plenty of alternatives to watch the NFL, and this guide will show you how to watch NFL games online.

If you’re not in the U.S. though, a lot of these services may not be accessible to you. We’ve got a solution that will help you access all platforms. We’ll give you all the dirt on ways to stream all things NFL, from regular season games to out-of-market games.

How to Watch NFL Games Online Without Cable

You can live stream NFL games on NFL.com. The website is accessible worldwide, but it’s not free, and it’s subject to regional blackouts. However, you can always use a VPN to bypass the geoblocks.

Big-time football fans may want to consider buying an NFL Game Pass that costs $99.99 a year and offers the entire current NFL season. NFL Game Pass also has a seven-day free trial if you want to see if it’s worth the money. If you want to watch local TV market games or primetime games on your mobile phone, the Yahoo Sports app is a great free alternative.

If you don’t mind splurging a little, you can stream live NFL games on the DirecTV Fantasy Zone channel, but DirecTV costs $69.99 a month. You can also watch NFL games live on streaming services like fuboTV, YouTube TV and Hulu+ Live TV, all of which cost $64.99 a month. You can also watch the NFL on Sling TV’s Orange and Blue plans, which cost $35 each or $50 for a combo purchase.

If you’re on a tight budget but want to watch games on one of the live TV streaming services, your most pocket-friendly options are Paramount+ Premium, Amazon Prime Video and Peacock Premium. If you’re not in the U.S., however, you won’t have access to a lot of these services. You can still use a VPN to get access to these services, of course.

fuboTV offers channels like ESPN, NBC, Fox and CBS where you can stream games and watch the Super Bowl, but it lacks the NFL Network. However, fuboTV does offer a package inclusive of NFL RedZone where you can stream Sunday afternoon NFL games 1 p.m. through 8 p.m. (Eastern Time).

YouTube TV has the most extensive range of RSNs. All four major networks (ESPN, CBS, Fox and NBC) are available, so you can stream local market games. The package includes NFL RedZone, and you also get access to NFL Network so you can stream exclusive games.

Hulu+ Live TV subscribers have access to ESPN, NBC, Fox and CBS to watch both local market and national games. Starting July 2021, Hulu added NFL Network to its live TV channels, so it’s similar to YouTube TV in terms of pricing and channels for football fans.

Sling TV has all but one channel: CBS. If you don’t mind passing on the local market games, Sling TV should be good. However, to get access to all remaining channels (Fox, ESPN, NBC and NFL Network), you need to buy both Orange and Blue plans.

AT&T TV offers ESPN, NBC, Fox and CBS so you’ll have access to almost all local and nationally televised games. However, it doesn’t have the NFL Network, so you may have to miss a few Thursday night football games.

If you’re in the U.S. and don’t want to cast your mobile phone’s screen onto a bigger one, Yahoo! Sports is a great free way to watch all local and prime-time games. Just download the app, allow your location and click on the “watch” tab.

Peacock Premium subscribers can view all Sunday night football games and any other NFL game that’s broadcasted on NBC. Peacock also recently announced the Sunday Night Football Final, an exclusive post-game show available for Peacock subscribers throughout the 2021 season, so that’s an additional goodie you get with Peacock.

Watch NFL Games on Paramount Plus

NFL games that air on CBS will be available on Paramount Plus, but they are regionalized. CBS is key to watching the NFL on Paramount+; that’s where you’ll see all the regional AFC games — depending on your region, of course. It’s not NFL Sunday Ticket, so you can’t watch any game you want, but it’s still something at $5 per month (check out our guide on how to watch Paramount Plus).

You can watch simulcasts of 11 Thursday night football games that are broadcast either on NBC or CBS on Amazon Prime Video. You won’t have access to any local channels or NFL Network, though.

Is There an NFL Live Stream Free Online?

You can stream NFL games free on the NFL app and Yahoo! Sports, provided you’re in the U.S. If you’re not, you’ll need a VPN to bypass the app’s geoblocks. For big-screen NFL streaming, consider signing up for a free trial with one of the services that offers one. The free trial, plus the 30-day money-back guarantee that many VPNs offer, means you can essentially watch the NFL for free.

How to Watch NFL Games for Free With a VPN

If you haven’t used a VPN before, we’ll walk you through three simple steps so you can enjoy watching your local NFL team play football.

How to Watch Thursday Night Football

You can watch Thursday night football on the NFL app or Yahoo! Sports app for free, but if you want to watch Thursday night games on a bigger screen, you need a streaming service that carries Fox or NFL Network. To watch football on a Thursday, you’ll need access to fuboTV, Hulu+ Live TV, Sling TV, YouTube TV or DirecTV (which also gives you access to out-of-market games, provided you subscribe to NFL Sunday Ticket).

How to Watch Monday Night Football

Monday night football will be broadcast on ESPN and you can watch all Monday night games for free on ESPN.com, the ESPN app or Yahoo! Sports app. Read our guides on how to watch ESPN anywhere without cable and how to bypass ESPN blackouts. You can also watch any Monday night football game on fuboTV, DirecTV Stream, Hulu Plus Live TV, Sling TV and YouTube TV.

How to Watch Sunday Night Football

Sunday night games are broadcast on NBC, but you can also watch a Sunday night football matchup on your phone with the NBC Sports or NFL App (if you have cable subscription), or Yahoo! Sports app for free. If you want to stream live games on a bigger screen, you will need one of the following live TV streaming services: fuboTV, DirecTV Stream, Hulu Plus Live TV, Sling TV or YouTube TV.

The only caveat is that if you’re not in the U.S., you may not have access to all streaming platforms. However, you can simply use a VPN to bypass the geoblocks. Do you know of other ways to stream the NFL online? Did you have to use a VPN to access the platform? Let us know in the comments below, and as always, thanks for reading!