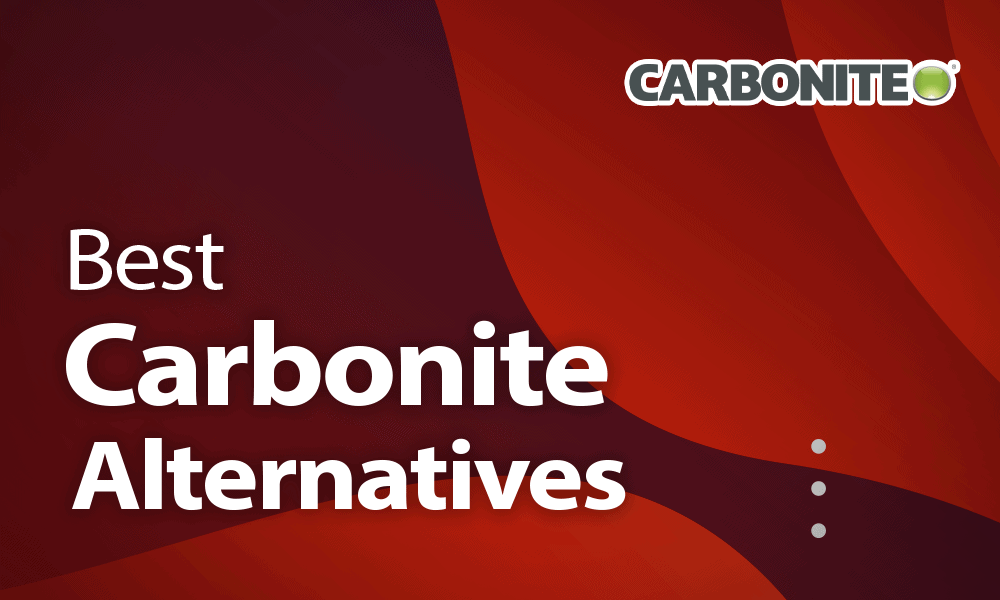 Carbonite is one of the most popular pieces of data backup and recovery software out there. This is probably because of its easy-to-use interface, great security and privacy, as well as its straightforward backup process.

However, Carbonite is not without its flaws, such as terrible download speeds, lack of features and complicated pricing scheme. Because of this, we’ve put together a list of the best Carbonite alternatives to help you find other options.

To expand a bit on Carbonite’s flaws, speed is by far the biggest issue. Although its upload speeds are decent, downloads from the backup cloud via its recovery software are almost painfully slow. Furthermore, Carbonite arbitrarily locks features — like automatic video backup and external drive support — behind more expensive plans, which doesn’t sit right with us.

Carbonite is also limited to Windows and Mac computers, so if you’re looking to backup mobile devices or computers running Linux, you’ll need to look elsewhere. Although we’ve chosen five alternatives to list here, there are several others you can consider, as well, so be sure to check out our list of the best online backup services for even more options.

Backblaze and Carbonite have a whole lot in common. They both focus on providing an easy-to-use backup service with unlimited storage without overwhelming users with a bunch of features.

Although they have similar price tags, Backblaze keeps it simple, compared to the Carbonite pricing structure, with just one subscription plan instead of multiple account types and tiers.

Backblaze also includes several features not found in Carbonite, such as file sharing, a “inherit backup state” feature  and even a function to locate your computer if it’s stolen or lost. It also tops our list of the best cloud backup for Mac, so Apple users will be well served by this alternative.

Where Backblaze falters in this comparison is security and privacy. Because of its flawed implementation of encryption — namely that you have to upload your encryption key to restore your data — your files can potentially be handed over to authorities if Backblaze were forced to do so. To learn more about how the two services compare, check out our Backblaze vs Carbonite battle.

IDrive represents the opposite of Carbonite in terms of design philosophy. Although both services are easy to use, IDrive is jam-packed with features, including things like share and sync functionality, mobile backup, multithreading and hard drive cloning. Be sure to read our IDrive vs Carbonite comparison for more details on how they stack up against each other.

The service also knocks it out of the park in terms of security and privacy, featuring strong private encryption and a clear privacy policy, as well as hardened data centers to protect against various forms of attacks by cybercriminals. Its customer support is also top notch.

If you don’t like the idea of paying for backup software per year or per month, then Acronis Cyber Protect Home Office is one of the best alternatives out there. Instead of a recurring subscription, you get unlimited online storage for a one-time fee, something that is very rare in the online backup space.

Much like the previous entry on this list, Acronis is chock-full of features, including device synchronization, a tool for creating a bootable rescue media device and the ability to create a hidden partition on your hard drive.

Acronis also performs excellently in terms of speed, and it offers great private encryption. There’s also a long list of data centers available, which is part of the reason for its good speeds. It also means that you aren’t forced to keep your data backup in a country with poor cloud privacy laws, such as the U.S., which is the case for most storage services, including Carbonite.

Zoolz is a great alternative to Carbonite if you enjoy the easy-to-use nature of the latter but want to get more information about your backup as it’s happening, as well as more control over the process.

Because Zoolz uses Amazon Web Services (AWS) servers, that means data center security is excellent. Another benefit of this is that users in certain countries (namely the U.K, Australia, New Zealand, Japan and all European countries) can avoid having their data stored in the U.S. because AWS maintains separate servers for these areas.

The biggest downside to using Zoolz is that it mainly offers cold storage, which means you have to wait some time to restore your data. It’s also somewhat lacking in features, including disk imaging and mobile backups. However, these features are also missing from Carbonite.

More importantly, Zoolz offers neither unlimited storage nor unlimited devices, whereas all the other options on this list provide one or the other.

One of Carbonite’s biggest weaknesses is the download speed of its recovery software, which is what makes SpiderOak ONE an excellent alternative. Because the backup software compresses your data when it’s on the cloud, its download speeds are lightning fast, making it the service of choice for those who want to be able to get their files as fast as possible.

SpiderOak ONE also includes some powerful sharing and syncing functionality, as well as unlimited versioning, which Carbonite limits to just 30 days. Although there’s no unlimited data storage, you can backup an unlimited number of devices.

Security and privacy are also excellent, though SpiderOak’s customer service leaves a bit to be desired due to a lack of chat or phone support.

Because Carbonite is not compatible with Linux, those who are using that operating system are forced to go elsewhere. SpiderOak ONE is easily the best of our listed alternatives to Carbonite for Linux users — coming in third on our list of the best online backup for Linux — as well as being a decent choice for both Windows and Mac.

That rounds out our list of alternatives to Carbonite. Although Carbonite backup is a pretty good service, its poor download speed, sparse list of features and complicated pricing structure can be deal breakers for many people.

Which alternative is right for you ultimately comes down to what aspect of online backup is the most important to you, but we think the five options listed here will cover most people’s needs. What did you think of our Carbonite alternatives? Let us know in the comments below. Thank you for reading.