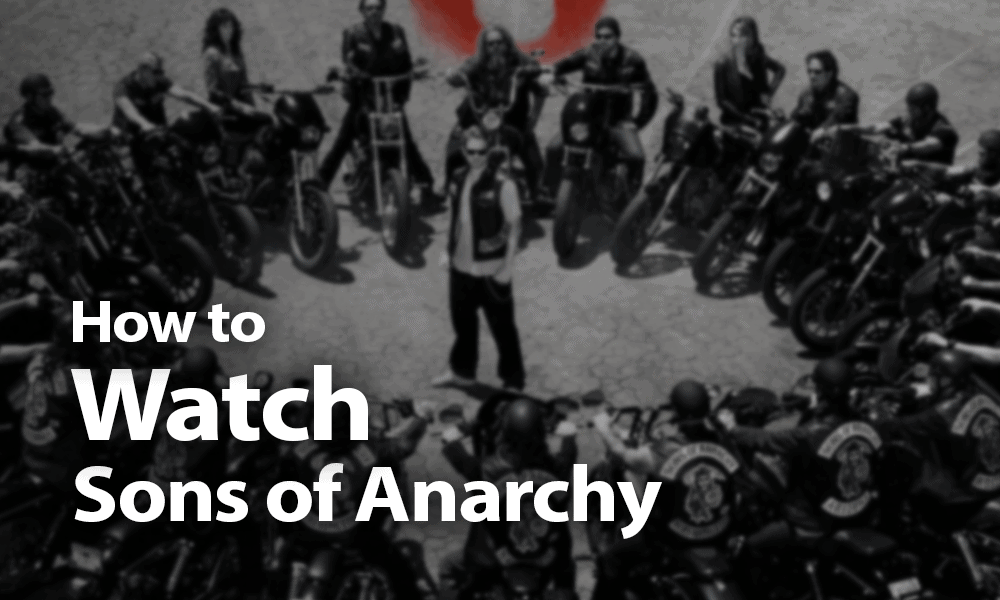 If you like antiheroes on big bikes, gruff beards and big guns, then Sons of Anarchy might be the show for you. The Sons of Anarchy Motorcycle Club, also known as SAMCRO, take up a prominent place in Charming, a fictional town in Northern California. Although the city motto of Charming is “our name says it all,” not so charming things are happening there. Check out what with our guide on how to watch Sons of Anarchy.

The Sons are running a garage and an illegal gun business while also promising the corrupt police to keep drug dealers and other criminals out of the city.

Given the fact that SAMCRO has practically joined forces with the local police, outside agencies — like the FBI and the Bureau of Alcohol, Tobacco, Firearms and Explosives — have started to look into the happenings in Charming.

Therefore, Clay, Jax and other members of the club must be especially careful, as they regularly cross legal lines. The main character of the show, Jax Teller — who got his place in the club through his father, John Teller — skillfully maneuvers between being an outlaw and family father.

Sons of Anarchy was produced and aired in 2008 by FX, a Walt Disney company. With a review of 89 percent on Rotten Tomatoes and 8.6 stars on IMDb, it’s one of the best-rated shows out there.

How to Watch Sons of Anarchy Online

If you want to watch Sons of Anarchy online, you’ve got plenty of options. Netflix, for example, currently has all seven seasons in its streaming portfolio. However, because Sons of Anarchy isn’t a Netflix original, it’s not available in every country.

Not only does Netflix protect itself from potential streaming rights violations by geoblocking all of its titles, it’s also extremely difficult to beat the Netflix VPN ban. That means, if you are using some kind of VPN service, Netflix will often know and you won’t be able to access its movies and shows.

We checked a few locations for you by hiding our IP address. Bad news for SAMCRO fans in the U.S. and Canada: Sons of Anarchy is not available on Netflix in either country. In Europe, however, things look different. We were able to enjoy Jax and his friends on Netflix in France, Germany, Turkey and many other countries all across Europe.

Fortunately, we have tested many VPNs that pass the Netflix ban. Check out our article on the best VPN for Netflix.

Another solid option for watching Sons of Anarchy online is Amazon Prime Video. Amazon Prime allows you to watch your favorite shows online, just like Netflix does. However, geoblocks are another thing those two companies have in common.

In the U.S., Canada, Norway and the UK, you are able to watch Sons of Anarchy on Amazon Prime Video, but you would need to buy all seven seasons for $19.99 each. If you have an Amazon Prime account, but you don’t want to spend $140 to watch how Clay Morrow is running his club, check out our best VPN for Amazon Prime Video picks.

In Germany, it’s a similar picture: The fifth season of SAMCRO is available, but you’ll have to buy all the other seasons. In France, the geoblock reaches so far that not even buying the titles is possible. Sons of Anarchy is, therefore, not available in France on Amazon Prime Video.

If you want to know how to use Amazon Prime Video and how to pass through its geoblocking mechanisms, check out our guide on how to watch Amazon Prime.

How to Watch Sons of Anarchy Online for Free

If you don’t feel like paying so much money for Amazon Prime Video or subscribing to Netflix in order to stream Sons of Anarchy, you can always try free streaming services.

Before you start using them, however, check if streaming is legal in the country you are living in. Most countries have laws that can cause you trouble if you try streaming movies or series on the internet. In any case, you should check our best VPN for streaming suggestions.

You can watch the Sons of Anarchy on SolarMovie, where we found all episodes of all seven seasons. Just be aware of the annoying pop-ups and dangerous viruses that linger on such sites.

To play it safe, use one of our best pop-up blockers suggestions on your browser and best antivirus software picks on your device for precaution, because it’s better to be safe than sorry.

There are also other free streaming services where we found Sons of Anarchy, like PutLocker, CouchTuner and 123Movies.

How to Watch Sons of Anarchy on Kodi

Kodi is another way to watch Sons of Anarchy for free. Although it has existed since 2004, Kodi only took off in the last couple of years. The multi-platform home theater application is available for download on almost all operating systems, such as Windows, iOS, Android or Linux. You can learn more about how to use Kodi in our Kodi guide).

Kodi itself is a legal way of orchestrating your favorite TV shows, movies, music or videos, but you should be careful when it comes to using Kodi add-ons. There are legal add-ons (that Kodi offers) and not so legal ones. You should treat the unofficial add-ons like torrents and use protection like a VPN (check our best VPN for Kodi guide).

If you don’t want the police knocking on your door (you can’t buy them like SAMCRO does), you might want to check if the add-ons are legal or not before you decide to download them.

We found all seven seasons of Sons of Anarchy in the Poseidon add-on. You can get this add-on by installing the Kodil repository.

One way of watching Sons of Anarchy is through torrents. You can download and watch it on your device. Most torrenting sites offer different file sizes and the quality of their videos differs, too. We found SAMCRO on different torrent sites, like Knaben or The Pirate Bay.

Using torrents is illegal, and we advise anyone with a few bucks in their pocket against it.

By downloading files from a torrenting site, you are risking a lot of things, including your security. Every file you download on your device has the potential to be malicious and to harm you and your device.

You should protect your device and your browser from all viruses and threats that comes with downloading through torrents (check out our suggestions for the best free antivirus software). If you want to know how you can safely sail these piratical waters, check out our best VPNs for torrenting. Remember: Being an outlaw is only cool with the right cut and a loud bike.

Crime, violence and tragedy are the daily grinds for the biker gang in Sons of Anarchy. The series is perfect for anyone who loves bikes, weapons and drama. Katey Sagal has won a Golden Globe for her performance as Jax’s mom for good reason.

The easiest way to stream the series is through a European Netflix account, where you’ll have full access to all episodes in most countries. If we couldn’t convince you to try out Sons of Anarchy, have a look at the Mad Men show or the sitcom Friends on HBO Max.