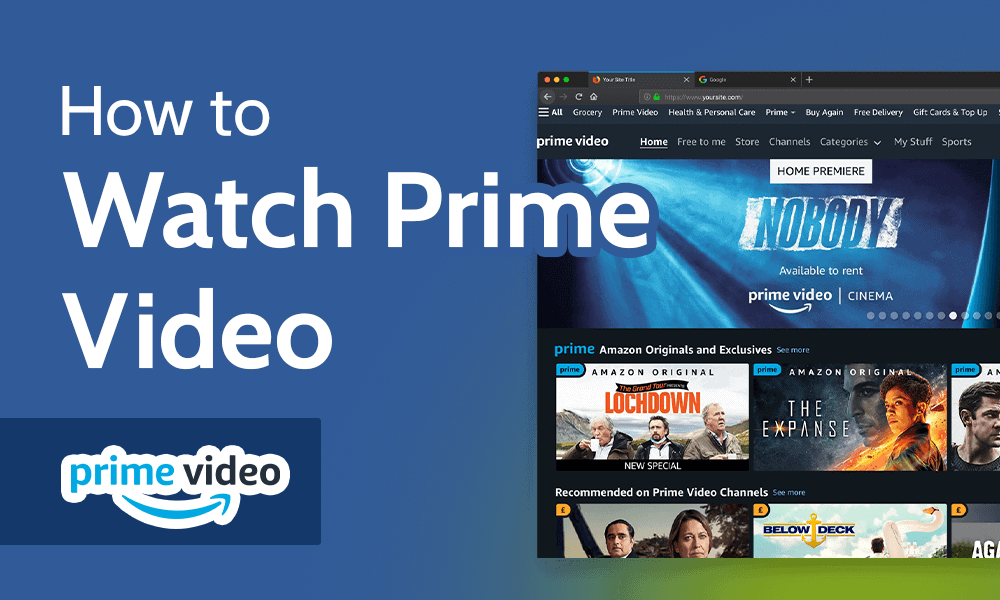 You can watch Amazon Prime Video on almost any device as long as you have an Amazon Prime membership. The app is available for smartphones, computers, TVs and gaming consoles. Once you install the app on your device, log in to your Amazon account and you’ll have access to your favorite shows and movies.

Don’t know how to watch Prime Video? We explain how below.

While the process is fairly simple, you may want some help if you’re setting up Amazon Prime Video for the first time. In this guide, we help you set up and watch Amazon Prime Video on TVs (smart and non-smart), smartphones and computers. We also explain how you can access almost any country’s content library on Amazon Prime Video using a virtual private network (VPN) service.

How to Watch Prime Video on TV: Smart & Non-Smart

Amazon Prime Video has an app for almost all popular devices. If you want to stream content on your smart TV, installing the Amazon Prime Video app is a simple solution. You’ll find an app in your app store on Android and Apple TVs.

So, what about non-smart TVs? You can still stream Amazon Prime Video content on a non-smart TV, provided you have a streaming device like Firestick. Using Firestick isn’t difficult, but the process is different from using the Amazon Prime app on a smart TV.

Below, we walk you through the process, so you can quickly start viewing your favorite Amazon originals.

Here is a three-step process to watch Amazon Prime Video on a non-smart TV with a Firestick:

How to Watch Amazon Prime Video on a Smartphone

Watching Prime Video content on a mobile device helps you stream your favorite movies and TV shows on a smaller screen. The process to set up Amazon Prime Video on Android and iOS devices is pretty much the same, except for downloading the app from the relevant app store.

Here is how you can get Amazon Prime Video access on a smartphone:

How to Connect Amazon Prime to TV From Mobile

If you have the Amazon Prime Video app installed on your Android or iOS device, you can cast the screen to your TV to enjoy content on a bigger screen. There are multiple ways to do this, such as with Chromecast or by using a Firestick.

How to Watch Prime Video on Laptop

Streaming on laptops is generally more comfortable than smartphones. If you’re home and in front of the laptop, you can either use the Prime Video app or the Amazon website to stream content.

You can download Prime Video titles for offline viewing using a Fire tablet or the Amazon Prime Video app for Windows, Mac, Android or iOS.

The process is pretty straightforward. Start by navigating to the title you want to view offline. The Windows and Android Prime Video apps have a direct option to save titles for offline viewing.

Is Amazon Prime Video Available in All Countries?

How to Watch Amazon Prime Video With a VPN

Using a VPN to watch Amazon Prime is fairly easy. You can get into any country’s content library simply by connecting to the appropriate VPN server.

For example, if you want to view Amazon Prime Video U.S., you connect to a U.S. server. The VPN assigns you a U.S.-based IP address. When you go to Amazon Prime Video, it will see you as physically located in the U.S. and provide access to the U.S. content library.

You might want to consider using ExpressVPN, given it’s our best VPN for streaming. However, you may also select a service from our list of the best VPNs to make sure you pick one of the best VPN services on the market. Below, we walk you through the process of using a VPN to watch Amazon Prime Video from anywhere.

ExpressVPN is the best VPN for watching Amazon Prime Video because it’s a streaming beast. It offers excellent connection speeds, bypasses geoblocks easily and has servers in over 94 countries — which means you can access Amazon Prime Video content for many countries.

You also get streaming-specific features like MediaStreamer. The feature improves connection speeds because it doesn’t encrypt your connection. It only assigns you a different country’s IP address, so you can access that country’s Amazon Prime Video content. Learn more about ExpressVPN in our ExpressVPN review.

ExpressVPN doesn’t come cheap. If you don’t mind the extra cost, ExpressVPN is your best bet for streaming content on Prime Video. You can also try it out risk-free before committing for the long term using its 30-day money-back guarantee.

NordVPN is almost as good as ExpressVPN when it comes to streaming. According to our speed tests, NordVPN is also the fastest VPN, which means you’ll never need to sit in front of a buffering video even if you’re streaming in 4K. Also, you can easily access almost any country’s content library on Amazon Prime Video using NordVPN — it has over 5,500 servers across 59 countries.

NordVPN uses the SmartPlay Technology that combines its security features with Smart DNS. The technology ensures that you always have access to the Amazon Prime Video content you want to watch without the platform detecting that you’re using a VPN. Learn more about the service in our comprehensive NordVPN review.

NordVPN costs almost half of ExpressVPN. Given its feature set and performance, NordVPN is a steal. However, you can still use the 30-day money-back guarantee if you’re not fully satisfied.

Windscribe is the best free VPN that can unblock Amazon Prime Video. Unlike most free VPNs, Windscribe is a reliable service that offers excellent speeds, top-notch security and has a strict no-logs policy.

The free plan offers 10GB of free data and access to servers in 10 countries once you confirm your email. The data cap might be insufficient if you stream a lot of content or stream in 4K; if you need more data, you can use Windscribe’s build-a-plan option.

The build-a-plan option has a minimum checkout value of $3 per month. With that $3, you can either buy three server locations for $1 per month each, or two server locations and unlimited data plus access to R.O.B.E.R.T. (Windscribe’s browser extension and ad-blocker).

We discuss R.O.B.E.R.T. and Windscribe in more detail in our Windscribe review. However, you can also just get a ready-to-use plan. You also have the option to try it using the three-day money-back guarantee.

Amazon Prime Video is one of the most popular streaming services, competing with the likes of Netflix and Hulu. You can access the service on almost any device, but if you’re in a country where Amazon Prime Video is unavailable, or if you want to access another country’s content, you’ll need a VPN.

A VPN will allow you to access geoblocked content and bypass censorship. It can help you access content regardless of your physical location on all major streaming services, including Amazon Prime Video and Netflix.

Have you used a VPN to stream Amazon Prime Video before? If yes, which one? Let us know in the comments below, and as always, thank you for reading.