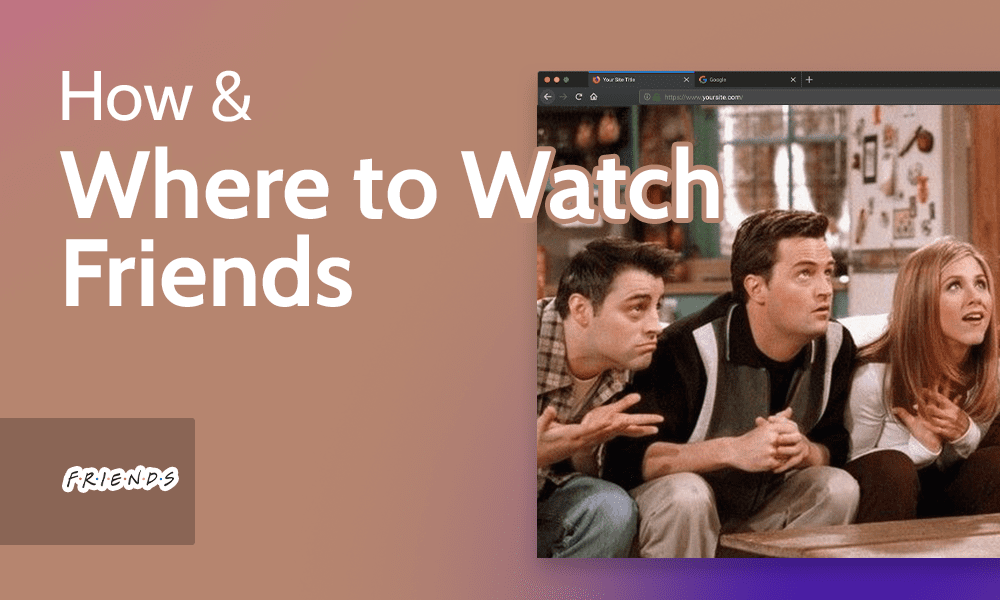 The hit sitcom Friends — produced by David Crane and Marta Kauffman — first aired on NBC in 1994 and ran 236 episodes over 10 seasons. If you have never seen the show before or just want to rewatch it for nostalgia, then keep reading as we’re going to show you where to watch Friends.

Some of the Friends episodes feel dated and have that ’90s vibe to them, but the show remains so popular today that networks and streaming services still allow you to stream it, including Netflix and HBO Max.

However, regional restrictions narrow your options to stream Friends, but we will show fans how to use a VPN to access all 10 seasons of these six friends — Rachel, Monica, Ross, Joey, Phoebe and Chandler — navigating life around the Central Perk and more.

Where to Watch Friends Episodes in the U.S. and Abroad

With 10 seasons of Friends to get through, there are enough episodes to have multiple binge-watching sessions. If you are in the U.S., then HBO Max has all 10 seasons of Friends available, but you should read our guide on how to watch HBO Max, as there are a few hoops to jump through if you plan to use a VPN, including needing an ad-free account.

You can also get access to Friends on Netflix U.K. and Netflix Australia. Netflix U.S. used to be an option, but it stopped streaming Friends in early 2022.

To get entry to these streaming platforms outside these represented countries, you will need to use a VPN. If you don’t know what a VPN does, then check our VPN guide.

How to Watch Friends With a VPN

By using a VPN, you can connect to a country that is showing content that you want to watch. The steps below show you how to watch Friends online with a VPN.

The Best VPN to Watch Friends Online in 2022

If you’re outside the U.S., U.K. or Australia, Friends fans will need a VPN with excellent speeds and unlimited bandwidth. It also needs to have the ability to get past geoblocks and VPN bans.

You can read our guide on the best VPN for streaming and pick the one that best suits your needs. However, our top recommendation is ExpressVPN, followed by NordVPN and Surfshark.

ExpressVPN is our top pick to watch Friends because it has everything you need from a VPN. Its lightning-fast speeds give you the best streaming experience and unlimited bandwidth so you don’t hit any limits. It’s also very easy to use, as well as secure.

ExpressVPN has a vast server network in the U.S. for HBO, as well as servers in the U.K. and Australia, meaning that it will be easier to get past the Netflix regional barrier.

ExpressVPN’s downside is the price. It’s more expensive than the other VPNs on the list, and it doesn’t come with extra features — like a malware and ad blocker — but these are not deal-breakers. You can read our ExpressVPN review, but if you want to try it out, ExpressVPN offers a 30-day money-back guarantee.

If ExpressVPN’s price is too much for your streaming needs, NordVPN is a great alternative. NordVPN has decent download speeds to match its security and privacy. Plus, its NordLynx protocol is optimized for fast streaming, making it a great choice to watch Friends. If you want to compare the two, take a look at our NordVPN vs ExpressVPN review.

NordVPN has plenty of servers worldwide, which helps you get past those pesky region blocks. For instance, the U.K. has over 440 servers in one location and Australia has over 190 servers in five locations, making it easy for you to switch servers if one is too slow to stream Netflix. Plus, there are almost 2,000 U.S. servers in case you decide to go with HBO Max.

NordVPN has a 30-day money-back guarantee, and our NordVPN review goes into even more detail.

Surfshark is a great VPN for the price. Although it’s a newcomer to the VPN game, it has a great collection of servers throughout the world, with Australia having 91 servers in five cities. For some reason, Surfshark doesn’t disclose how many servers are in the U.K. All we know is that it covers four cities. There are also more than 600 U.S. servers to get into HBO Max.

Don’t think because Surfshark is cheap that you get shortchanged — it doesn’t skimp on features. It uses CleanWeb, which fends off ads, trackers and malware and phishing attempts.

It has camouflage mode, which will mask your IP so it can’t be detected (read more in our Surfshark review). Surfshark’s standout feature is that there are no limitations — you have unlimited data and bandwidth, which is essential for streaming shows. It also comes with a 30-day money-back guarantee.

Now you are all set to start watching Friends, whether that’s from the very first episode where Rachel comes into Central Perk wearing a wedding dress or just watch one of your favorites and hear Joey ask, “How you doin’?”

Which streaming service will you use to enjoy Friends episodes? Are you a Friends fanatic or someone who has never watched the show before? Do you know of another way to stream Friends online? Did you use a VPN to stream Friends, and if so, which one? Let us know in the comments below and, as always, thanks for reading.