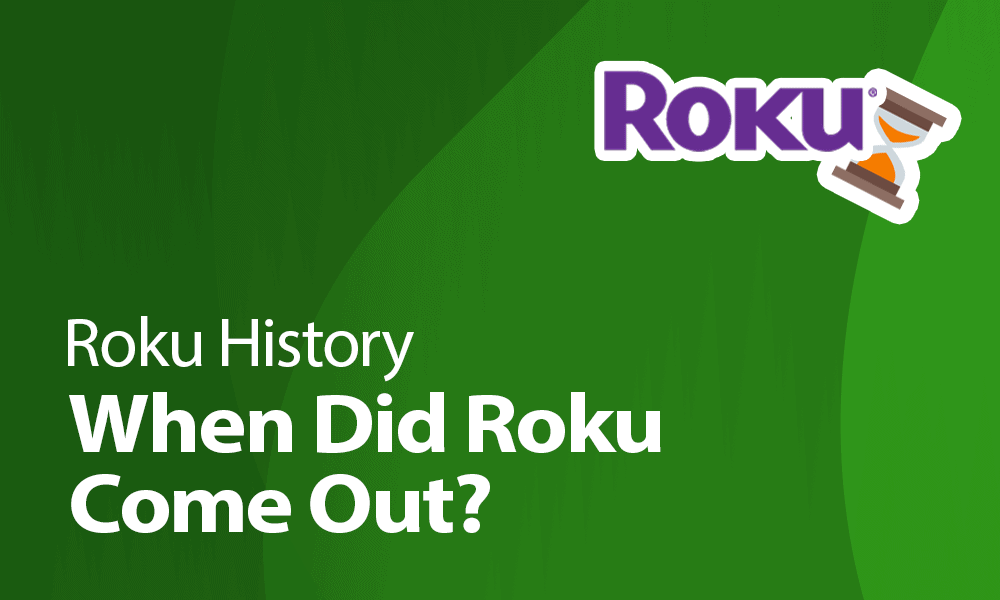 There’s lots of talk about Roku’s latest releases for October 2020 — the Roku Ultra and the Roku Streambar — and the 2019 Roku players are still popular, but you might be wondering: “When did Roku come out?” Well, the brand has been around for many years, starting way back in 2002 and now having more than 40 million users in the U.S. alone.

It’s interesting to see how Roku has evolved, both as a company and with its many streaming devices; it started out as a simple Netflix player, then was reborn as a stand-alone streaming device with thousands of channels at the ready.

You can read our Roku beginner’s guide to find out what Roku is and how it works, plus, we have a Roku setup guide and Roku troubleshooting guide in case you need help, as well as a guide on how to add channels to Roku.

In this article, though, we’ll provide an overview of Roku history. However, if you’d rather skip the foreplay and get to know a Roku in person, you can use our buyer’s guide to help you decide which Roku to buy.

The Start of Roku

To wind back to the beginning of Roku, we need to start with its founder, Anthony Wood. In the late 1990s, Wood invented the DVR (Digital Video Recorder) and set up the brand ReplayTV.

ReplayTV was successful but had high competition from TiVo, a company that also led its home networking device into the DVR world. Wood sold ReplayTV in 2001 after cable providers stopped fighting against the use of DVRs and instead decided to incorporate them into their own devices.

In 2002, Wood founded Roku, a company that designed media players, and in 2007, he became a vice president at Netflix. There, he worked alongside the Netflix team on the secret “Project “Griffin.” The team was building the Netflix Player, which subscribers would use to stream Netflix movies and shows from the internet straight to their TVs.

It would change the way viewers would obtain content. No more waiting for DVDs to arrive or scouring the shelves for movies to rent. The aim was to invent a convenient way for subscribers to access content digitally. In December 2007, the Netflix Player was almost ready for launch, but Netflix CEO Reed Hastings pulled the plug. It wasn’t without good reason, though.

Hastings realized that if Netflix produced its own hardware, it could make partnerships with other hardware manufacturers difficult because Netflix would be seen as a competitor. In a bid to keep Netflix at the top of the digital subscription game, the Netflix Player was handed over to Roku.

When Did Roku Come Out?

After Roku took “Project Griffin” into its own hands, it focused on creating a separately branded device that could stream TV with Netflix as its foundation, freeing Netflix as a service to pursue other devices to include its streaming app.

In May 2008, the original Netflix player was rebranded and released as the first device, the Roku DVP N1000. It was developed as the stand-alone device for streaming Netflix’s new “Watch Now” service, which let subscribers see what was new on Netflix and stream it. It supported standard and high-definition streaming up to 720p and came with a simple remote control.

While Netflix could pursue game consoles and other devices to include its service, the Roku device served as a more budget-friendly and smaller option for viewing Netflix.

In October 2009, Roku released two new models into its first-generation range: the Roku SD and the Roku HD-XR.

The SD became an entry-level option, supporting standard definition (SD) and replacing the HDMI port with analog AV outputs. The HD-XR became the top-of-the-line option, with 802.11n WiFi and a USB port. The Roku DVP was renamed as the Roku HD and became the middleman option.

In 2010, Roku released updated versions of its lineup. The newer versions were not only thinner, but they were also renamed and included better features. The newly shuffled lineup consisted of a Roku HD, a Roku XD with 1080p support and a Roku XDS that included dual-band WiFi, optical audio and a USB port. Both the XD and XDS included an updated remote, too.

In July 2011, Roku released its second-generation players, consisting of the Roku 2 HD, Roku 2 XD and Roku 2 XS. All of the new models included 802.11n, a micro SD slot and Bluetooth. Both the XD and XS supported 1080p. The XS had the addition of an Ethernet connector and USB port.

A Roku Game Remote was bundled with the XS, which added motion controller support for Roku games. It worked with the other models but was sold separately.

In October 2011, the company released the Roku LT, which was a lighter version of the current lineup, supporting up to 720p HD and taking away the Bluetooth capability and micro SD slot. The LT became Roku’s entry-level device that had a more budget-friendly price tag in the hope of reaching a new market.

In January 2012, Roku released its dongle-type player, the Streaming Stick. This small device opened a new door, providing a condensed version of the streaming player that used Mobile High-Definition Link (MHL). The MHL connection looks like a standard HDMI, but it provides device power, meaning there’s no need for an additional power source.

In October 2012, Roku added its search tool, which allows users to search for content by title, actor or director and sit back while the Roku searches through different services to find relevant content.

In 2013, Roku launched its third-generation players. In March, it released the Roku 3, which was much faster than its predecessors due to an upgraded CPU. It also had a WiFi Direct remote that included a headphone jack for private listening. The Roku 3 was joined by the Roku 2 and Roku 1 in September, as well as an updated version of the Roku LT.

In May 2013, Roku released its new tiled interface that it still uses today.

In January 2014, the company introduced the Roku TV, its own take on a Smart TV. TCL and Hisense were the first to partner up and manufacture a Roku TV, which was released later in 2014.

A newer model of the Streaming Stick was also released with a standard HDMI connection, allowing better compatibility with TV models that don’t support MHL.

In October 2015, the Roku 4 was released as an addition to the third-generation lineup. It had upgraded hardware and wireless, and also supported 4K streaming.

The Streaming Stick was kept as a sixth option, but not updated.

2017 — Streaming Stick+ and the Roku Channel

In October 2017, Roku launched a new Streaming Stick+, which came with an enhanced WiFi antenna. Plus, it updated existing players by giving a new processor to the original Streaming Stick, Express and Express+.

The Ultra was updated with better features, including 4K and 4K HDR, a remote finder and a new Voice remote with private listening. The company discontinued Premiere and Premiere+ devices.

On top of that, Roku launched its free, ad-supported Roku Channel, which would later include optional premium content, too.

In September 2018, Roku carried over the 2017 Express, Express+, Streaming Stick and Streaming Stick+ to its lineup, and added an updated Ultra, as well as a newer Premiere and Premiere+ with 4K support.

In September 2019, Roku updated its lineup to include the Express, Express+, Premiere, Streaming Stick+, Ultra LT and Ultra. These included a new, smaller form, as well as better performance.

On top of that, Roku also introduced the Smart Soundbar and Wireless Subwoofer, opening up a new line of Roku player technology.

In September 2020, Roku announced its upcoming lineup, including a new and improved Ultra and the all-new Streambar. The lineup still includes the 2019 Express, Express+, Premiere, Streaming Stick+, Ultra LT and the Smart Soundbar, as well as many Roku TV choices.

Both the new Ultra and Streambar were available for preorder in September 2020, but the expected shipping date was October 15. You can now buy either device from the official Roku Store, Amazon and other major retailers. On Amazon, they cost $69.00 and $129.00, respectively (see our Roku pricing guide for more information).

The 2020 Ultra is Roku’s most powerful streaming device yet. It offers the best performance in terms of device speed and wireless range, and also supports Dolby Vision and Dolby Atmos. It has Bluetooth capability and a lost remote finder, too.

The 2020 Ultra offers the best performance in terms of device speed and wireless range. It also supports Dolby Vision and Dolby Atmos, and it has Bluetooth capability and a lost remote finder. 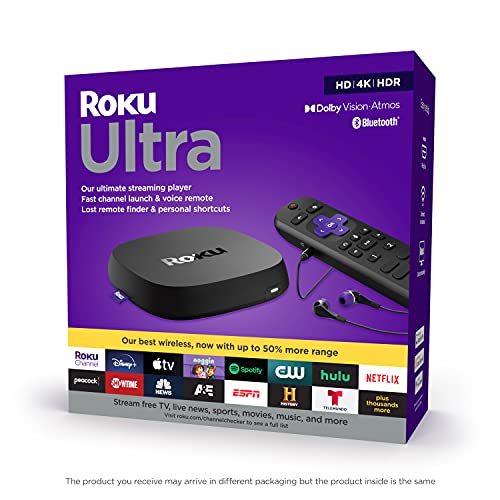 The Streambar is a more compact version of the Smart Soundbar with a couple of extras, such as the ability to add a USB Ethernet adapter. It’s also compatible with the Wireless Speakers and Wireless Subwoofer.

The Streambar is a more compact version of the Smart Soundbar and comes with USB Ethernet adapter capability. It’s also compatible with the Wireless Speakers and Wireless Subwoofer. 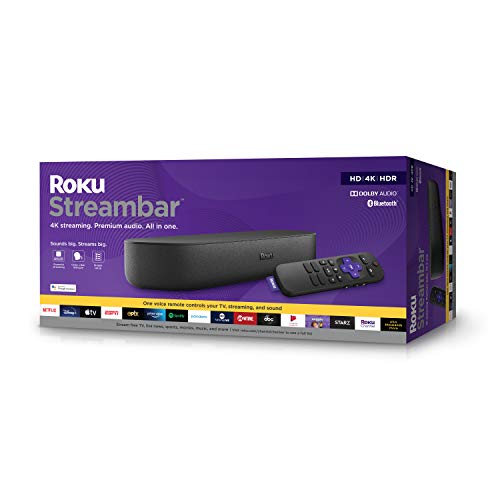 The Future of Roku

Roku has come a long way from starting out as a simple Netflix streaming box. There are Roku streaming devices for every use case, from the budget-friendly Express to the more portable Streaming Stick+, and from the powerful Ultra to Rokus built into soundbars and TVs.

Still, Roku, Inc. doesn’t seem to sit still when it comes to innovation. It makes the news almost every year when it releases updates or adds completely new devices, and with more people cutting the cord, there’s no reason for that to stop.

That’s not even mentioning the ever-changing content available on Roku. New channels, streaming services and content are added regularly, and the actual Roku OS is often updated, bringing extra customization options, features and more to your entertainment experience.

The Bose TV Speaker was released in October 2020, and it was the first soundbar with Roku TV Ready certification.

Although you might have only just been introduced to the world of Roku, there’s a good history behind its devices. From its inception as a Netflix streamer, Roku has become one of the best ways of accessing content and services, even for free — see our guide to the best free Roku channels and our guide on which VPN is best for Roku.

Roku has come a long way, and we’re excited to see what the future holds for the company and its technology.

Did you have the first Roku player? Do you have a more recent model? Tell us about your experience with using your Roku player in the comment section. As always, thank you for reading.

Sandra Pattison
Editor
Sandra Pattison is from the rolling hills of the United Kingdom where, when she’s not enjoying that one day of summer, she researches and writes on online security and censorship around the world. Writer by day, mother morning, noon and night, during her little free time she enjoys photography and likes to be spontaneous, but mostly ends up sipping tea with her pinky out.
Last published on Cloudwards:
Facts checked
by Andrea Babic
Because the Cloudwards.net team is committed to delivering accurate content, we implemented an additional fact-checking step to our editorial process. Each article that we fact check is analyzed for inaccuracies so that the published content is as accurate as possible.