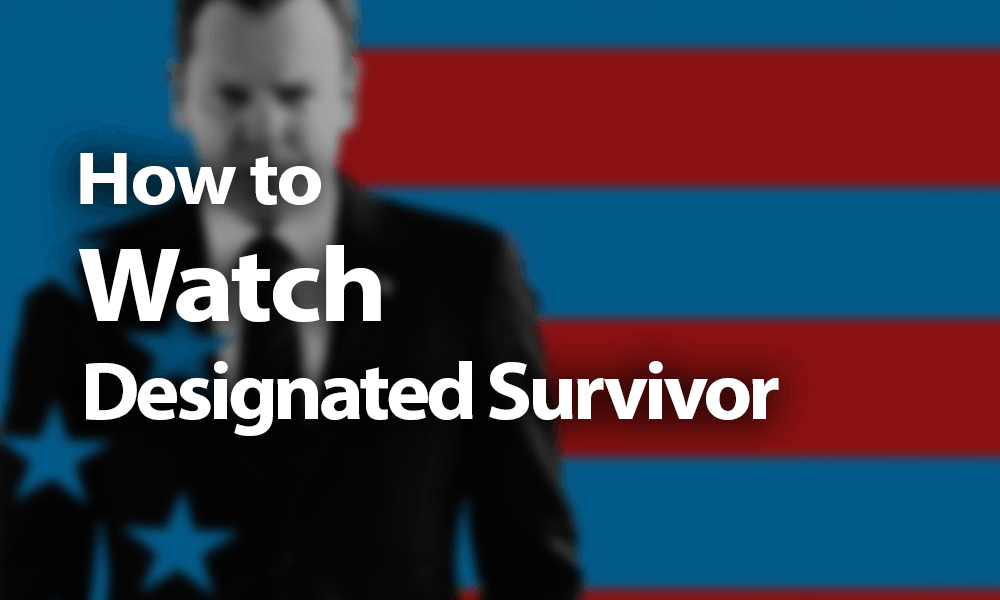 If you like tense political drama with a dash of spy thriller, Designated Survivor is for you. It follows the travails of Tom Kirkman, a lowly cabinet flunky who is propelled into the Oval Office after a terrorist attack wipes out everybody else in the U.S. presidential line of succession. It’s good, so we figured we should show you how to watch Designated Survivor online.

Kiefer Sutherland stars as Kirkman, the at-first hapless housing secretary who is so insignificant he has to sit out the State of the Union (not to be confused with the State of the Cloud) in a secure location. The role of designated survivor proves fateful, however, and when a bomb takes out the Capitol and everybody in it, Kirkman finds himself president of the United States.

Kirkman, who is supported by well-developed characters, quickly proves more than up to the task and soon grows into an efficient, principled, sympathetic and hard-working president. To avoid partisan madness, the writers opted to make Kirkman a registered independent, and in the show, he skillfully navigates the divide between Democrats and Republicans.

Besides the politicking, the other main plotline centers around finding out who blew up the Capitol and why. This is where the spy thriller elements come into play as a group of dedicated FBI agents risk their lives to track down the terrorists and uncover a conspiracy that’d even put The X-Files to shame.

If that sounds good to you, you’re in luck because Designated Survivor is easy to find online. Let’s see where you can stream it.

How to Watch Designated Survivor Online

Designated Survivor debuted on the American network ABC but moved to Netflix after two seasons. Netflix, in turn, added a third season, and all three are available on the platform in all countries with all kinds of subtitles and language options.

That makes Designated Survivor one of the rare shows where you won’t have to deal with the Netflix VPN ban or anything like it. Just go to the website, sign up and you can watch the show. If you’re new to the streaming service, though, check out our best Netflix hacks to make the most of your viewing experience.

How to Watch Designated Survivor for Free

That said, not everybody has the money to spend on Netflix or the willingness to jump from trial to trial using fake email addresses. For them, there are plenty of free streaming services, like Couchtuner and Putlocker. The latter has all three seasons of Designated Survivor online, and a quick check shows all episodes are working just fine.

We like Putlocker the most out of the many, many options you can choose from because it seems to dump the fewest ads on you and infects your computer with the least malware. Still, you should have one of the best pop-up blockers active while browsing, if only to keep from going nuts from the commercial bombardment.

Even with the pop-ups blocked, going to Couchtuner and Putlocker is like swimming in sewage. You’re going to pick up something nasty if you don’t protect yourself. To do that, have a gander at our selection of the best antivirus software and make sure nothing creeps onto your hard drive that shouldn’t be there.

How to Watch Designated Survivor on Kodi

Your last streaming option is Kodi, the open-source media platform that was developed for Xbox but is now available on almost every operating system and device you can think of. It’s cool, but getting it to work can be a cross to bear, so check out our Kodi guide for a painless experience.

As with most shows we’ve covered, the Poseidon add-on of the Kodil repo has all three seasons of Designated Survivor, so we recommend starting your search there. Kodil is one of the best Kodi repositories, so you’ll want to check it out, anyway.

That said, because using Kodi isn’t legal, technically at least, we recommend using one of the best VPNs for Kodi with it, even if just for peace of mind. Having the copyright goons come after you is no fun, which is a risk using Kodi shares with our next and final option for watching Designated Survivor.

Finally, there’s the torrenting option. Though not as convenient as streaming, there are serious advantages to having your favorite shows on your hard drive instead of floating about in the cloud. They’ll load faster, and if you’re internet connection fails, you won’t have to leave your perch on your sofa to read a book or something.

That said, torrenting is really illegal. Unlike with illegal streaming or Kodi, the chance you’ll be caught hovers near the 100 percent mark. We can’t emphasize enough that torrenting without a virtual private network engaged is just begging for a DMCA notice, or its local equivalent, to drop on your doormat.

Check out our best VPN for torrenting article to prevent that. If you want to prevent even more reading, NordVPN is our top pick for several reasons, but especially because of its tailored P2P servers.

Once you get all that sorted, you can watch all the Designated Survivor you like because all three seasons can be found on The Pirate Bay, though it’s not as well-represented as, say, The Shield or The Wire.

Designated Survivor is a great watch for anybody into more cerebral tension. Fans of political drama or involved spy thrillers will likely get some kicks out of it, too, and with all the ways outlined above to watch it, there’s no reason not to give it a try.

What do you think of Designated Survivor? Hot or not? Let us know in the comments below, and also tell us about any avenues to watch it that you think we missed. Thank you for reading.