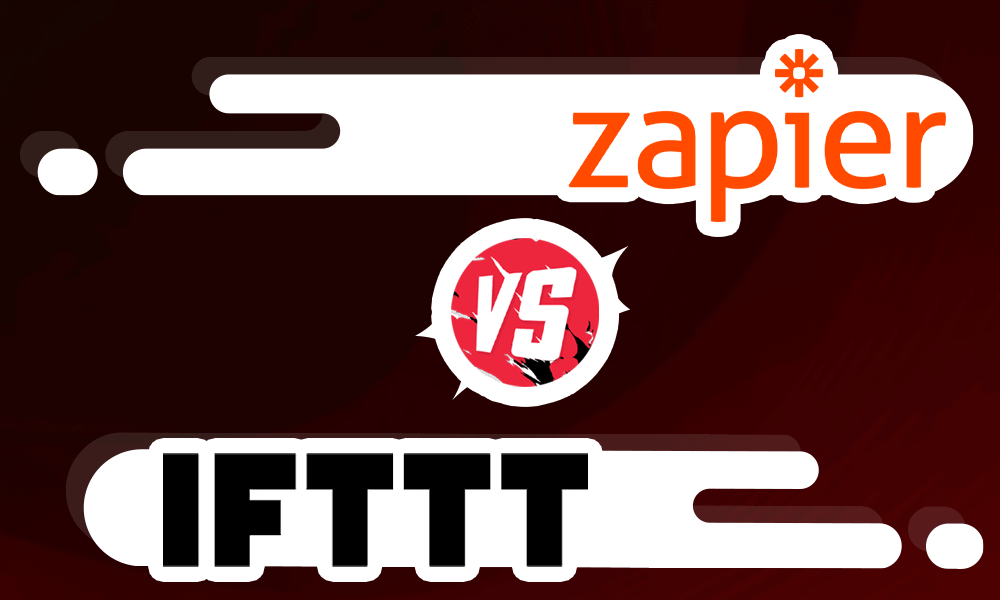 If you’ve ever wanted to link up two or more apps without knowing a scrap of code, then no-code solutions like IFTTT and Zapier are exactly what you’re looking for. Both are excellent services that can automate workflow in the wink of an eye and offer free plans. Deciding which is the better of the two will be a tough question to answer in this Zapier vs IFTTT battle.

That’s why we’ve made this article a little less combative than others like it: while it may make sense for an article like Dropbox vs Google Drive vs OneDrive to drive hard at each and every detail, Zapier and IFTTT are more complementary to each other. For example, Zapier does better for businesses, while IFTTT is a better fit in the home.

Of course, both come with enough functionality to be used independently, but each has an edge in its respective arena. That said, let’s finish up introductions and get started.

Zapier vs IFTTT: The Basics

Zapier and IFTTT are both automation tools that don’t require any coding, relying on a graphical interface instead. Up until the first decade of this century, if you wanted two programs to work together — for example, have a Slack message sent to you every time a new file gets uploaded to your Dropbox — you needed to write your own script, or hope that the developers of the apps did.

However, with the development of IFTTT, Zapier and other platforms like it (even some of our best project management tools, like monday.com, Podio and Airtable have some no-code abilities), it’s become ever easier to have two or more programs interact with each other to perform basic tasks, simply by selecting a function in a dropdown menu.

Knowing how no-code programs work — including their limitations, at times — means you can get all the many programs you likely use in your home or office to work together where necessary, saving you time and maybe even money.

Of our two contenders, IFTTT is the older of the two by about a year, having been founded in 2010 (Zapier was started in 2011). It’s a very powerful, easy-to-use program that’s also cheaper than Zapier, but it has a little less functionality when it comes to business-focused apps. However, it beats Zapier by a mile when it comes to social media and smart home integrations.

Zapier is the younger of our two siblings, but oddly enough is the one with the office job. Zapier specializes in offering not only more apps to link up, but also expanded options for each app. If you need complex automations for a lot of different apps with extended feature sets (like cloud storage and project management, for starters), then Zapier is probably the better choice, despite the price.

We’ll start our not-too-combative comparison by looking at the number of automations available for both IFTTT and Zapier, which are called applets and Zaps, respectively. At first glance, you may think Zapier is the obvious winner here, thanks to its positively huge library of apps, but a second look makes it clear that it’s not only size that matters (when it comes to libraries, anyway).

At time of writing, Zapier boasts that it has integrations for about 3,000 apps, while IFTTT has one-fifth of that at around 600. On top of that, Zapier also offers many more options per app, both for when an action fires, and what each action does. If you need to integrate a lot of different apps that need to perform many different actions, then Zapier may be the best choice.

Zapier’s library is full of all kinds of business apps, from Google Workspace (read our Google Drive review for a full overview) to project management tools, backup services and well beyond. The sky is the limit, and you can also do a lot more with each and every app. Zapier has many more conditions than IFTTT does, so you can experiment till your Zap does exactly what you want it to.

That’s not the whole story, though. IFTTT may only have a fraction of the app integrations Zapier has on offer, but it caters to a different crowd. Where Zapier is the buttoned-up sibling that lets you connect business-oriented programs, IFTTT hangs a bit more loose and is where you go when you want to automate Twitter, Facebook, Instagram and all that.

Besides social media, IFTTT does a better job connecting smart home devices and other IoT applications (read our article on what the Internet of Things is if you need some details on that) than Zapier does, and for a better price. We’ll get into dollars and cents a little further down.

Who Are Zapier and IFTTT For?

So, in short, IFTTT is the better choice for people that don’t want to spend too much and also have more in the way of IoT and smart home stuff to automate, not to mention social media integrations. Zapier, on the other hand, is generally a better fit for business clients, thanks to its massive library.

That said, both can venture into the other’s preserve quite easily; it’s more about what the primary goal is. You can still use Zapier to connect your home security camera to your email, or use IFTTT to send a Slack message when a Trello task is moved.

That’s the what; now let’s turn to the how of creating applets in IFTTT and Zaps in Zapier. In both cases, it’s pretty easy. We have a Zapier guide as well as a guide to IFTTT on the site that will walk you through the basics, but in the end the only skill you need is the ability to follow instructions, as well as the knowledge of exactly what it is that you want.

How to Zap That App

No matter if you’re making applets or Zaps, in both cases you choose an app and a trigger for that app: for example, every time a Trello card is moved into a specific column. Once the trigger is “pulled,” an action is performed — in this case, let’s say an email is sent to you via Gmail.

Setting up this admittedly very simple automation is in both cases a matter of clicking the right boxes in the right order. It shouldn’t take you more than a few minutes to set up basic tasks.

That said, IFTTT is definitely easier to use, or at least it caters more to people who have less of a clue. Though at first its interface may put you off, thanks to its almost childlike blocks that explain a lot of extraneous information, in the end it just means there’s a lot less room for error.

The Trouble With Applets

However, what can get a little annoying with IFTTT is that you first need to pick the app for your trigger and set it up — only then can you pick the action you need performed. There’s a chance, albeit a small one, that the action app can’t do what you need, in which case you wasted a few minutes. It’s no disaster, but it can get annoying.

This is where Zapier shines: you set up every Zap in a single screen, so you know beforehand if the app you need to perform an action is even supported. On top of that, Zapier will come with suggestions for Zaps that are already made, saving you some work.

One downside of Zapier, though, is that you’re never quite sure if a Zap will work, especially if it didn’t come from the recommended list of workflows. As such, you’ll need to test and retest every Zap you create to make sure that it fires the way you intended. IFTTT doesn’t have this problem; it seems triggers and actions are all tested before being put up.

If you need more than one action to fire after a trigger, both IFTTT and Zapier have you covered, as they can both create Zaps and applets with multiple actions — but neither allows more than one trigger. In IFTTT, you just add another action once you’re done setting up the first one, while Zapier is a little better with setting up contingencies and the like.

However, the need to test Zapier thoroughly is pretty important when it comes to more complex Zaps with multiple steps, though generally, if there are any issues with your automations, you can figure it out pretty quickly.

The final criterion we’ll compare our two contenders on is price, which may seem simple at first: while both have an excellent free plan that lets you try them out, IFTTT offers only one paid plan, while Zapier offers four. Note that in both cases, automations with multiple actions are only allowed on paid plans.

Zapier limits both the number of Zaps you can have and the number of actions they can perform on the lower-end plans. So, in the example we used before, where an email is sent when a Trello card gets moved, that’s one action. If you’re on the Starter plan, you can do that 750 times per month.

However, if you append a second action to that Zap, like creating an entry in Microsoft Excel as well as sending an email, then you could only do so 375 times on the Starter plan. That said, you can increase your allotment of actions on each plan for a small fee; check out Zapier’s pricing page for the details.

Still, this can be pretty limiting, so anybody considering a purchase of Zapier might want to do the math and figure out exactly how often their Zaps will fire — or run the risk of having operations grind to a halt just because they ran out of actions.

IFTTT’s pricing is much simpler than Zapier’s. There’s no limit when it comes to actions, though the free plan restricts you to just three automations instead of five. The paid plan comes in just one flavor (there are separate plans for developers; check those out here) and is just dirt cheap when compared to Zapier. It’s less than half the cost of even the Starter plan.

However, as pricey as Zapier is, we feel the higher cost can be justified. It offers five times as many apps to pick from, as well as a lot more actions for each. On top of that, Zapier offers many more suggestions for automated workflows, making life a little easier.

That said, if IFTTT has exactly the automations you need and you expect to be firing them a lot, it’s a no-brainer: go with IFTTT (we have a guide on how to automate backups with IFTTT).

As we said in the introduction, this comparison wasn’t particularly combative. While there is some overlap between Zapier and IFTTT, they do seem to cater to relatively distinct clientele; it’s up to you to decide which one you belong to.

For people who need fewer workflow automations that fire often, or those with a lot of smart gear, they will want to check out IFTTT first. Companies that need a lot of different apps hooked up are probably best off with Zapier. In either case, you can try them both out for free, with no risk to you.

Which of the two do you prefer? Any criteria we missed out on during our comparison? Let us know in the comments below and, as always, thank you for reading.