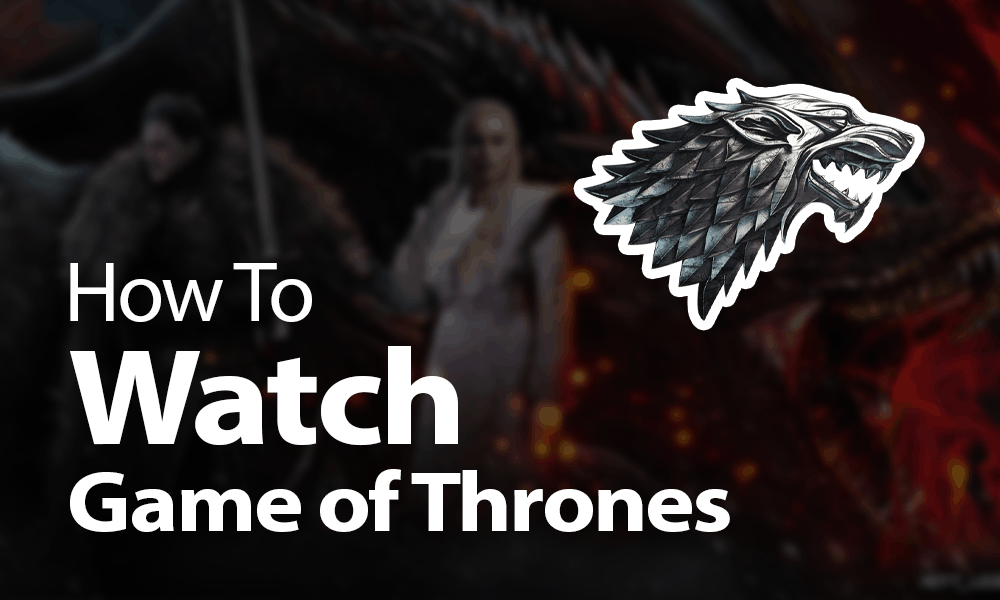 It’s been over two years since the Game of Thrones finale aired in April 2019. Whether you just want to watch the final season to see who gets control of the iron throne, or watch a previous season, we’ll tell you how to watch Game of Thrones.

If you’re starting to forget the rush of watching Jon Snow, Daenerys Targaryen and other characters fight the Army of the Dead at Winterfell, you may want to relive the adrenaline-heavy moments on a Saturday. Keep reading to discover the best way to watch any Game of Thrones season or episode you want.

HBO Max is a WarnerMedia-owned streaming service and features all of WarnerMedia’s properties on the platform, including all eight seasons of Game of Thrones. You can stream Game of Thrones using HBO Max on almost any smart device including Apple TV, iOS, Android and Chromecast through the app or the HBO website.

However, you’ll need a U.S. credit card to sign up for HBO Max if you’re not already a subscriber. If you don’t have a U.S. card, you can still buy an HBO Max subscription using a combination of VPN and PayPal/Apple ID. Connect to a U.S.-based server and pay using your PayPal account or an Apple ID (where you’ve selected your country as U.S.).

The older HBO Now apps have been updated to HBO Max on all devices. Amazon Fire TV lacks the HBO Max app, but the HBO Now app is available and has been rebranded as the HBO app. The HBO app does include Game of Thrones. Alternatively, if you’ve subscribed for HBO via your cable provider, you can use those credentials to create an HBO Max account. However, Amazon Prime Video subscribers will need to purchase Game of Thrones separately.

There’s one caveat here: HBO Max is not available everywhere. If you’re not in one of the regions where HBO Max is available, you can’t view Game of Thrones on HBO Max unless you use a virtual private network. A VPN can help you bypass the geoblocks imposed by a streaming service. It does so by masking your IP, so the platform will think you’re located in the U.S.

Why You Need a VPN to Watch Game of Thrones

HBO Max, the platform where you can watch the old seasons of Game of Thrones, isn’t accessible everywhere. If you’re unable to access HBO Max, you could use a VPN, since it helps you mask your IP address. Choosing a server location in the U.S. makes the platform think you’re physically located in the U.S.

VPNs are also essential to keep yourself secure as you admire Peter Dinklage, Maisie Williams or Lena Headey light up your screen — and VPNs are particularly important when using an illegal streaming website. A VPN that has a strict no-logs policy can keep your online activity private so you don’t get in trouble. The same applies to torrenting, of course.

How to Watch Game of Thrones From Anywhere With a VPN

You can use VPNs to bypass geoblocks by connecting to a server located in a particular country. In this case, you’ll need a VPN to connect to a U.S. server to watch HBO Max. Using VPNs is quite simple, but if you’re new to VPNs, we have you covered.

Step by Step: Watch Game of Thrones With a VPN

The Best VPN to Watch Game of Thrones Online

A VPN with fast connection speeds, unlimited bandwidth and the ability to bypass geoblocks imposed by streaming services makes for a quality streaming experience.

We have an in-depth article covering the best VPNs for streaming, where you’ll find more about the streaming-specific features you should look for and VPNs that have them. If you just want a quick answer, we recommend going with ExpressVPN.

ExpressVPN is a feature-dense VPN. It has everything you need for a pleasing streaming experience — blazing-fast speeds, unlimited bandwidth and the ability to bypass geoblocks on all popular streaming platforms. If you’ve ever tried streaming on slow speed, you know how frustrating buffering can be. Fortunately, ExpressVPN is one of the fastest VPNs out there.

The VPN comes with 160 server locations in more than 90 countries, including the U.S., which will enable you to watch the popular HBO series. If you have streaming devices that don’t support VPNs natively, you can use ExpressVPN’s smart DNS service called MediaStreamer. It allows you to use the VPN on incompatible devices and also improves the overall streaming experience.

ExpressVPN isn’t pocket-friendly, but it’s a great VPN for those who don’t mind spending a little extra for quality service. If you want to see if ExpressVPN lives up to the hype, you can use its 30-day money-back guarantee and claim a full refund if you’re not fully satisfied with it. Read more about ExpressVPN and its features in our comprehensive ExpressVPN review.

NordVPN offers largely the same set of features as ExpressVPN, and claims the second spot on our list of the best VPNs. Two things separate these VPNs, one positive and one negative.

First, the positive: NordVPN is priced considerably lower than ExpressVPN. Unfortunately, it’s not as good for torrenting as ExpressVPN, if you were planning on watching Game of Thrones for free.

We were able to stream HBO shows without any buffering, even in HD and 4K quality. Other than that, NordVPN and ExpressVPN are pretty much neck and neck.

Just like ExpressVPN, NordVPN has a long list of compatible devices. For devices that don’t support VPNs, like Apple TV, you could install NordVPN on your router — it’s one of the best VPN for routers.

NordVPN’s two-year plan works out to about half the monthly price of ExpressVPN. NordVPN also offers a 30-day money-back guarantee, so if you change your mind after subscribing or just want to try it out, you’re entitled to a full refund. If you want to learn more about NordVPN before subscribing, take a look at our NordVPN review.

How to Watch Game of Thrones Online for Free

The only legal way to enjoy the battle for the coveted iron throne for free is by signing up for a free seven-day Hulu trial with HBO Max, where you get unlimited access to HBO’s catalog. A week is plenty of time for binge-watching the entire series (and maybe a few movies and other favorite shows).

If you need more time, there are other ways to watch Game of Thrones online for free — torrenting and illegal streaming. If you decide to go that route, be sure to equip yourself with a VPN.

The Pirate Bay is generally your best bet for torrenting. If you plan on torrenting, consider ExpressVPN, our best VPN for torrenting. To stream Game of Thrones for free, you could also use a website like fmovies.to. Needless to say, free streaming websites are illegal and will flood your screen with ads.

You should also use a VPN, a good antivirus program and pop-up blockers when using illegal streaming websites to protect yourself against malware and to steer clear of the pesky ads and pop-ups.

Final Thoughts: Watch All Eight Seasons of the Seven Kingdoms

The removal of HBO Max from the list of Prime Video Channels took away one of the easiest options for Prime members to watch Game of Thrones. However, there are still a couple of ways to watch your beloved cast walk around with fire-breathing dragons. You could watch Game of Thrones online through subscription services like HBO Max, or use the free trial on Hulu with the HBO add-on.

There are also a few less legal ways to stream Game of Thrones, but all methods warrant the use of a VPN to bypass geoblocks and keep yourself safe.

Now that you know how to watch Games of Thrones, read our guide on how to watch Harry Potter. Tip: it requires an HBO Max or Netflix subscription. If you fancy some movies outside HBO Max, we have other comprehensive guides such as how to watch The Good Fight on Paramount Plus

Do you have other sources where Game of Thrones is available, free or paid? If yes, did you have to use a VPN to access the content? Let us know in the comments below, and as always, thanks for reading!