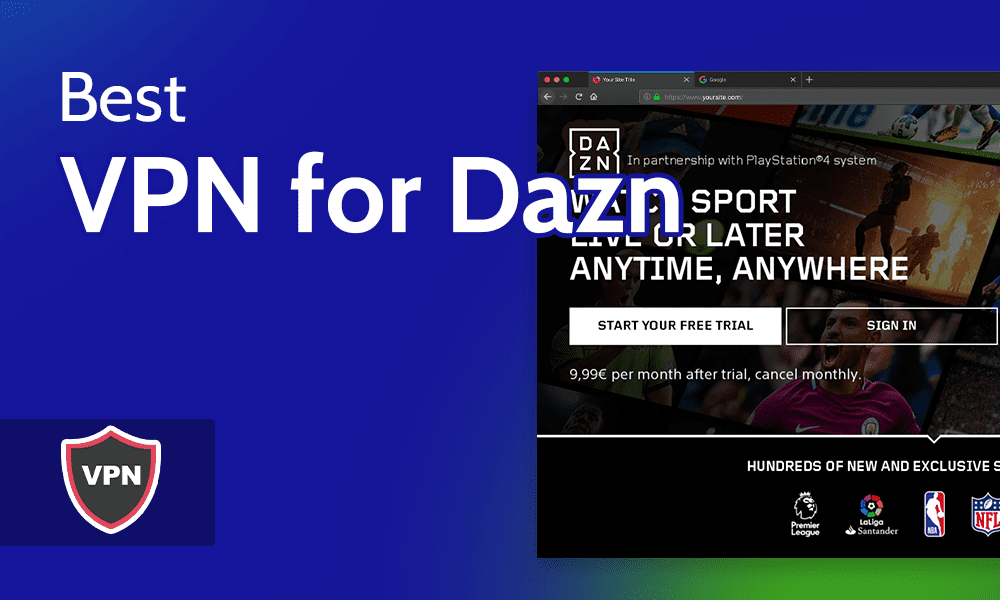 DAZN is accessible in more than 200 countries, but you might not be able to view your favorite sporting events like the Premier League or NBA if you’re in a location where DAZN is inaccessible unless you use a VPN (virtual private network). In this guide, we tell you the best VPN for DAZN, and give you a few other options to choose from (including a free VPN).

When you use a VPN, it will assign you a different IP address based on the location of the server you’re connected to. Connecting with a VPN server located in a country where DAZN is accessible allows you to access DAZN. This is because DAZN will think you’re physically located in the country to which your IP address belongs.

However, selecting a DAZN VPN can be tricky because the platform proactively tries to block VPNs. Not all VPN services can help you watch DAZN. We tested the major VPNs and found a few that work so you don’t have to go through the trouble of trying them out. ExpressVPN is our favorite, but any of the five options will do a good job.

What Makes the Best VPN for DAZN?

We found five VPNs that can unblock DAZN, no matter where you are. While the ability to unblock DAZN is the most essential characteristic of a DAZN VPN, there’s more to look for in a VPN.

Sure, the VPNs listed above unblock DAZN just fine, but we looked at more than just that before putting them on the list. Streaming capabilities are a factor of data allowance and bandwidth. VPNs that don’t cap the data or bandwidth offer the best streaming experience, provided they also offer great connection speeds. A slow VPN can result in buffering and spoil your weekend binge-watching session.

It’s also important for a VPN to have a large enough server network. Geoblocked streaming services often have limited availability. If your VPN doesn’t have multiple servers in the country where the service is available, you might not be able to access the service.

Why You Need a DAZN VPN

DAZN is a sports streaming service that’s only available in select countries. If you’re not in one of those countries because you’re traveling or live there, you’ll need to use a VPN to stream DAZN. You’ll also need a VPN for unblocking DAZN at your workplace or school if the network administrator doesn’t allow access to the DAZN website.

How to Unblock DAZN With a VPN

If you want to set up a VPN and start watching DAZN, but don’t have experience using a VPN, follow this three-step process.

The 5 Best VPNs for DAZN

There are countless VPN services out there, which makes settling on one a bit challenging. We’ve picked five of the best VPNs for DAZN to help you pick one that suits your needs and budget.

ExpressVPN manages to get past geoblocks on all major streaming platforms, including DAZN. The superior bypassing capability is a valuable feature if you’re a cord-cutter. If you’ve got more cord-cutters in the family, ExpressVPN will allow five of you to use the VPN connection simultaneously.

It uses AES-256 encryption that you can pair with one of the several encryption protocols. The protocols on ExpressVPN include OpenVPN, IKEv2, L2TP and Lightway (its proprietary protocol that offers better speeds). You’ll get security features like a kill switch (called Network Lock on ExpressVPN), IPv6 leak protection and split tunneling. We go into detail about ExpressVPN’s offerings in our ExpressVPN review if you want to learn more.

ExpressVPN is the best VPN for streaming. The reason is its unmatched connection speeds (it truly is the fastest VPN) combined with unlimited bandwidth. It’s perfect for when you want to watch HD sports on a streaming service like DAZN. You’ll experience no buffering, provided your ISP offers good speeds too, of course.

ExpressVPN is expensive because it offers a top-of-the-line VPN service. If you don’t mind splurging a little, ExpressVPN is the best VPN provider you’ll find. The 15-month plan, its best value, costs $6.67 a month. You can use the 30-day money-back guarantee to see if it fits your needs. If you’re not satisfied, you can claim a full refund.

NordVPN closely follows ExpressVPN in most aspects, including speed and security. If you’re looking for a fast, reliable and secure VPN that costs less, NordVPN is it. It has an automatic kill switch, offers split tunneling and AES-256 encryption along with OpenVPN, IKEv2 and NordLynx (its proprietary protocol based on WireGuard) protocols.

The VPN service does offer several more security features, though. For instance, it allows using the ChaCha20 cipher with NordLynx. You can also access the Dark Web Monitor feature on iOS, macOS and Android devices to find personal information on websites that could be selling it. Want to learn about NordVPN? Check out our NordVPN review.

NordVPN has more than 5,000 servers spread across 60 countries. This means you can unblock most DAZN libraries regardless of where you are. Having multiple servers in the same location is also beneficial because if one of the servers is overloaded or fails to bypass geoblocks, you can try other servers.

NordVPN costs $3.99 per month on the two-year plan, its best value. The pricing seems more than reasonable given how similar its feature set and performance are to ExpressVPN’s. Regardless, you can still use the 30-day money-back guarantee if you’re not fully satisfied with the service.

Surfshark is one of the newer services on the list, but it still manages to compete neck and neck with several major VPNs. The VPN provider has managed to grow its server network to over 3,200, with server locations in 65 countries.

It comes with AES-256 paired with OpenVPN, IKEv2 and WireGuard, or you can use the ChaCha20 cipher. Surfshark also has double VPN (MultiHop), a kill switch and split tunneling (Bypasser). While Surfshark doesn’t come with IPv6 leak protection, we didn’t notice any IP, DNS or WebRTC leaks during our tests. If you’re curious about what else Surfshark offers, check out our comprehensive Surfshark review.

The best thing about Surfshark is that you can use the VPN on as many devices as you want simultaneously. If your brother wants to watch DAZN on Android TV while you want to simultaneously stream DAZN on your iPad with 10 other people using the same VPN connection, Surfshark is the way to go.

Surfshark is priced quite reasonably at $2.49 per month on the two-year plan. Throw the unlimited simultaneous connections into the mix, and it brings the per-user price significantly below several others on the list. You also get the 30-day money-back guarantee with Surfshark, so in case it doesn’t fit your needs, you can get all your money back.

CyberGhost offers a 24-hour free trial on desktop. You get access to all CyberGhost features even on the free plan, so you can test it out completely before you pay any money for the service.

The VPN service offers one of the largest server networks with 7,900 servers, a transparent no-logs policy and security features. Plus, it’s sufficiently fast for buffer-free streaming. Even when streaming sports in HD, you’re unlikely to face any lag.

CyberGhost defaults to using the IKEv2 protocol with AES-256 encryption, but we recommend using OpenVPN or WireGuard for the best security. It also has all the security features we look for in a VPN including an automatic kill switch, DNS leak protection and split tunneling. If you need more information, head over to our thorough CyberGhost review.

CyberGhost lets you establish a set of “smart rules.” Suppose you’re going on a trip and carrying your computer along just so you can get an hour’s worth of sporting action before going to bed. You can set a rule where launching the VPN automatically triggers DAZN, so you can start watching sports events right away.

Windscribe tops our list of best free VPNs. Unlike most free VPNs, it’s secure and reliable. It has several Canadian servers available for free so you’ll be able to unblock DAZN Canada easily, but if you want access to more servers and features, Windscribe also has a low-cost paid plan.

You get AES-256 encryption with OpenVPN, and IKEv2 if you’re using an Android device. Split tunneling is also available on all devices and operating systems except Linux and macOS Big Sur. Windscribe’s privacy policy is straightforward and clearly states that it doesn’t collect any data that can be used to trace anything back to you.

Unlike other services, Windscribe’s browser extension doesn’t work as a switch for the VPN app, but it is packed with features. For instance, it comes with an ad blocker called R.O.B.E.R.T. that also lets you block specific websites or add exceptions for website categories you’ve blocked. Learn more about what Windscribe offers in our Windscribe review.

The build-a-plan option gives you access to premium features for a fairly low price. The minimum checkout value is $2 per month. You can buy one server location for a dollar and get unlimited data and R.O.B.E.R.T. for another dollar, or just get two server locations.

Can I Use a Free VPN for DAZN?

Yes, you can use a free VPN like Windscribe to stream DAZN content. However, most free VPNs are slow, so you might have to suffer through buffering. Also, if you’re using one of the worst VPNs, you’ll end up compromising your security and privacy. If you’re on a budget, it’s best to consider a low-cost VPN like Surfshark or CyberGhost.

ExpressVPN is the best VPN to watch DAZN, but if you’re looking for something low-cost, consider NordVPN or Surfshark. All VPNs on this list do a fine job of accessing DAZN, and likely any other streaming platform you use. They differ in terms of the features and performance they offer, though, so choose one based on your budget and start watching DAZN.

ExpressVPN is our top choice, owing to its combination of advanced features, high speed and excellent security, but NordVPN isn’t far behind and comes with a lower price tag. If budget is the primary concern though, cheap VPNs like Surfshark and CyberGhost or a free option like Windscribe might be the best bet.

Have you used a VPN to access DAZN libraries? Which DAZN VPNs did you use? Do you agree with our choices or did we miss your favorite VPN? Let us know in the comments below, and as always, thanks for reading.