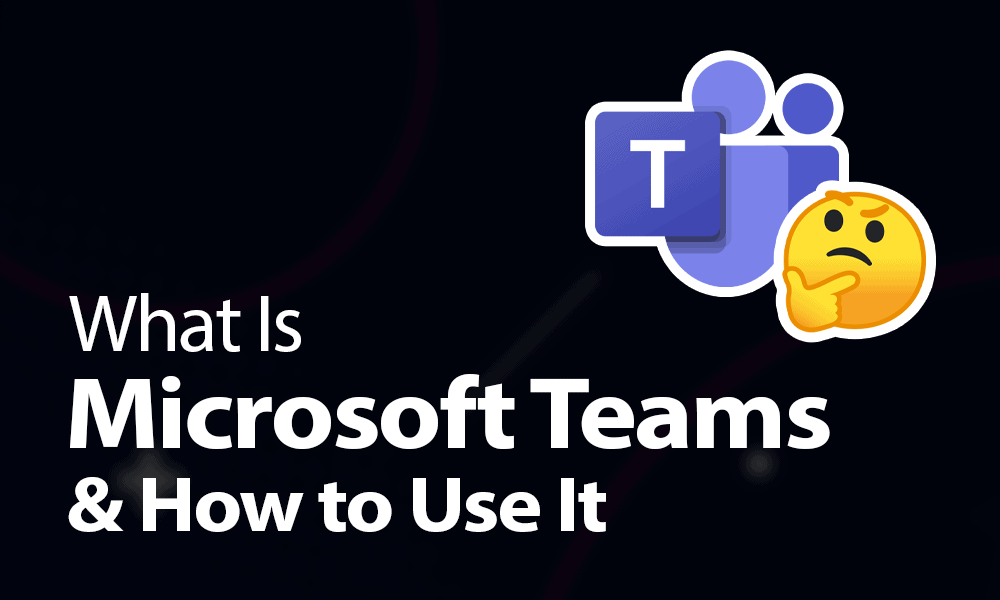 Microsoft Teams is a free piece of software that lets you communicate with coworkers. It features some pretty interesting features and is integrated with the rest of Microsoft’s software, making it an attractive messaging option for people who work a lot within OneDrive or SharePoint. In this article, we’ll go over what Microsoft Teams is and how it works.

Overall, we like Microsoft Teams well enough, though we feel other collaboration platforms do an equal or even better job. Still, the Teams app has a lot going for it and for certain teams it would be a great fit. To find out if you’re in that group, stick with us as we take a quick tour of Microsoft Teams’ features.

What Is Microsoft Teams & Who Is It For?

Microsoft Teams is Redmond’s reply to Slack, a free app that will let you send messages and make video calls with other people on your team — though for anything besides chat you’ll have to sign up to the paid version. If you’re familiar with Microsoft 365 or OneDrive (read our OneDrive review), you have an idea of everything that’s included.

The chat version is pretty good, though nothing we haven’t seen before. You can flit between private chats with specific people to group chats with entire teams. Teams can correspond to small groups of people focused on specific tasks or entire departments; it’s entirely up to you.

Like with other collaboration software, you have the choice of either using the web client in your browser — which is what we did — or installing it on your desktop or mobile devices. It supports all major operating systems, including, surprisingly, Linux.

As part of the greater Microsoft 365 suite — formerly known as Office 365 — it’s best suited for teams that already use many of Microsoft’s other products, like Word, Excel or even Microsoft To Do. If you’re not as embedded in the Microsoft ecosystem, we’d probably recommend you try Slack instead, as it does what Microsoft Teams does, only better.

This is because we like Slack’s messaging more. While both it and Teams have what’s called threaded and persistent conversations — which is corpspeak for how chats stick around and can be taken into a subchat — we overall prefer chatting on Slack as it works a little better, has a nicer font and makes it easier to keep track of different chats.

However, Microsoft Teams does have one big advantage over Slack — namely that it allows for video calls and screen sharing on the free plan, while Slack does not. If you find yourself relying a lot on calls, then Teams may be the better choice.

Plus, Slack only lets you search up to 10,000 archived messages in free workspaces, while Microsoft Teams doesn’t have a limit, letting you search your entire message history.

The main feature of Microsoft Teams is, of course, the chat. It’s pretty standard fare by now, so if you’ve used one messaging app you’ll find that Microsoft Teams isn’t all that different. You enter messages at the bottom of the screen, and see them pop up on the main part. What sets Microsoft Teams apart, though, is that it has some interesting extras.

For instance, you can publicly praise team members with just a single click, or even create a proposal for the team’s approval. It’s pretty handy for real-time collaboration, though if that’s your focus you may want to check out our roundup of the best project management software instead, as those programs offer a lot more bells and whistles.

Other than that, you can attach files to messages — like regular file sharing, this should make the files pop up in your coworkers’ OneDrive — and even embed emojis and GIFs in messages. It’s a pretty comprehensive collaboration platform overall.

Managing Teams users is pretty easy. Individual users can be contacted through the “chat” button in the sidebar, while you can send a message to a team with the — you guessed it —  “teams” button.

The “teams” page is also where you add new members to your team as well as Microsoft Teams as a whole — the nomenclature gets confusing. It’s a really simple system, though it’s a bit odd that there isn’t a dedicated admin page like Slack has. It’s a lot simpler than doing it through the teams page, in our opinion.

Once you have teams set up, you can have video meetings, either with a whole team, or just one person. Call quality overall seems fine — we had no real issues, anyway — though we don’t like it quite as much as Zoom.

Still, it does a decent job. Instead of setting a video meeting, you also have the option of audio conferencing, great for people working from home in their pajamas.

During a video chat, you can always opt to share your screen, which works pretty well. Interestingly enough, Microsoft Teams also lets you share your screen in chat, so without the calling. We really like this as it makes it easier to do a quick share to explain something and then get right back to what you were doing.

Probably Microsoft Teams’ greatest strength is as part of the microcosm of Microsoft apps called 365. All the programs and apps under this umbrella automatically share data, users and everything else, which makes it very easy to flit from one app to the next.

Though it won’t be to everybody’s liking — sometimes you don’t want apps talking to each other for privacy reasons — it does make getting started on new programs a lot easier. If you already use a lot of Microsoft’s programs, Teams will seamlessly fit into your strategy.

There are two versions of Microsoft Teams. The regular one, called Microsoft Teams, is a paid program that’s part of the Microsoft 365 Personal subscription. This subscription costs $69.99 per year for one person. This includes all of the 365 apps, plus 1TB of storage. In all honesty, this isn’t great pricing as you can get all of 365’s functionality for free using other, better apps.

For example, you can get Microsoft Teams’ chat function for free from Slack, and then use Google Drive and get 15GB for free, plus a number of great office apps, like Google Docs and Google Sheets (read our Google Drive review for the details).

The 1TB of storage is OK, but if you look at our Icedrive review, you’ll see at least one provider that offers 1TB for just $50 per year.

If you can share the subscription with someone else it’s a slightly better deal, as Microsoft 365 Family costs just $99.99 per year for up to six users, with each getting 1TB of storage. That said, you’re still paying for something you can get elsewhere for free.

Thankfully, there’s a free version of Microsoft Teams, called Microsoft Teams Free (classic) and, yes, the parentheses are part of the name. It’s a slimmed-down version of the program, bringing down the storage capacity to 2GB per user, capping the number of users at 300 and stripping much of its functionality — read the full comparison between the two here.

Overall, we like Microsoft Teams well enough: it’s easy to use and everything is clearly laid out. As a free program, we prefer Slack, though the paid plan has some nice options for video conferencing. Also, the integration with the rest of Microsoft’s software can come in handy.

What do you think of Microsoft Teams? Is it better than Slack? Does it work as well as advertised? Let us know in the comments below and, as always, thank you for reading.