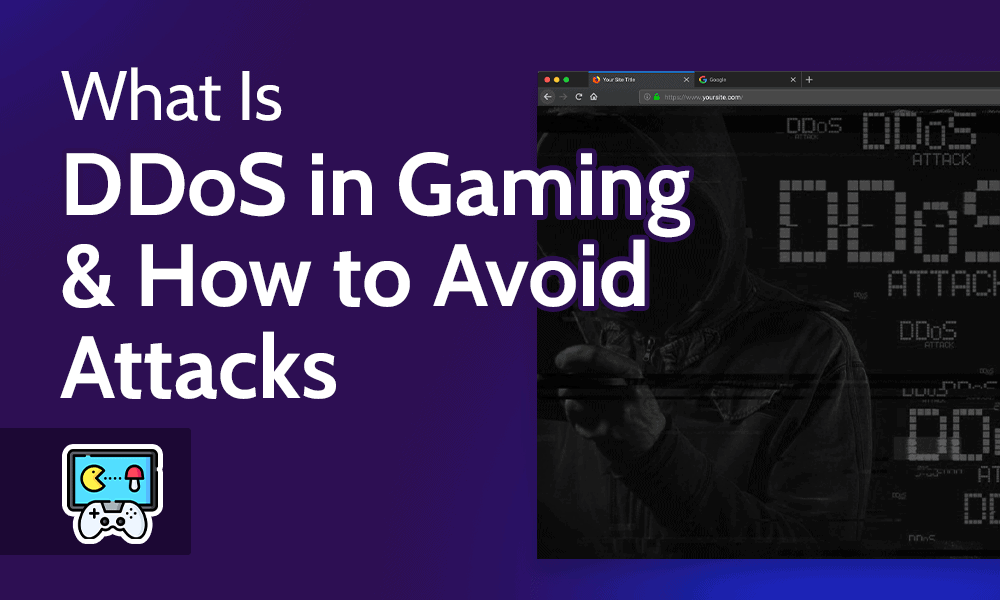 Imagine this: You’re playing a game of Counter Strike against a team you’ve been trying to beat for quite some time. Right on the edge of victory, you get lag spikes, or maybe your game disconnects. While it might be a coincidence, it could also be a DDoS (distributed denial of service) attack. Knowing what is DDoS in gaming can help you prevent such a situation.

While DDoS attacks are used mostly to target big companies, networks and websites with large infrastructures, gamers have found their personal computers and networks to be a prime target for attackers in recent years. Attackers also target the infrastructure of large online gaming platforms, making it impossible for gamers to use them.

If you’ve recently been the target of such an attack, and you’d like to know a bit more about DDoS attacks, how they work and how you can protect yourself, read on.

What Is DDoS in Gaming?

DDoS attacks are usually carried out against websites, but they can happen in online gaming too. The goal of the attacker is to disrupt your internet connection in a way that causes issues with the online game, such as latency spikes or connection drops. If you’re playing a competitive online game, this could cost you your victory.

Imagine playing a game of Fortnite, but every time you try to build, there’s a one-second delay. Or playing a game of Counter Strike: Global Offensive, but your bullets fire half a second too late. Even though these are seemingly minuscule periods of time, they’re more than enough to give your opponent a competitive advantage.

What Is a DDoS Attack?

A DDoS attack is a cyberattack where the attacker sends illegitimate requests to a web server, causing it to either slow down significantly or crash completely. Consequently, legitimate requests can’t be fulfilled, and authorized users won’t have access. We explain how they work in more detail in our DDoS attacks piece — we recommend you give it a read.

How Does a DDoS Attack Work in Gaming?

There are two ways attackers can launch attacks: against individuals, and against an entire network. When attacking an individual’s personal system, the entire online gaming session becomes extremely slow and unplayable, giving the attacker a sizable advantage. This requires the attacker to know your IP address, which can happen if you download malware that sends your IP address to the attacker.

If they do know it, they would need a network of computers, known as a botnet, to repeatedly send requests to your network. In this day and age, you can rent a botnet for the sole purpose of launching a DDoS attack. The only reason someone might do this in gaming is to gain a competitive advantage over you in-game — and if you fail to protect yourself, it works.

On the other hand, complete online gaming platforms like the PlayStation Network and Xbox Live have also suffered attacks that rendered them useless for extended periods of time. Players were unable to access said networks, leaving millions of gamers frustrated.

DDoS attacks on gaming networks and online gamers as individuals have happened before, with arguably the most notable example being the 2014 Christmas DDoS attack on both Sony’s PlayStation Network and the Xbox Live network. The attack affected almost 160 million gamers, and it took quite some time to get the networks back to normal.

A more recent example also involves top-ranked Apex Legends players who used DDoS attacks to overload the game’s servers and gain an advantage. When they were knocked down, they would trigger a DDoS attack on the Apex Legends gaming servers. After videos were posted of the situation in question, the players were promptly banned from the game.

There is also the Mirai botnet, which carried out cyberattacks against a French telecom provider and a U.S. tech company. While initially there were fears that this was an attempt by cybercriminals to disrupt the election that was to take place, it turned out to be three college students who were trying to get an advantage in Minecraft.

Minecraft has a cutthroat world of private servers with owners who are making hundreds of thousands of dollars per month from them. The students behind Mirai wanted a piece of that cake. They targeted tools that protected such servers from DDoS attacks, with the goal of attacking the servers afterwards and potentially stealing their customers and moving them to their own servers.

Can DDoS Gaming Attacks Be Avoided?

For the most part, DDoS attacks can be avoided, but taking steps to protect yourself as an individual gamer is very different from protecting an entire network.

If you’re trying to protect a network or a website, the most critical aspect to consider is your hosting provider and their firewall. While it’s not a be-all and end-all solution, it’s a great way to block simple attacks and give you time to respond. Monitoring is the other thing you want to be doing, because the best defense against a DDoS attack is detecting it early.

As an individual, the first thing you should do is use common sense. Don’t open spam emails or download software from sketchy websites that might have malware that sends your IP address to a potential attacker. The second is to use an antivirus or anti-malware software and the third, and probably best thing you can do is to use a VPN, or virtual private network.

Can a VPN Protect Against DDoS Attacks?

Yes — in fact, that’s one of the things VPNs are best for. For attackers to carry out a DDoS attack, they’ll need your IP address. If you access a website (or a game server) directly, that IP address is logged by the website or server. However, a VPN will route your connection through one of their servers, and give you a new IP address that hides your real one. Unfortunately, if an attacker already has your IP address, a VPN won’t be able to do much.

A reputable VPN provider will do a lot more than just give you new IP addresses. It will also give you an encrypted connection that’s nearly impossible to compromise, as well as features like a kill switch that disables your internet access if you’re disconnected from the VPN server. You’ll also be able to virtually change your location — for some online gamers, that could come in handy if they want to play a game that’s not available in their region, or get easier lobbies.

While the gaming industry used to frown upon the use of VPNs because they introduced additional latency, the technology has improved by leaps and bounds. Any VPN from our list of best VPNs for gaming will do a great job at protecting your connection from DDoS attacks while having little to no impact on latency.

How to Prevent DDoS Attacks in Gaming

If you’re trying to enjoy your online games without DDoS attacks disrupting your network, the best thing you can do is get the best VPN for DDoS protection that will make sure your IP address remains private. If you’re still worried about speeds, you should check out our recommendations for the fastest VPNs — all of them do a great job.

Users who don’t mind spending a bit more on a premium VPN should read our ExpressVPN review, as it’s an excellent choice when it comes to protecting your home network from DDoS attacks. NordVPN is an alternative (you can read our NordVPN review), a more affordable pick that’s just as good in the security department and performs almost as well.

What to Do If You Think You’re Being DDoSed

DDoS attacks often come without warning, and recognizing that one is happening to you is easier said than done. If you think that you’re the target of one, you should first unplug your modem and router, then turn off your computer and turn them back on after five to ten minutes. If you’re still having issues, you might be DDoSed.

Most internet service providers will give you a dynamic IP address which will change in 24 to 48 hours, and the attacker won’t know your new one. However, if you can’t wait that long, you could reach out to your ISP and ask them to change your IP address right away.

While members of the gaming community should know how to deal with a DDoS attack, it’s even better to prevent it. Using a VPN for your home network and a good firewall for your website or private servers is a great way of ensuring you don’t fall victim to this dangerous recent trend of the gaming industry.

At the end of the day, nobody wants to deal with a DDoS attack while gaming. They’ll turn a fun experience into a frustrating one, and if you’re playing something competitive, there’s a big chance that you’ll lose the game. That being said, you can protect yourself by being careful with what you do online, and by using a reliable VPN.

ExpressVPN and NordVPN are two excellent options for VPNs that help keep your IP address private, and thus, protect you from DDoS attacks. Have you ever been the target of a DDoS attack? How did you deal with it? Let us know in the comments, and as always, thank you for reading.