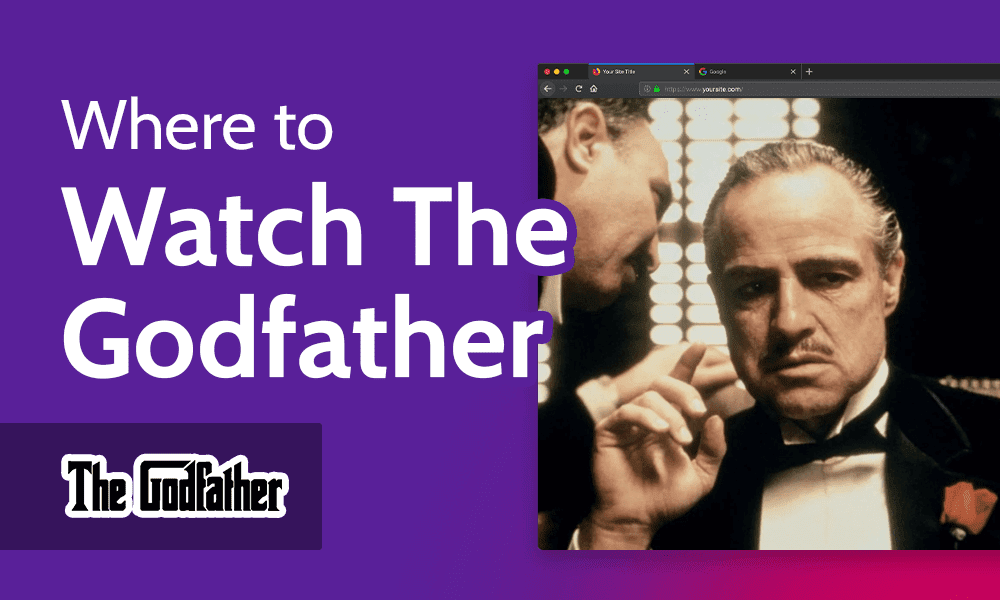 The Godfather, directed by Francis Ford Coppola, is regarded as one of the best films ever made. It tells the story of the Corleones, a 1940s Italian American Mafia family. Based on Mario Puzo’s novel, also named The Godfather, it features fictional characters inspired by real-life mobsters. This guide shows you how and where to watch The Godfather online.

Vito Corleone (Marlon Brando), don of the family, forms an olive oil importing company as a front for his illegal operations as one of New York’s most powerful crime bosses. Meanwhile, Vito’s youngest son Michael (Al Pacino) just wants to live a normal life and leave the Mafia to his older brothers Sonny (James Caan) and Fredo (John Cazale).

However, everything changes when Vito’s health begins to fail, forcing Michael to take a more active role. Over the course of the movie, we watch Michael get drawn deeper into crime and corruption, and transform into a callous Mafia boss.

Where to Watch The Godfather

Since The Godfather trilogy was released between 1972 and 1990, it wasn’t originally available for viewing on online streaming services. Thankfully, though, many services have hosted the films over the years. The specific platforms hosting them can change pretty quickly, but there are also services that allow you to rent or buy the films.

Because of geoblocks, the services where you’ll find the trilogy depend on where you’re based. Services need to have a license to stream copyrighted content in particular countries. For instance, while you might find a movie on Amazon Prime U.S., it might not be available on Amazon Prime U.K. because it’s already streaming on a different U.K. service.

A virtual private network (VPN) can help you bypass such blocks. A VPN lets you connect to a server in a different country and access the content as though you were really there. We’ll get into how to do this in the “how to watch The Godfather with a VPN” section.

Which Streaming Services Have The Godfather?

We found two services that have all three of The Godfather films available — Amazon Prime Video and Netflix. However, we only found it in the Italian Amazon Prime library and the North Macedonia Netflix library.

Amazon Prime costs $15 per month (or $9 if you want Prime Video without the other Amazon Prime benefits). New customers can also get a free 30-day trial.

While all three of The Godfather films are available on Netflix in North Macedonia, you can also find part I on Netflix Australia and parts I and III on Netflix Italy.

Alternatively, you can buy or rent The Godfather from the following services:

How to Watch The Godfather for Free

We checked some free and legal streaming services, such as Pluto TV and Tubi, but couldn’t find any of the Godfather films. If you want to stream it for free, your best bet is to make use of Prime Video’s free trial. If you’re not in Italy and need to use a VPN, you can get a refund when you’re finished by using the VPN’s money-back guarantee.

Of course, you might also find The Godfather on an unofficial streaming site or decide to torrent it. If you do go this route, you should keep in mind that you’ll be watching copyrighted content and many torrents or free streaming sites pose a risk to your device’s security. It’s important to protect yourself with a decent antivirus and a VPN with strong security.

How to Watch The Godfather With a VPN

In this section, we’ll show you how to watch The Godfather using Amazon Prime Video Italy. If you’re not in Italy, you’ll need to use a VPN to access the Italian library. We’ve used ExpressVPN, our top streaming VPN, for this example. You can also use these steps to access other streaming services.

The Best VPNs for Watching The Godfather

There are lots of VPNs on the market, but many don’t have what it takes to access geoblocked streaming services while also keeping you protected. ExpressVPN is the best overall VPN, but NordVPN isn’t too far behind. You can find out more about each service below.

If you’re a regular Cloudwards reader, you know that it’s a rare occurrence for ExpressVPN not to be at the top, and this article is no exception.

If you sign up for ExpressVPN, your online security and privacy are in great hands, and accessing pretty much any streaming service is easy. Its fast speeds mean you’ll have a top streaming experience, and it has enough servers to ensure you’re not blocked.

However, ExpressVPN isn’t cheap. Your best bet is to opt for the yearly plan, since its monthly payments work out to be about half the cost of the month-by-month plan. If you’re not sure about signing up for such a lengthy period straight off, there’s a 30-day money-back guarantee. Read our ExpressVPN review to find out more about the service.

NordVPN is second on our list, but it’s very close to our top choice. It only misses out due to a clunky mobile UI and the fact that ExpressVPN wins in some feature areas. In fact, NordVPN beats ExpressVPN in our ongoing speed tests, making it the fastest VPN. It can get into streaming services with ease too, and has servers in Italy for watching The Godfather.

Overall, NordVPN is easy to use and provides a nice interactive map, as well as a list view, so you can easily choose a relevant server. However, that user-friendliness doesn’t translate well on a mobile device and it can get pretty frustrating to use (see our NordVPN review).

If you want to take it for a spin, it has an affordable long-term plan, and you can cancel within 30 days for a full refund if you change your mind.

If you’re looking to scratch off one of Francis Ford Coppola’s greatest creations from your watch list, or you want to watch Al Pacino in one of his best roles as Michael Corleone, we hope this guide on how to watch The Godfather has helped.

Whichever platform you choose, if you need to bypass geoblocks, then ExpressVPN is a service you can rely on. Plus, the 30-day money-back guarantee means you can get your money back if you don’t like it.

Which service will you stream The Godfather on? Will you need to use a VPN? If so, which one will you choose? Do you think The Godfather is the film that kickstarted Al Pacino’s career? Let us know in the comments below and, as always, thank you for reading.