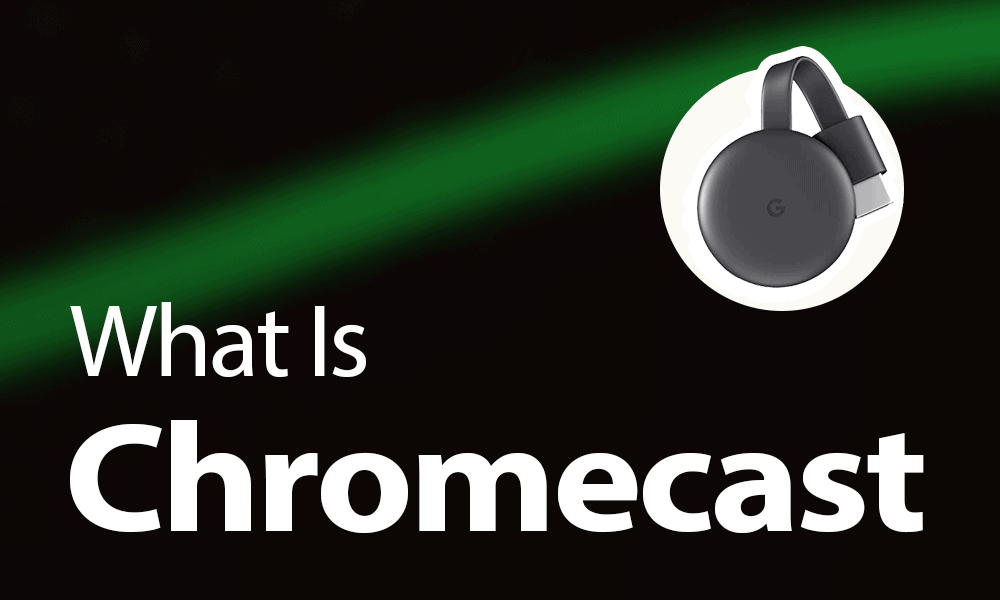 Chromecast, Roku, Fire TV Stick… it’s completely understandable if you feel perplexed by the number of streaming devices on offer today. Have you ever wondered, “what is Chromecast?” Well, we are here to cut through all the jargon and explain exactly what Chromecast is, how it works and what you can do with it.

If you’re longing for a home cinema experience but don’t want to splash the cash on a smart TV, grab some popcorn and read on.

Chromecast is the name for Google’s line of streaming devices, or dongles. Streaming devices are hardware that connect to your TV and internet, allowing you to stream and cast content like movies or music on your TV.

There are currently two Chromecast models available on the Google store: Chromecast and Chromecast with Google TV. The classic Chromecast lets you stream content from your mobile device or tablet to your TV, it functions solely as a casting device.

The most recent model is even more advanced. When Google released Chromecast with Google TV, it took things up a notch with a brand-new user interface.

We explain more in our Chromecast buyer’s guide, but for now, let’s explore the fundamentals of how Chromecast works.

How Does Chromecast Work?

If you fancy a night in with Stranger Things or The Crown but want the full-screen, home cinema experience, you might want to consider a Chromecast. It uses a protocol called Google Cast to allow you to put your content up on the big screen and get the best out of your viewing time.

One of the great things about Google Chromecast is how easy and streamlined the setup process is (check out our guide on how to set up Google Chromecast). If you’ve got a TV with an HDMI port, phone or tablet and WiFi network, you’re good to go (though there is a way to use Chromecast without WiFi, too).

What Is Google Chromecast Used For?

While Google Chromecast is mostly used to stream movies and shows, this is far from its sole purpose.

You can also use Chromecast to stream music, which is great if you’ve got a party planned and want your Spotify playlist up on the big screen. (If you’re interested in learning about how to get around geoblocks when using Spotify, check out our How to Unblock Spotify article.)

If you want to share those holiday photos with family and friends without squinting over a phone, Chromecast lets you cast them to your TV. For this, you’ll need the Google Photos app or to go to photos.google.com on your Google Chrome browser on a laptop. Check out our Best Online Storage for Photos guide to find out more about keeping your photos safe.

Casting from your laptop to your TV with Google Chromecast is another cool feature. This means your TV can even function as a second monitor. You just need to make sure you have Google’s Chrome web browser installed. You can find specific instructions on the different ways to cast from your laptop in the Chromecast Support Center.

If you’re using Chromecast with Google TV, you will have access to the new user interface on your TV screen. This means that you can control media directly using the remote provided without having to use your phone, though you will still need to use your phone/tablet for setup. Users of the latest model may also be pleased to learn that gaming is another feature it offers (check out our list of the best Chromecast games).

Can You Use Chromecast With Any TV or Mobile Device?

Chromecast is compatible with Android phones or tablets running Android 6.0 or later and iPhones or iPads with iOS 12.0 or later.

As for TVs, the general rule of thumb is that if yours has an HDMI port, you should be fine. If you’re using an older TV with composite (red, yellow, green) inputs, you can purchase an HDMI-to-analog converter (RCA) to use Google Chromecast.

If you’re after specifics, the exact requirements for TVs, according to the Chromecast Support Center, are as follows:

Chromecast Ultra and Chromecast with Google TV can stream up to 4K. The support center lists the following requirements for watching in 4K:

For HDR content, you will need an HDR-capable TV. In terms of WiFi, Chromecast supports all wireless networks with WiFi 802.11ac (2.4 GHz/5 GHz).

Chromecast with Google TV comes with a small remote control, and you can also control the Chromecast Ultra with a Stadia controller. Example voice commands could be “open Amazon Prime Video” or “play (insert favorite Amazon Prime Video series here).”

With the Chromecast with Google TV, you can give voice commands by pressing the Google Assistant button. It also has a voice match feature. It works by familiarizing Google Assistant with your voice, so it can customize the interface specifically for you.

While the classic Google Chromecast doesn’t have the voice control feature, you can use the Google Home app to control the streaming device.

Chromecast with Google TV vs Roku vs Apple TV

One difference between Chromecast with Google TV and similar devices is the setup. Chromecast with Google TV is set up using your Android or iOS device. Firesticks and Rokus are set up using a TV remote. With AppleTV, you can use either an iOS device or a remote. All of the devices are designed for a pain-free setup, but some users may prefer the streamlined Google Home app experience.

Each device’s interface has its own streaming experience. For example, Firestick has a lot of Amazon Prime Video content, making it a good choice for Amazon Prime subscribers. Roku’s interface is famously easy to navigate. Chromecast with Google TV personalizes and organizes all of your content, which definitely gives it an edge. Again, it mostly comes down to personal preference.

Chromecast Apps: What Can I Watch on Google Chromecast?

Chromecast is supported by a multitude of apps. We’ve put together a list of some of the most popular ones to give you an idea. Check out Google Store to explore all options, paid and free.

Please bear in mind that these apps are not included in the cost of your Chromecast device. Your subscription to them is entirely separate, though Google sometimes offers bundles. At the time of writing, you can get a Google Chromecast-Netflix bundle in some countries. In the offer, you get a Chromecast with Google TV and six months of Netflix for $89.99.

You may have heard that many streaming services like Netflix have regional restrictions in place. If you want to learn how to get around this and watch what you want, when you want, check out our Best VPN for Netflix article. We also have Best VPN for Hulu and Best VPN for Amazon Prime Video articles if those apps are more to your liking.

If you’re looking for an easy way to stream content but don’t want to invest in a more expensive smart TV, Chromecast could be just the thing for you. Hopefully this guide helped you understand what Chromecast is and what you can do with it.

Do you have a Chromecast, or are you planning on buying one soon? Which model? Let us know your thoughts and experiences in the comments. As always, thanks for reading.