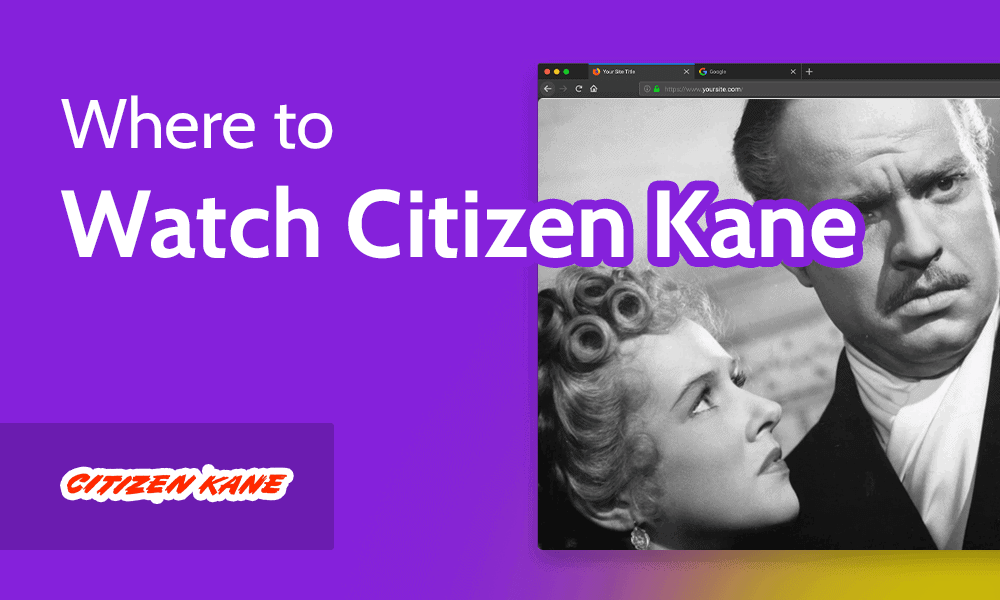 In the world of streaming services, getting a hold of legendary movies like Citizen Kane has never been easier. That said, it’s spread across various streaming services and libraries — some of which are not available in every country.

A VPN, like ExpressVPN, can solve this problem. This guide explains how to watch Citizen Kane with a VPN from anywhere.

In Citizen Kane, newspaper tycoon Charles Foster Kane utters his last word, “rosebud,” before dying in his sprawling mansion, Xanadu. A reporter, Jerry Thompson, interviews the millionaire’s associates and explores his past to unravel the meaning of Kane’s cryptic final word.

While researching, Thompson gets a deeper look into Kane’s intriguing life stories — his early mentorship under a wealthy banker, a New Yorker named Walter Parks Thatcher; his rise to prominence in the publishing world; his complex and troubled relationships; and his reclusive later years. Now let’s get straight into how and where to watch this celebrated film.

Where Can I Watch Citizen Kane Online for Free?

You can watch Citizen Kane for free with an Amazon Prime Video 30-day free trial in Canada. If you’re outside Canada, you’ll need to connect to a Canadian VPN server to access the Canadian library. We’ll show you how to do that below.

How to Watch Citizen Kane With a VPN

You can also use this method to access your other streaming service accounts from overseas. For example, if you want to watch Citizen Kane on HBO Max but are traveling somewhere HBO Max isn’t available, simply connect to a server in an HBO Max available country like the U.S., and log in to your account as normal.

Streaming a film as renowned as Citizen Kane calls for only one of the very best VPNs to get the job done. Here are our top three recommendations.

Whichever service you’re planning to access, ExpressVPN is an excellent VPN for streaming. As well as being the most secure VPN around, ExpressVPN is also the best VPN for beginners, thanks to its no-nonsense desktop and mobile apps. If you’re a complete newbie, and a bit nervous about using new software, ExpressVPN could be the VPN for you.

ExpressVPN is also unfailingly consistent with streaming services. In our experience, we’ve been able to access various streaming services and libraries from around the world in a matter of seconds, free of buffering and lag. Find out more in our ExpressVPN review, and try out the service yourself with its 30-day money-back guarantee.

NordVPN is well worth considering if you’re looking for a VPN with lightning-fast speeds to keep buffering at bay. We test VPN speeds daily, and NordVPN has consistently proven itself the fastest VPN overall, with ExpressVPN and Surfshark rounding out the top three. Better yet, NordVPN offers a selection of plans, some of which are very reasonably priced.

All that being said, we consider NordVPN a better VPN for streaming on a desktop than on a mobile device due to the map you use to change server locations. The mobile app can be a tad finicky, especially if geography isn’t your strong suit.

Other than that, NordVPN is another excellent choice and also offers a 30-day money-back guarantee. Find out more in our NordVPN review.

Windscribe — one of our recommendations for the best free VPN — is a decent option if you’d like to pair a secure free VPN with your Amazon Prime Video free trial. With Windscribe, you can get up to 15GB of free data per month (2GB on signup, 10GB when you confirm your email address and an extra 5GB if you tweet about Windscribe).

One of the strengths of Windscribe’s free plan is the wide variety of servers it offers, including free servers in Canada. If you want unlimited access to servers, though, you’ll need to upgrade to a paid plan. The same goes for data — 15GB won’t last long if you’re a regular streamer. Find out more in our Windscribe review.

Should I Watch the Citizen Kane Full Movie Before Mank?

If Citizen Kane is next up on your watchlist, we hope our guide on how to watch it from anywhere with a VPN has been helpful. A VPN is an invaluable piece of software for streamers because it can offer you a much wider selection of content from around the world.

Have you tried out a VPN with Citizen Kane? If so, do you plan to continue using one for streaming? What do you think of the mystery of Charles Foster Kane’s final words and his Xanadu mansion? Let us know in the comments. Thanks for reading.