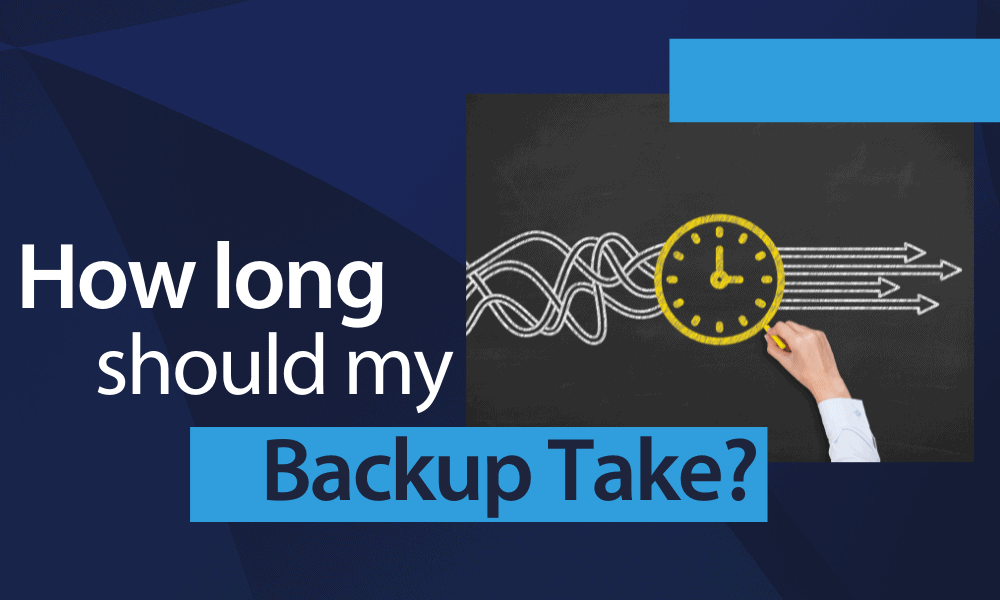 Securing an affordable online backup solution that has all the features you want, from file versioning to NAS backup, is a reasonably easy task. There are many such services that seem to really fit the bill, at least on paper (see our best online backup for home guide for examples).

The problem is that until you’ve run your backup for a few days, you won’t know just how good, or how maddening, your new disaster recovery tool actually is. One of the most frequent reader complaints we hear is of online backup solutions taking not just days or weeks to complete initial backups, but even months.

The good news is that some online backup solutions perform much better than others. Coming up, we’ll talk about some of the variables that can extend your backup time. Then, we’ll take a look at some of the fastest online backup tools we’ve used, including Acronis Cyber Protect Home Office.

Looking at faster solutions should give you an idea of how quickly a top service can move files from computer to the cloud. That, we hope, will arm you with enough information to know when your backup is working right or when it’s just wrong. We’ll also give you a few tips for better backup speeds, so you don’t have to deal with the wrong.

When it comes to slow speeds, initial backups are where you’re like to run into problems. Depending on the size of your hard drive and how quickly you acquire files, you could be backing up anywhere from 10 to 10,000GB. No matter what, backups on the high end are going to take a lot of time to finish.

The reason for the difference is that, historically, downloading data has been more common than uploading data. ISPs only have so much combined bandwidth to work with, and most of that goes to download speeds in order to promote consumerism. The prospect of waiting hours to watch Game of Thrones while Kodi buffers makes that seem like a pretty sound decision.

Amount of backup data and internet speeds should be the two biggest impacts on backup speed, in theory. However, that’s not the case in real life.

What’s Really Slowing Down Your Backup?

Speeds are slower than download speeds, a quick calculation will probably show that your backup would still complete in a reasonable amount of time if size and speed were the only impacting factors.

At 5Mbps, for example, 100GB should take about 48 hours to backup. A terabyte backup would take less than three weeks. Double your internet upload speed, and you cut that in half. Except, that doesn’t happen often.

Carbonite, on its website, states that the primary contributing factors to slow speeds are your own internet connection. If that’s the case, our 10Mbps upload connection would have taken a little over 14 minutes to backup a 1GB test file we sent Carbonite’s way. Instead, it took over three hours.

Reader woes documented in the comments of our Carbonite review suggest our experience isn’t unique. When you factor into all of this that we’ve run the same backup tests with other services — using the same test computer, same WiFi network and same test file — but with much faster results, it’s clear the problem isn’t us. It’s them.

What their problem is, exactly, is harder to pin down. It seems reasonable to assume that infrastructure is one issue. Many of the value-based online backup services in particular, like Carbonite and IDrive, tend to attract a lot of people with low subscription costs (read our IDrive vs Carbonite piece). However, those same services often have limited servers available, with only one data center to handle all of that internet traffic.

In any case, knowing that you might not actually be able to increase your backup speed by investing in a new router or faster internet service, you can focus on maneuvers more likely to lead to favorable results.

There’s not much you can do about the speed of a particular online backup service if the problem is mostly on its end. However, that doesn’t mean you’re stuck waiting for six months for your backup to never finish. Below, we’ve assembled a few quick ideas for getting your files backed up faster.

If the infrastructure of the online backup service is the biggest factor of backup speed, the easiest way to get faster backups is to find a service with better infrastructure.

There are a handful of online backup solutions that, in our testing, really stood out when it comes to speed. Unsurprisingly, these tend to be services that cost a little more and focus on backup for businesses, and in turn have deeper financial resources to put towards server facilities.

Acronis Cyber Protect Home Office is a great example. Acronis, which also markets Acronis Cyber Protect, one of the best online backup for business options, has a global network of servers. There are three data centers in the U.S. alone, and 12 total around and the world.

We tested Cyber Protect Home Office’s ability to backup a 1GB file, with around an 18Mbps upload connection over WiFi. The result was a backup that took less than 15 minutes. That means we could have potentially backed up 4GB an hour, which works out to around 100GB per day.

Another route you could take is finding an IaaS provider and incorporate that into your backup plan. IaaS stands refers to infrastructure as a service and can be used for anything from building an app, to cloud storage, to backing up hard drives.

Many IaaS services are built on powerful infrastructure, with Amazon S3, Microsoft Azure, Google Cloud and Backblaze B2 being four of the best. On top of that, you often get to choose your server location, so you can get one close to you. Leading the way, Amazon S3 has 53 availability zones in 18 geographic regions. Just like with Acronis, we’ve had some great speed tests moving data to Amazon S3.

The problem is that you need a way to do that. For backup, there are a few free options like Duplicati (read our Duplicati review) and Arq (read our Arq review) that tend to be pretty good. However, if you don’t mind spending a little for a one-time license fee ($30 for a desktop edition), CloudBerry Backup the best IaaS backup tool on the market today.

You can read our CloudBerry Backup review for more information. If you’re having trouble connecting it to Amazon or Azure, we have guides featuring CloudBerry for both:

Another options for fast backup is SOS Online Backup. However, as you can read about in our SOS Online Backup review, there are other reasons to look elsewhere, like the price tag. For low cost backup with decent speeds, we can recommend Backblaze.

It’s not going to be as fast as Acronis or CloudBerry Backup paired with Amazon S3, since the only Backblaze data center is in California. However, backups to Backblaze don’t drag like some similarly-priced options. Plus, Backblaze is by far the easiest backup service to use. See our Backblaze review for more details.

Find a Backup with Courier Service

Some online backup businesses overcome speed issues with a reasonable band aid: courier service. Unfortunately, in most cases, courier service costs money and, rather pointlessly for the purpose of this article, are only available for data recovery.

Of all the online backup services, IDrive has by far the best courier service, which is called IDrive Express. What makes IDrive Express great is that its available for both backup and recovery. Also, its free.

Under the terms of the program, IDrive will send you a 3TB external drive. You load the data on it, send it back, and IDrive technicians will transfer your data to a server. After that, it’ll be available to you in the cloud.

The reason IDrive Express works well is that local file transfers, over USB, are much, much faster than transfering files over the internet. Given this, there’s another option you can take for faster backups, which is to store files locally.

If you decide to build a local backup, you could go with an external hard drive. However, for the best protection, something capable of RAID, or redundant storage, should be considered. That likely means a network-attached storage, or NAS, device. Or, find an affordable server.

To be clear, officially we recommend a hybrid backup approach here at Cloudwards.net. That means using both online and local backup to get the best benefits of both. While faster, local backup devices are more susceptible to damage and failure than servers protected in a secure data center.

If you follow that advice, you’re still going to have to get your data online eventually. Lucky, both CloudBerry Backup and Acronis Cyber Protect Home Office support hybrid backup, making them good partners for NAS devices. See our best cloud backup for NAS article for more ideas.

When we talk about slow backup speeds, we’re usually talking about file-based backup. As mentioned earlier, one of the contributing factors to slow backup speeds is file compression, which online backup services use to limit required server space on their end.

To get around this problem, you could tweak your compression settings or eliminate it altogether, but very few online backups have this capability (Acronis Cyber Protect Home Office and CloudBerry Backup both do).

Another option is to use mirror-image backup, instead. Mirror-image backup means taking a snapshot of an entire hard drive, partition or group of folders. It’s a straight copy of your files, and that includes keeping files at their original size. So, no compression, and faster backup for you.

Not all online backup services can be used to create images. Lucky for you, we know which ones do, and have put together a best image-based backup guide. That guide, by the way, also includes CloudBerry and Acronis. We’re starting to sense a trend.

How long should your backup take? Well, how much money do you have? Slow backups are the Achilles heel of many otherwise very solid backups services. We mentioned Carbonite and IDrive as two examples, but the issue is much broader than that.

The best solution to the problem is, sad to say, money. Spend a bit more money than you would with Carbonite or IDrive, and you can get can save your files to the Acronis Cloud, instead, or any one of several capable IaaS solutions using CloudBerry Backup, Arq or Duplicati.

Our best advice, however, is to try a few services out to see which one works best for you. Acronis Cyber Protect Home Office has a 30-day free trial. CloudBerry Backup has one for 15 days. Most other services have trials, too, so you can checkout backup speeds before committing long term.

That’s our take on backup speed. We’re happy to hear other thoughts, of course, which you can hit us with in the comments, below. In particular, we’d love to hear about your favorite fast online backup solutions. As always, thanks for reading.