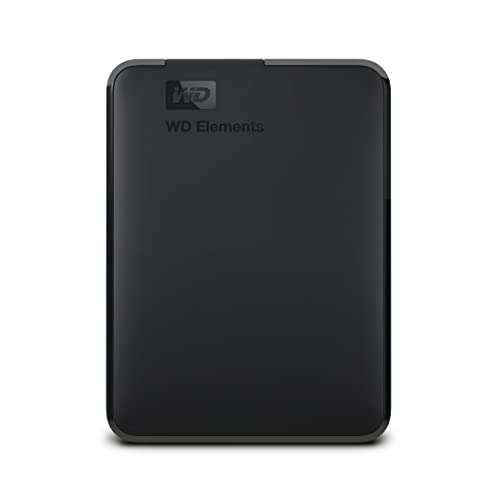 Western Digital is no stranger to the external hard drive game, offering a wide selection of products ranging from portable disks to multi-bay network-attached storage enclosures. In this review, we’re going to look at one of the products in the former camp.

Our Western Digital Elements review went simply. We bought a drive through Amazon and got our hands dirty with it, testing speed, errors and more. After talking about our experience with the drive, we’ll give you our verdict, which will determine if the Elements drives can make it on our best external hard drives list or if they’re just another mediocre option.

The answer is a bit of both. An Elements drive is a great way to get a lot of storage for cheap, but you’ll need to deal with the slow spinning disk, as well as a shroud that doesn’t inspire a lot of confidence. That’s true for most inexpensive external hard drives and, unfortunately, Western Digital doesn’t seem interested in going against the status quo.

The Elements drives are focused on portability, stripping away the bulky enclosures and power supplies of desktop hard drives in favor of a slim form factor. The plastic enclosure feels decent, with a plastic support running along the outside of the drive, but a few falls will likely put it out of commission.

That’s true for any spinning drive, though. The drive inside is insulated from whatever surface it’s on by four small, rubber feet, which, though handy, probably do less work than it’d seem. As the name and marketing suggest, Elements’ drives are supposed to be basic, so the mileage you get out of yours will largely depend on how you treat it.

If you’re hard on your drives or move them around frequently, make sure to read our LaCie Rugged Mini review. Though more expensive, the LaCie Mini comes with a weather-resistant shroud that can handle up to one ton of pressure.

In the Elements box, you’ll find the drive, an obnoxiously long legal agreement and a USB 3.0 cable that terminates with a USB type A connector. It would’ve been nice to see a cable for USB type C, as well, because they’re increasingly common. The performance wouldn’t change — the interface is still USB 3.0 — but that convenience matters.

The Elements drives are plug-and-play, meaning the necessary drivers to run them are included with your operating system. Out of the box, the drives are set to work with Windows 7, 8.1 and 10. It’ll work with macOS, too, but you’ll need to reformat the drive.

Plugging in the USB 3.0 micro B connector — the one that looks like two micro USB connectors smooshed together — results in a surprisingly satisfying click. The teeth that seal the connection grab on tight and don’t let go, which is reassuring with a portable drive.

We tested the 2TB model on Windows 10, so, unsurprisingly, Windows took the drive without hassle. What is surprising, though, is that the drive was empty. Usually, external hard drives come loaded with installers for things such as backup utilities and disk checkers. With an Elements drive, you get a blank canvas.

That could be a good or bad thing depending on what you like. For us, it’s a good thing, because we’d rather choose the tools we want to backup (read our best online backup guide to see what those are). That said, novices will likely be unaware that there are Western Digital utilities available, so having an installer preloaded could help ease confusion.

Critical tools are missing, including a backup and security utility. The moniker the Elements drives bear is telling. They’re meant to store data, and that’s it. If you’re looking for more features, it’s probably better to check out Western Digital’s My Book line (read our Western Digital My Book review).

The Western Digital Elements drives set the baseline in price when it comes to portable, high-capacity external drives. The 1TB model, which is the easiest point of comparison with the rest of the market, comes in at just under 5 cents per gigabyte.

Capacity-wise, you get four options: 1TB, 2TB, 3TB and 4TB. Western Digital advertises 250GB, 500GB and 1.5TB options on its website, too, but we weren’t able to find them. Though a decent spread, we’d urge you to stay in the 1TB-2TB range. The drives spin at 5,400 rpm, so larger capacities will be noticeably slower, especially when filled with data.

That’s where the Elements drives shine. For a solid amount of storage at a good price, choosing an Elements drive is defensible. Based on the range, the 2TB model offers the best balance of price and performance, with the 1TB model being too expensive per gigabyte of storage and the 3TB and 4TB models performing poorly when loaded with data.

We use multiple tools for testing the speed and performance of external hard drives. All the tools we use for testing are independent — meaning utilities such as Seagate SeaTools are off the table — and we perform our tests immediately after receiving the drive.

Starting with speed, we ran the drive through CrystalDiskMark using five passes and a 4GB test file. The results were good, at least for USB 3.0, but the interface is starting to show age. Compared to the Samsung T5 drive, which is solid state and transfers data over USB 3.1, there’s no competition (read our Samsung T5 review).

We also copied a 2.3GB test folder that was filled with videos, photos and music to the drive. It was surprisingly resilient, hovering around 100 megabytes per second for most of the transfer. In total, the transfer took 26.8 seconds.

Next, we moved onto error testing, starting with CrystalDiskInfo. The health status of the drive was “good,” which should be expected from a disk that’s brand new. As a preliminary test, CrystalDiskInfo is fine, but we wanted to make sure that all the nooks and crannies of the drive were fine, too.

With the “chkdsk” utility on Windows, we used the “/r” command to check for bad sectors on the drive. The process, which took just under three hours, resulted in no errors. The drive thoroughly scanned for bad sectors and, thankfully, nothing came up.

That said, it’s worth noting that any spinning drive will eventually fail. The small size of the Elements drives makes that more likely, too. Though still a great way to get a lot of storage for cheap, something like the G-Drive will hold up longer (read our G-Technology G-Drive review).

Like most of Western Digital’s products, there’s a limited warranty with your Elements drive. In this case, you get two years from the date of purchase to file for a repair or replacement, but as with almost all limited warranties, damage you inflict on the drive isn’t covered.

Additionally, there’s a support section on the website that shows FAQs for each particular drive. You’ll find troubleshooting steps for your OS not recognizing the drive and it being inaccessible, as well as guides for partitioning and formatting the drive on Windows and macOS.

If you’d like to speak to someone about your drive, you can call Western Digital free of charge. After the first call, you get 30 days to make as many calls as you want, but after that period, you’re out of luck.

Western Digital says everything you need to know in the name of this drive. Elements drives are meant to provide portable, inexpensive storage, and for that, they succeed. That said, if you’re looking for more bells and whistles or quicker speed, you won’t find them.

Instead, you’ll find a drive that’s ideal for storing documents and media but struggles when it comes to taking it on the go. The drive size is fine, but the fact that it’s a spinning disk is concerning. If you’re looking for solid state options or just want to shop around more, read our other external hard drive reviews.

What do you think of the Elements drives? Let us know in the comments below and, as always, thanks for reading.

Jacob Roach
Writer
Jacob Roach is a Midwesterner with a love for technology, an odd combination given his corn field-ridden setting. After finishing a degree in English at Southern New Hampshire University, Jacob settled back under the Arch in his hometown of St. Louis, MO, where he now writes about anything tech. His main interests are web technologies and online privacy, though he dips his toes in photography and the occasional card game as well. You can reach him at jacob[at]cloudwards.net.
Last published on Cloudwards:
Western Digital Elements
Editor Rating:
1 TB$ 49.662 TB$ 56.993 TB$ 98.994 TB$ 99.99