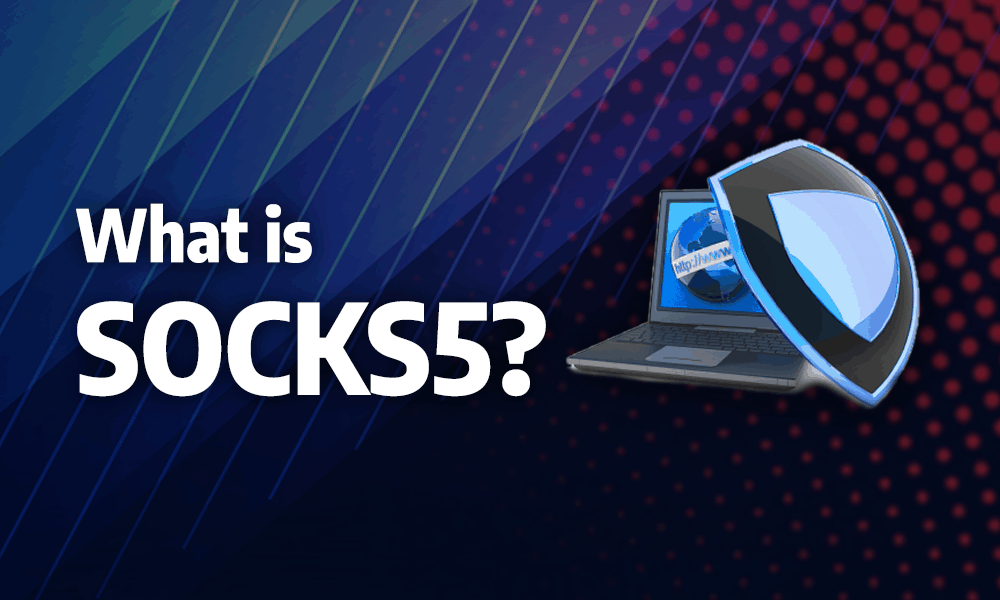 For anyone decently versed in tech, proxies are easy to understand: they simply pass your connection through a server to replace your IP address. That said, there are different types of proxies — some of which are included in our best free proxy guide — that can change different aspects of your connection.

One of those types is SOCKS, or, more particularly, SOCKS5. Throughout this guide, we’ll explore what SOCKS5 is, how it’s different from other types of proxies and how you can use a SOCKS5 proxy safely.

You shouldn’t, in most circumstances, use a proxy alone, but there are some reasons you’d want to consider a SOCKS5 proxy, particularly for torrenting. Read on to learn what a proxy is and how you can set one up with a virtual private network.

Before understanding SOCKS5, you have to understand what a proxy is. Thankfully, it’s a simple concept to grasp. Proxies act like a middle man for your internet connection. Prior to traveling to the open internet, your connection will go through the proxy, meaning any server after that point will treat your connection as if it came from the proxy.

In practice, that means if you’re trying to watch U.S. Netflix from, say, the UK, the Netflix servers will detect the U.S. proxy, not the UK address. As you can read in our guide to the Netflix VPN ban, that’s not entirely true because Netflix can usually detect you’re using a proxy. That said, for a theoretical demonstration, let’s assume it’d work.

SOCKS5 is an internet protocol that can be used to connect to a proxy, much like a VPN protocol. If you see a SOCKS5 proxy, it does the same thing as any other proxy, but the way in which the connection is facilitated is different.

Though tech novices might not see that as a major difference, SOCKS5 proxies perform a much different function than HTTP proxies. SOCKS5 proxies are traffic agnostic, meaning they simply pass whatever traffic you’re sending through the server and to the recipient.

That’s true for any SOCKS server. SOCKS5 has the advantage of authentication, though. Instead of just connecting to the server, your browser needs to perform a network “handshake” with it, establishing you are who you say you are and opening the connection.

HTTP proxies work differently. Though they still act as middlemen, HTTP proxies can and do interpret the traffic you’re sending through the server. Because of that, some data can be cached and delivered more quickly, with the downside that it can only process HTTP traffic.

For individual users, SOCKS5 proxies are generally best because of their authentication and acceptance of any type of traffic. That said, HTTP proxies have their place if you’re, for example, setting up a bot through a proxy to scrape website data.

Use Cases for SOCKS5 Proxy

There are many reasons you’d want to replace your IP address, but it most cases, it comes down to geoblocks. “Geoblocks” is a term that refers to the process of blocking traffic from certain countries, effectively restricting who can see what online. While not censorship per se, it’s a cousin.

Geoblocks are particularly prevalent among streaming platforms. For example, Netflix has different libraries depending on where you connect in the world (read our best Netflix hacks guide to see how to access them), and BBC iPlayer is only available to UK residents (read our best VPN for BBC iPlayer guide).

Proxies aren’t the best for trying to bypass geoblocks, though, because those who impose the geoblocks have ways to detect you’re using one. We’ll talk about that in the next section.

That said, SOCKS5 proxies, in particular, are great for torrenting. Torrenting, if you’re unaware, refers a peer-to-peer connection for downloading files. Essentially, your computer is connecting to multiple computers and downloading a slice of the file from each.

Outside of the legal issues that can come with torrenting (read our is torrenting illegal guide for more on that), there are speed issues, too. Torrenting requires a lot of bandwidth, which can cause your internet service provider to restrict the amount of data you can transfer at once.

SOCKS5 proxies help with torrenting for two reasons. The first is that your IP address is replaced, meaning your ISP shouldn’t be able to throttle your speed. You should be using a SOCKS5 proxy with a VPN to ensure that your ISP can’t throttle your traffic, but we’ll get to that in the next section.

The main advantage is that SOCKS5 proxies offer users full UDP, meaning you can connect to each peer in a swarm. By connecting that way, you’ll usually be able to download files faster because you’ll receive bits of the file from all the peers at once.

That said, your connection still won’t be encrypted while using a SOCKS5 proxy, which is a problem when torrenting. For that, you’ll need a VPN. Continue on to learn about VPNs, why they’re better than proxies and how you can use the two together.

Though SOCKS5 proxies provide authentication, they don’t provide encryption. As is the case with any proxy, no additional security is provided, so what you bring is what you get. HTTPS proxies, which handle traffic for an SSL/TLS connection, provide encryption, but no more encryption than a normal internet connection.

If you’re unfamiliar, encryption refers to scrambling your data while its in transit so that no one in the middle of the network chain can see what you’re sending. It turns requests from plaintext into ciphertext using an algorithm and key pair. You use one key to encrypt the data and the recipient uses the other key to decrypt it.

Our description of encryption goes into the specifics of the process, but that’s a general overview. Proxies don’t provide any additional encryption, but VPNs do. Similar to a proxy, your connection is routed through a remote server, replacing your IP address and geolocation information. That said, your initial connection to the remote server is encrypted.

That’s important because an encrypted initial connection makes route tracing difficult, if not impossible. SOCKS5 proxies, because they don’t provide encryption, allow the recipient to route trace, which enables them to see the source of the traffic beyond the proxy. With a VPN, though, the remote server becomes a stone wall.

Your original requests are encrypted, meaning your source IP address is hidden from just about anything. Though there are variations in VPN security, as long as you’re using a provider from our most secure VPN guide, you’ll be fine.

ExpressVPN ranks at the top of that list. In addition to being the fastest VPN we’ve tested, it took first place in many categories in our best VPN guide. From security to speed to user-friendliness, ExpressVPN gets everything right. You can learn more in our ExpressVPN review or try it with its 30-day money-back guarantee.

Though it’s the best for most things, ExpressVPN isn’t the best for everything. For example, if you’re interested in torrenting, our best VPN for torrenting, NordVPN, might be better for you. Though it’s not as impressive when it comes to speed, NordVPN stands apart from ExpressVPN with a range of specialty servers.

Among the list are P2P (torrenting) servers, obfuscated and DoubleVPN. That said, for the purposes of this article, it has another advantage. You can use a SOCKS5 NordVPN proxy with a VPN connection, which, as mentioned, should provide the best performance when torrenting.

You can learn more about NordVPN in our NordVPN review or see how you like it with its 30-day money-back guarantee.

SOCKS5 proxies are the best option for most users, but they still come with the downsides described here and in our VPN vs. proxy vs. Tor guide. That said, you can still use their power, especially for torrenting, if you use the SOCKS5 proxy in conjunction with a VPN.

NordVPN is among the few that provide the functionality. That said, if you’re not interested in torrenting, a SOCKS5 proxy is usually worse than a fast VPN, and for that, ExpressVPN reigns supreme.

What are you using a SOCKS5 proxy for? Do you have a VPN, too? Let us know in the comments below and, as always, thanks for reading.