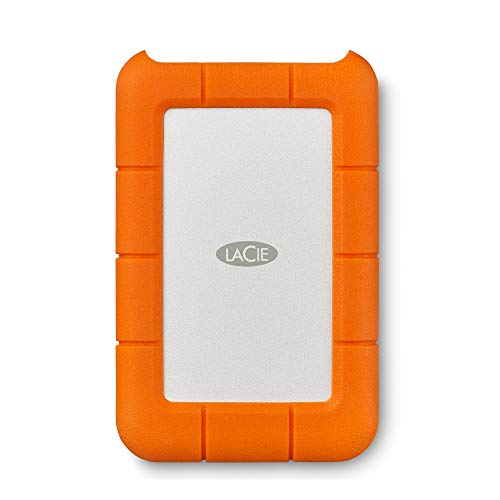 Anyone who hasn’t heard of LaCie would probably recognize some of the products it makes. The orange band that surrounds its Rugged series of disks is iconic, showcasing that the drive can withstand even the toughest of beatings. We’re going to look at the most accessible option in the lineup in this LaCie Rugged Mini review.

If you’re unfamiliar, LaCie is owned by Seagate, so many of the tools and features are comparable to Seagate disks. The LaCie range, as opposed to the Seagate range, focuses on form factor and performance above all else, which is shown by its sets of Porsche Design drives and d2 desktop backup disks.

That said, the Rugged Mini doesn’t showcase either. Though the casing can handle the harshest environments, the performance leaves a lot to be desired, and considering the price is much higher than some competing drives, it’s a tough sell. Even so, if you’re hard on your drives or use them in rough conditions, a Rugged Mini might be the best external hard drive for you.

If anything’s clear when unboxing the LaCie Rugged Mini, it’s that the drive can take a beating. The iconic orange band is stiff, ensuring that your drive will remain usable if it takes any unfortunate falls. Under the shroud, it looks like any portable hard drive. Unlike the Western Digital Elements, though, the casing is all metal (read our Western Digital Elements review).

That said, most of the price goes into that casing, which we’ll look at in the next section. In the box, you get the drive, a USB type A to micro type B cable and a USB type A to type C cable. Though the drive doesn’t operate over USB 3.1, you can still plug it in to a USB type C port for convenience.

Though bog standard in almost every regard, the casing is what sets a LaCie drives apart. The disks are meant to go where you go, handling the roughest of environments with ease. Your dollar isn’t buying extra performance, but rather the ability to ensure your data is kept safe.

It’s not just a general idea, though. LaCie gives specific limits on its product page for what a Rugged Mini can handle. The drive is rain resistant, can absorb the shock of drops of up to four feet and can last under about 2,205 pounds of pressure.

Well, it’ll open a registration page, which we recommend taking a look at. Not only will you register your drive for warranty support, but you’ll also be able to purchase up to three years of data recovery for $15 and download Toolkit, which we’ll look at in a minute.

As mentioned, part of the setup process is downloading Toolkit, which is an all-in-one hub for the Rugged Mini’s features. Before getting to that, though, you’ll have to go through LaCie’s setup process, which will format and optimize your drive for the OS you’re using.

One glaring omission, though, is password protection, despite LaCie’s claims that the Rugged Mini offers it on the product page. We installed every application available for the Rugged Mini and couldn’t find a place to set a password. Upon googling the process, we found out that it’s a feature for the LaCie Rugged Secure, not the Rugged Mini.

That’s a shame, considering the drive is protected on every other front. A Rugged Mini might be a great option for taking data on the go, but if you’re looking to lock down your backups, you’ll want to consider a secure online backup provider, such as Backblaze (read our Backblaze review).

As mentioned, Rugged Mini drives are more expensive than other black box competitors, with almost all the extra cost going to the enclosure. There are only three capacities available, but they offer a solid range for those who need storage on the go.

Going up the line, the Rugged Mini’s 2TB model is more reasonable, but still almost twice as much as other black box external drives. That said, the 4TB model isn’t bad. Though still more expensive than a Western Digital My Book or Seagate Backup Plus Portable, the upcharge is slight, and given the Rugged Mini’s, well, rugged exterior, the extra cost is worth it.

What’s tough about this section is that a Rugged Mini doesn’t offer a significant performance benefit. The drive still spins at 5,400 rpm over USB 3.0, and we’ve seen other options do the same thing for much less money.

Because of that, it’s clear the extra cost is tied to the metal cover and orange band around the drive. Those features shouldn’t be discounted, especially if you’re throwing your drive around a lot. That said, for those who have a light touch or can keep an eye on where their data is going, it’s overkill, and so is the price.

We run external hard drives through a series of four tests to determine performance. Two of those tests are for speed and two are for errors, with each category receiving a hands-on test and a benchmark.

Starting with speed, we ran our drive through CrystalDiskMark using a 4GB test file and five passes. Our Rugged Mini struggled a lot, clocking in with a reasonable but unimpressive sequential read speed and an unacceptable sequential write speed. Random reads and writes were fine, but we’ve seen faster performance with Western Digital drives.

Our hands-on test, which consisted of copying a 2.3GB test folder and timing the transfer, was abysmal, too. It took our drive a minute and 14 seconds, with a decent amount of inconsistency. For comparison, the much cheaper Toshiba Canvio Basics drive we tested transferred the file in just over 16 seconds.

That testing was done without LaCie’s optimization, so we went back and ran the tests again after optimizing the drive. Unsurprisingly, there was little to no performance benefit. Our hands-on test was more consistent, but the speed was just as slow, and CrystalDiskMark clocked speeds similar to what we saw before.

If speed is a concern, the Rugged Mini won’t deliver. It’s similar in performance to a lot of black box drives, but the transfer rate is horrid. For those who need a quick drive for video editing and the like, you should probably stick with an SSD, such as the Samsung T5 (read our Samsung T5 review).

Thankfully, our error checking went without a hitch. We monitored the drive using CrystalDiskInfo throughout our testing to see if the drive got hot or if errors popped up. Everything was good, and our extended error testing, which consisted of a two-hour stress test using the “chkdsk” utility, backed that up.

LaCie Rugged Mini drives come with a two year limited warranty, which is detailed in the included product manual and the .pdf that’s preloaded on the drive. It’s the same warranty that’s seen on Seagate drives, which means it only covers faults in workmanship or material.

Any other issue, such dropping, submerging or otherwise damaging the drive, isn’t covered under the warranty, which shouldn’t be a big issue considering Rugged Mini drives are built like tanks. Even so, if you happen to break through the barrier and damage the drive, it won’t be covered under warranty.

As for support, LaCie offers a few knowledgebase entries that cover frequently asked questions, troubleshooting guides and how-tos. You can also speak with a support rep by phone or email if you have a specific question.

Given the rugged nature of the drive, we expected more from support. Instead of guaranteeing the drive can stand up to forces of nature like LaCie claims, you’re left with a standard warranty that can be seen on other Seagate products. The support is better than what you’ll get with most external disks, but we hoped for more with a product like the Rugged Mini.

Rugged Mini drives tell you everything you need to know in the name. They’re built to last and they’re small, which is a hard combo to find. That said, the performance is mediocre. There’s a specific set of people who’ll want a Rugged Mini drive, but if you’re just looking to take a few things on the go, there are faster and cheaper options.

That said, if you’re dumping photos while shooting a wedding or throwing the drive in a backpack while traveling, the protection shines. Either way, we suggest reading our other external hard drive reviews to see if the Rugged Mini is the best choice for you.

What do you think of the LaCie Rugged Mini? Is the casing worth the extra cost? Let us know in the comments below and, as always, thanks for reading.

Jacob Roach
Writer
Jacob Roach is a Midwesterner with a love for technology, an odd combination given his corn field-ridden setting. After finishing a degree in English at Southern New Hampshire University, Jacob settled back under the Arch in his hometown of St. Louis, MO, where he now writes about anything tech. His main interests are web technologies and online privacy, though he dips his toes in photography and the occasional card game as well. You can reach him at jacob[at]cloudwards.net.
Last published on Cloudwards:
LaCie Rugged Mini
Editor Rating:
1 TB$ 79.992 TB$ 99.994 TB$ 149.26