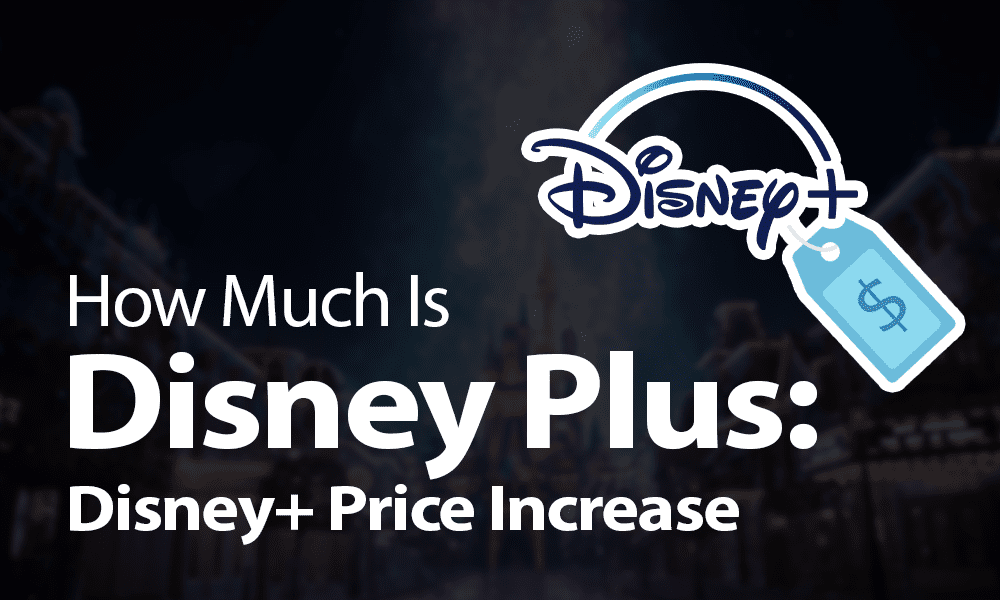 Disney+ first graced our screens back in November 2019, and it has since become a streaming service favorite. You can watch a ton of original feature-length films, plus documentaries, series and much more — and not just from Disney, but also Marvel, Star Wars, Pixar and so on. With all that great Disney content, you might be wondering: How much is Disney+?

Well, it’s a good question because, since its initial launch, the Disney Plus subscription cost has increased. The price hike came into force in August 2021, though some subscribers benefited from a delay if they were based in a specific country or signed up before February 23, 2021.

In this article, we’ll go over the standard Disney Plus cost and its Premier Access option, what’s included and how you can subscribe. Plus, we’ll find out if there are any Disney+ free trials, what bundles are available and how it compares to other streaming services. Let’s dive in.

How Much Is Disney+?

Disney Plus is a one-size-fits-all type of subscription. There are no tiers to pick from; you simply subscribe and that’s it. When it first launched, it cost just $6.99 per month or $69.99 annually ($5.83 per month), which was significantly lower than other streaming services, such as Netflix.

Even after the Disney Plus price increase, though, the cost is much lower than other competitors. Right now, the U.S. Disney+ price is just $7.99 per month or $79.99 annually ($6.66 per month). If you look only at the annual membership price increase, it seems pretty steep, but when you split that over 12 months, it works out to less than a dollar increase.

For customers, that’s still a pretty good deal, and considering that Disney+ has more than 100 million annual subscribers, we’re quite sure that they’re happy with that small increase, too. You can read our streaming services statistics to learn more about Disney+’s susbcribership.

How Much Does Disney+ Cost Around the World?

How Can I Get Disney+ for Free?

First, let’s talk about refunds. Unfortunately, Disney Plus doesn’t generally offer refunds. That’s not to say you can’t cancel your subscription — you can easily do that at any time.

However, you won’t get a refund for any time left in your billing period, but you will be able to watch content until that billing cycle ends. If for any reason you do want a refund, you’ll need to speak to a customer service representative.

There’s no great news about a Disney Plus free trial either. At launch, you could bag yourself seven days of free Disney streaming, but for most countries, that ended in June 2021. Japan’s free trial lingered for a while, but after looking with the help of one of the best Disney Plus VPNs, that seems to be gone now, too.

There are a couple of other ways you can watch Disney Plus for free, though they might not suit everyone. We’ll talk about them below, but if all else fails and you still want to catch a glimpse of Disney+ in action, your best bet is to sign up for one month. It’ll cost just $7.99 and you can cancel at any time, but it’ll be enough to see if you like it without breaking the bank.

Disney Plus: Free With Verizon

New Verizon Unlimited customers can get six months of Disney Plus for free. It’s with selected Unlimited plans — and only available for those in the U.S. — so not everybody will be able to grab the deal, but it’s definitely worth checking out.

Once the free period has ended, you’ll automatically be transferred to the monthly plan at $7.99, so be sure to cancel if you don’t want to pay.

What Is Included in a Disney+ Subscription?

Since Disney Plus has a one-size-fits-all subscription, every customer gets access to the same content. OK, so content might differ a little in some countries, but that could be down to existing contracts with regional services and for the most part, Disney Plus’ worldwide content will be pretty much the same.

A good example of that is Disney’s Star content. It’s available with a Disney Plus subscription, but only in around 17 countries, such as the U.K., Canada and Australia. It’s not available with Disney Plus in the U.S., though, because most of the Star content is already available to watch on Hulu — a good reason to get that Hulu-Disney+ bundle.

Still, you’ll have access to all the content available in your region, except for Premier Access movies, which we’ll talk about in the next section. Many titles are in 4K UHD and HDR, and everything is ad-free, too, so no annoying breaks in between. You also get unlimited downloads for up to 10 streaming devices and you can stream on up to four devices simultaneously.

What Shows and Movies Are Streaming on Disney+?

With that aside, let’s talk about the type of content you get. Disney is known for its classics, such as Cinderella, Star Wars, Toy Story and even High School Musical, and you’ll have access to almost all of those films. We say almost because some films, such as Song of the South, have been held back from the service due to “outdated cultural depictions.”

Still, you will have access to new releases, originals and series from a host of creators like Disney itself, National Geographic, Pixar, Star Wars and Marvel shows and movies — including Marvel Cinematic Universe, Captain America: The Winter Soldier and Moon Knight.

Some content is exclusive to Disney+ too, such as the Loki series, The Mandalorian, Luca and Raya and the Last Dragon. There’s also some Fox content, like The Simpsons and Family Guy.

Overall, you’re looking at more than 7,000 TV series episodes and around 500 movies. Its library will more than likely keep growing too, providing a ton of content that has something to suit every family member.

Now, although we did say that Disney Plus has just one tier in its subscription plan, there is an extra perk you can pay for if you want it. It’s called Premier Access and it lets you pay for early access to theatrical releases before they’re made available to all Disney Plus subscribers. So, you can watch one of the latest Disney movies from the comfort of your own home. All you need to do is choose the movie and pay the fee.

Disney Plus Premier Access costs $29.99 per movie, but you can re-watch it as many times as you like. Disney+ Premier Access is only available to Disney Plus subscribers, and if you want to use GroupWatch — where you can stream with up to six friends — you’ll all need to have unlocked Premier Access for the same movie.

All you need to do is select the Premier Access title and choose either “preorder” or “unlock now.” Then, simply go through the payment process for Premier Access and select “play” to start streaming. You can also preorder Premier Access films and watch them once they’re available.

Remember that if you’re a little short on money, Disney Plus Premier Access films will become available to regular Disney+ subscribers soon after — usually around three months.

How Do I Get a Disney+ Bundle?

As much as Disney Plus is great for streaming Disney shows and movies, you might want to watch some different entertainment or perhaps some sporting events. That’s where the Hulu-Disney Plus-ESPN+ bundle comes into play.

By bundling all three streaming services together, you save some money, too. Plus, your bundle can either include Hulu with ads for $13.99 per month, or Hulu without ads for $19.99 per month.

We have a complete ESPN-Hulu-Disney Plus bundle setup guide, but all you really need to do is sign up through either the Disney+ or Hulu website. If you’re already subscribed to one or more of these services, you can still sign up and the cost will be adjusted.

We should point out, though, that this is a U.S.-only bundle, so you need a U.S. address and payment method to sign up.

How Does Disney+ Price Compare to Other Streaming Services?

Right off the bat we can see that Disney Plus is a little cheaper than Netflix — even though there was a Disney+ price increase. Plus, you don’t need to pay more to get HD or 4K content with Disney Plus.

Hulu is actually cheaper, but only if you don’t mind watching ads. As soon as you pick the no-ads option, it’s almost twice the price. However, Hulu has great original series like The Handmaid’s Tale, and almost anything classed as “mature” content from Disney, such as Deadpool, goes straight to Hulu.

Amazon Prime Video costs almost the same as Netflix’s standard price, but you don’t need to upgrade for better quality streaming. HBO Max is more expensive, but it has a great lineup, including original shows such as Mare of Easttown.

Lastly, BBC iPlayer is free, but you might need to use a BBC iPlayer VPN since it’s not available outside of the U.K.

Subscribing to Disney Plus is easy. It’s available in more than 50 countries, covering North America, Latin America, Europe and Asia/Pacific. If you’re not based in one of those countries or you’re traveling, though, it’s possible you could watch Disney Plus with a VPN. Just remember that for some countries, such as the U.S., you need a country-specific address and payment method.

With that out of the way, let’s go through the steps for setting up a Disney Plus account. You can sign up on a browser, mobile device or TV-connected device, such as Roku TV, Amazon Fire TV or Apple TV. However, if you sign up through either the Google Play Store or the Apple app store, it’s an in-app purchase and you will need to make any future changes to your Disney Plus subscription there.

We’ve provided a step-by-step guide below on how to subscribe to Disney Plus via a browser as this route allows you to pay via debit/credit card or PayPal.

We hope our guide has helped you understand how much Disney Plus is and has given you a lot more insight into the service.

If you’re looking for a streaming package that offers a wider selection of content, we recommend opting for the ESPN-Hulu-Disney Plus bundle. With that, you’ll not only get top Disney titles, but you’ll also get more adult-tuned content and sports.

Have you subscribed to Disney Plus? Do you think the streaming service is worth it? Have you opted for the Disney Plus-Hulu-ESPN+ bundle instead? Let us know in the comments section and, as always, thank you for reading.